Aviation and defence supplier, AAR Corp, reported a 5% reduction in sales for 1QFY2009 (three months ended 31-Aug-2009) and a 50% reduction in net profit, to USD10.2 million. The results beat market estimates, sending the company’s shares up 11% on Tuesday, the biggest single day gain for the company for more than two months.

David P Storch, Chairman and CEO, commented that defense and government services businesses produced steady results (with revenue up 4%), while weak conditions in commercial markets put pressure on sales and margins in the company’s aftermarket businesses supporting commercial airlines. Commercial sales have lagged during the quarter, down 12% year-on-year, due to further reduced inventory levels and maintenance visits by airlines in response to weak economic conditions and tight credit markets. Commercial customers represented 56% of revenue during the quarter.

The company reported lower margins in the Aviation Supply Chain and MRO segments, while reporting a consolidated gross profit margin of 15.8% (compared with 18.7% in the same quarter last year). During the quarter, the company sold its interest in its only aircraft leveraged lease, further reducing its number of wholly-owned aircraft to five aircraft, and taking a USD800,000 loss on the sale.

Despite the ratings adjustment, B/E Aerospace continues to trade upwards, gaining 2.8% yesterday. The company is at a year-to-date high of USD20.77 per share, after hitting a low of USD6.51 per share in Mar-2009.

MTU Aero Engines’ Berlin-Brandenburg maintenance renewed a license agreement with GE Aviation for MRO on CF34-3, -8 and -10 engines, extending the until 2022. Over the life of the agreement, MTU expects the deal to generate sales in the amount of more than EUR500 million.

MTU Aero Engines' share have lost ground this week, despite Goldman Sachs raising its target price for the stock from EUR33.30 EUR44.50 on 18-Sep-2009, and reiterating its "buy" rating for the engine manufacturer. Goldman Sachs' target price increase reflects expectation that the news flow from the airline and aerospace industries would "continue to improve over the next year, which should help drive civil aerospace stocks higher.” The stock was up 0.1% yesterday, to EUR30.75 per share.

Goldman Sachs has suggested that MTU could be a possible takeover target in the future, and expects the company to benefit from improving air traffic and an improvement in the general economy and improved aircraft delivery forecasts. 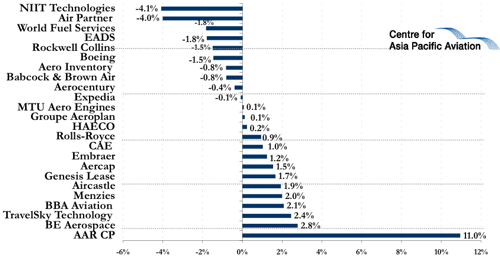