However, he warned that “airlines are still facing significant challenges” and that “recovery still looks quite fragile”, with shrinking traffic volumes, combined with lower yields, negatively affecting revenues and profitability. Mr Herdman added that despite capacity cutbacks and other cost reduction efforts, "airlines are still struggling to restore profitability”.

Passenger reductions only marginal in Sep-2009

AAPA members carried a total of 10.8 million international passengers in Sep-2009, a 0.2% year-on-year contraction. It effectively matches the numbers carried in the same month in the preceding year for the first time in over 12 months. 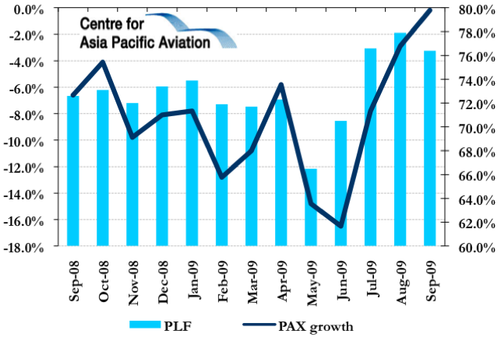 Traffic (RPKs) in Sep-2009 declined 0.9%, although this marked a “significant improvement” compared to the steep monthly declines recorder over the past 12 months. 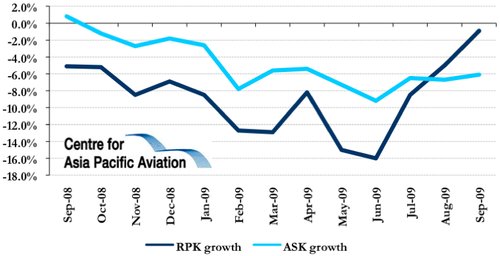 In the month, AAPA international freight tonne kilometers (FTKs) were down 6.5%, for the smallest shortfall so far in 2009. It is an improvement from a contraction of 12.2% in the previous month and an improvement from the accumulative decline of 18.1% in the nine months to Sep-2009. The average international cargo load factor rose 3.4 ppts to 68.7% in the month, as carriers cut capacity by 11.2%. 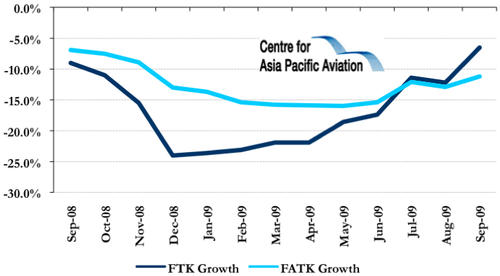 In attempting to navigate their way through the current crisis, Asia Pacific airlines have been cutting capacity, focusing on cost reduction efforts and discounting fares to stimulate demand in a weak demand environment. While this strategy has had some success in stimulating demand, it has also placed considerable pressure on yields, resulting in “sharply lower revenues and heavy losses for most carriers”.