A350/787 in China: Airbus and Boeing book more orders, Sichuan Airlines to be first A350 operator

Since a number of orders placed over the past 15 months, Airbus' A350 has narrowed the gap with mainland Chinese airlines compared to Boeing's 787. Yet the 787 is still outselling the A350 nearly two to one: in service, and on order, 787s total 136 (with five options), compared to 71 for the A350. A handful of smaller airlines, without widebody experience so far, have ordered next generation widebodies, so there is a risk that some orders may not eventuate – or airlines will be merged, and orders consolidated.

Only three airlines – all state-owned, Air China, China Eastern and China Southern – have ordered both the A350 and 787.

While the first of a new aircraft type typically goes to a state-owned airline, and often Air China, it appears Sichuan Airlines will be the first in mainland China to receive the A350. The A350 will enable Sichuan to open nonstop services to North America, potentially in competition with Hainan Airlines.

At the same time, China Eastern is deciding how to allocate its overlapping fleet of A350s and 787s.

A350 narrows the gap, but the 787 has nearly twice as many orders

Airbus and Boeing had a busy early summer disclosing acquisition plans for their respective next generation widebodies – the A350 and 787.

Boeing now has 136 787s in service or in various stages of being ordered.

Airbus has 71 A350s known to be planned for acquisition. This excludes Lucky Air, which plans to operate A350s but has not disclosed further information. Air China was long the A350's only mainland Chinese customer, but there has been significant activity over the past 15 months.

An Apr-2016 order from China Eastern was followed by China Southern, A350 acquisition plans from Sichuan Airlines, and then an A350 placement from HNA.

The A350 is known to have orders from seven airlines, while the 787 has orders from 10 but is expected to have 11 operators, since China Eastern is expected to allocate 787s to Shanghai Airlines. HNA-affiliated airlines are counted individually.

Only three airlines – Air China, China Eastern and China Southern – have ordered both the A350 and 787. This is fairly concentrated overlap, considering the limited number of airlines globally that are operating both types.

Although the three state-owned Chinese airlines will find strategic functions for each type, ordering both types is largely the result of government pressure to split orders. The orders are not always split evenly, but the total calculation is complex – for example, ordering more widebodies from one manufacturer but more narrowbodies from another.

The split orders are one reason why the airframers take greater interest at private airlines, where the mentality is ''winner takes all'. 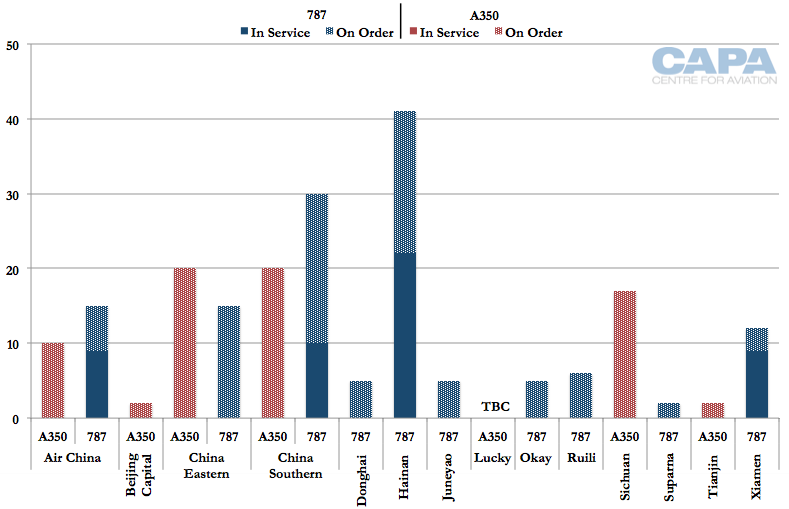 Sichuan Airlines to be first A350 operator in China

The first of a new aircraft type in mainland China usually goes to a state owned airline – and often Air China. However, it is likely that Sichuan Airlines will be the first A350 operator in mainland China. This is apparently because CAAC North, the bureau overseeing Air China (and the other A350 operator, Beijing Capital Airlines), does not intend to take the lead in overseeing and certifying the A350 for China. Instead, CAAC Southwest (overseeing Sichuan Airlines) will certify the type.

Sichuan Airlines plans to operate A350s on nonstop flights to North America. The airline serves Vancouver and Los Angeles on one-stop A330 services through various northeast and eastern Chinese cities. Sichuan Airlines was China's first secondary airline to go long haul, and was the first to fly long haul from a secondary Chinese city.

Sichuan being able to fly nonstop to North America is an area to watch, because Hainan Airlines has applied for nonstop Chengdu-North America designation. While Hainan was first – and with 787s already has the capability to fly nonstop – Sichuan Airlines is the home airline for Chengdu and Sichuan province. Sichuan Airlines has direct/indirect ownership from all three state-owned airlines: Air China, China Eastern and China Southern. Its growth and even partnerships/alliance membership is often subject to jockeying among the conflicted shareholders.

Sichuan Airlines is the second largest domestic operator at Chengdu, with 19% of available seats. The largest is Air China, with 29%. Internationally, Sichuan is largest with 19% and Air China second largest, with 15%. System capacity is weighed by domestic exposure, and Air China (28%) is larger than Sichuan (19%). 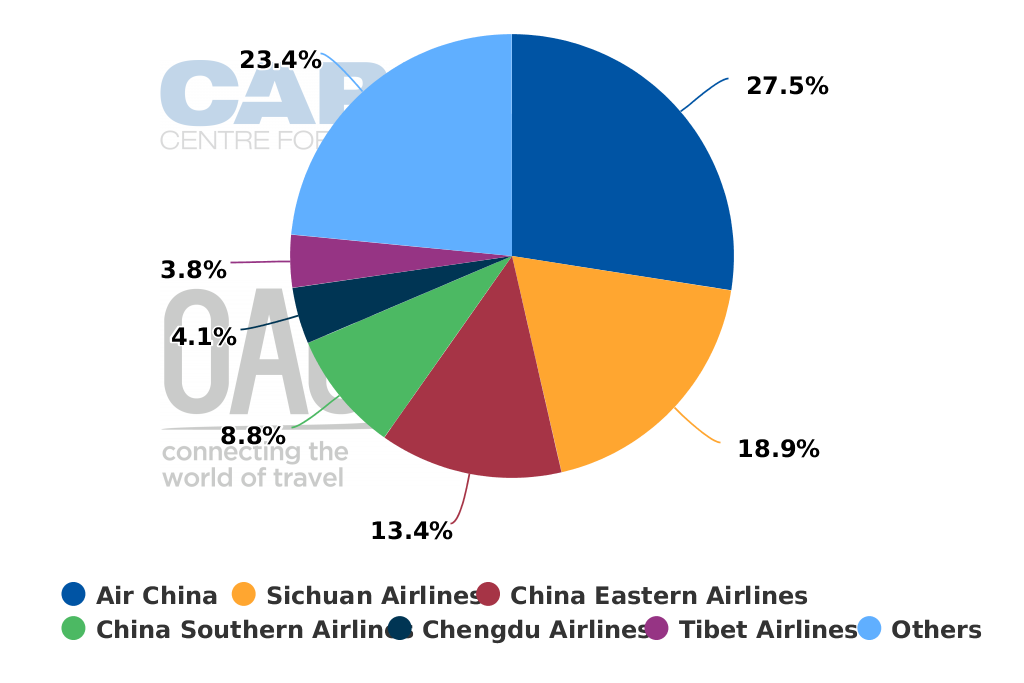 The smaller 787 is better suited to thin markets. Delta, which has a minority stake in China Eastern, advised on the order. Delta and China Eastern could simultaneously deploy A350-900s on Shanghai-US routes. Delta received its first A350 in Jul-2017.

Shanghai Airlines' widebodies have not had a scheduled service outside East Asia in recent years, aside from leisure flights to Male in 2015 and 2016. However, Shanghai Airlines aircraft can be substituted for China Eastern-operated flights – such as to Melbourne. 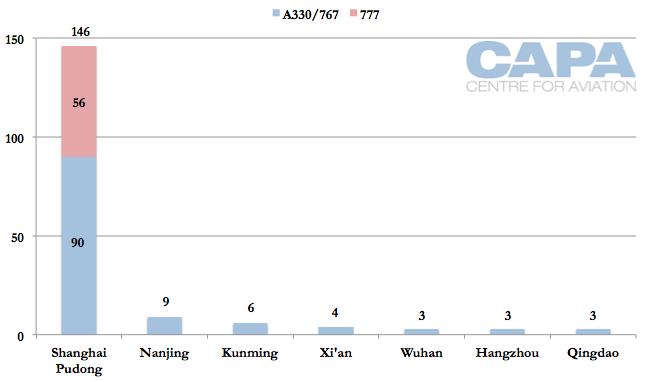 Outlook: most next gen widebodies are for growth

There are more next  generation aircraft on order for Chinese airlines than in service.

Chinese airlines have largely re-fleeted already, so the aircraft mostly represent growth for coming years. Some could be used as replacement for older A330s or deployed to domestic and international markets, but this is expected in only a minority of cases.

Further orders will be due again in the medium term, since Chinese airlines tend to order only a few years ahead.