Philippine Airlines (PAL) has become the latest airline to phase out A340s, operating its last A340-300 scheduled flight at the end of Sep-2018 without fanfare. PAL accelerated the retirement of its last four A340-300s, a sensible decision given the recent rise in fuel prices.

There are still 156 A340s in commercial operation, according to the CAPA Fleet Database. However, there are no more aircraft of the type in Asia, where only five years ago there were 11 operators.

The size of the active A340 fleet has been cut in half over the past seven years. More retirements are likely as rising fuel prices force airlines to re-examine the economics of ageing four engine aircraft.

PAL has quietly parked its last four A340s over the past month. The airline phased out two A340-300s earlier this year but was initially intending to keep four aircraft operating until at least 2019. However, PAL decided recently to pursue an accelerated and rapid phase-out.

Cathay Pacific and China Airlines were the last two Asian operators (before PAL) and phased out their A340-300s in 2017, according to the CAPA Fleet Database. China Eastern and Thai Airways were the last Asian operator of the newer A340-600, retiring their last aircraft in 2015.

Of the 379 aircraft built, 180 are currently in service

Although the A340-500 and -600 entered service a decade after the -200 and -300, there are only 72 currently in active service, according to the CAPA Fleet Database. This includes only 63 commercial aircraft, since nine are in government or VIP service.

Airbus built 132 A340-500s and -600s with production running from 2002 to 2010. The youngest commercial A340 is a -600 operated by Iberia that is only nine years old. There are only 10 A340-500s in operation, and only three of these are in commercial operation (two at Azerbaijan Airlines and one at the Portuguese wet lease/charter operator Hi Fly).

Lufthansa is the largest operator

PAL was one of the airlines operating the A340 the longest

The six newer model A340-300s were all ex-Iberia aircraft that had been manufactured from 1999 to 2002. There were in a slightly different configuration from PAL’s original A340-300s and had more modern – but still outdated – inflight products. These six aircraft were configured with 218 economy seats in 2x4x2 configuration and 36 recliner style business class seats in 2x2x2 configuration.

PAL has orders for another three A350-900s. One is slated to be delivered within the next few weeks and the other two in 1H2019.

The phase-out of the ageing A340s means PAL’s oldest widebody aircraft is now nine years old. Of the 28 aircraft, 25 are less than six years old. 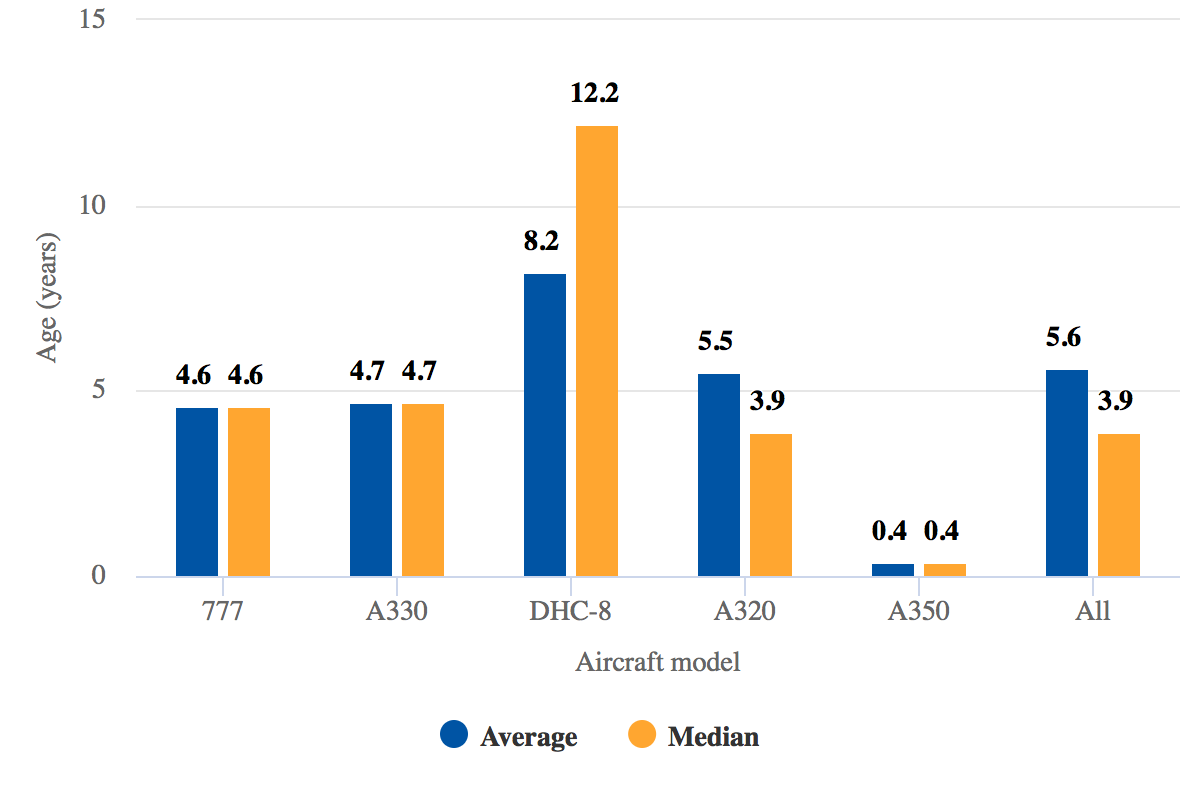 PAL’s average fleet age will be reduced further as the last three A350s are delivered, along with another 17 A321neos. PAL has taken delivery of four 168-seat A321neos over the past five months and is slated to take another two by the end of 2018.

The six 168-seat A321neos are all configured for long haul operations, with extra fuel tanks and 12 lie-flat business class seats. The remaining 15 A321neos, which will be delivered from 2019, will be used for short haul operations, featuring recliner seats in business and a higher-capacity economy cabin.

The long haul A321neos, along with the A350-900s, have enabled PAL to phase out its A340s. The first regular A321neo route was Manila-Brisbane, which was initially launched with A340-300s. PAL is also now deploying A321neos on some of its Manila-Sydney services, freeing up one of its A330-300s for other long haul routes.

PAL also uses A340s to the US and regionally

PAL also continued to operate A340-300s on some of its Los Angeles and San Francisco services until earlier this year, as well as on several short haul routes within Asia. PAL operated A340s to Honolulu until late 2014, when it began deploying A330-300s (initially the 363-seat two class aircraft and from Jun-2017 the new 309-seat three class configuration).

Although Vancouver was its last A340 flight, PAL has operated almost all its Vancouver services with 777-300ERs over the past several years. From Nov-2018 PAL will use the 777-300ER for all its services to Los Angeles, San Francisco, Toronto and Vancouver. The A350 will be used to upgrade New York, which is currently served via Vancouver using 777-300ERs, to nonstop in late Oct-2018.

PAL has already deployed the A350-900 on Manila-London, freeing up 777-300ERs for more North America services. Before the New York launch, PAL has also temporarily been using the A350 to operate selected services on several routes, including Bangkok, Los Angeles, Tokyo Haneda and Vancouver.

PAL’s new long haul fleet provides a step change in efficiency as well as significant product improvements, which are critical in its bid for a five-star rating. PAL’s A340s were inefficient and had outdated interiors, resulting in a competitive disadvantage in today’s environment of rising fuel prices and Asian airlines that are generally operating modern fleets.