Qatar Airways’ CEO Akbar Al Baker announced on 20-Dec-2010 that Qatar Airways is on track to declare “a very hefty profit” this year, clearing the way for an IPO. The CEO stated he is "pretty confident" the carrier will launch an IPO in early 2012, after achieving three consecutive years of profitability.

The CEO added that Qatar Airways achieved a net profit in 2009, although the carrier has not reported specific figures. The airline is on track to declare a net profit this year and Mr Al Baker is “hopeful of deriving a net profit in the next financial year as well”. Late in 2008, Mr Al Baker said that he had been hopeful of launching an IPO in 2010, but the impact of the global financial crisis had delayed the carrier from achieving its break-even target.

Just how profitable Qatar Airways actually is remains a mystery, as the carrier is simply not telling. Qatar Airways is 50% owed by the Qatari Government and 50% owned by private interests and does not disclose its accounts. Mr Al Baker stated that the carrier will “will disclose the exact figure only when we get listed”.

The scale of any IPO has not been made clear either. The percentage of the airline to be put on public offer and the timing will be decided by the owners, according to Mr Al Baker.

Profitability comes to the Middle East, for some

Qatar Airways joins a number of carriers that expect to report profits in the Middle East this year. IATA believes that airlines in the region will report a combined net profit of around USD700 million in 2010. This is expected to shrink to USD400 million in 2011.

However, industry profitability forecasts are something of a moving target, subject to the vagaries of costs – particularly fuel – and the strength of the international economy, notably the high yielding business and premium travel markets. Earlier this year, IATA forecast Middle East carriers would report a combined loss of USD400 million. 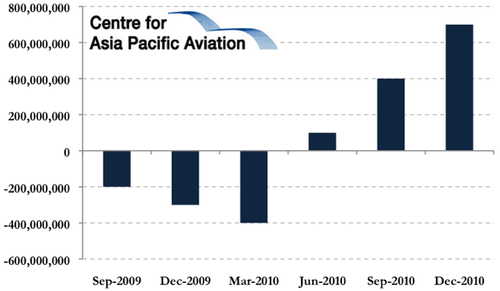 Emirates has already reported a USD964 million profit for the first half of its financial year, while Etihad Airways announced at the end of Nov-2010 that it expects an underlying profit in 2010, moving to full break-even in 2011 and consistent profitability from 2012 onwards. Air Arabia and Jazeera Airways both reported record quarterly results this year, after a difficult 2009.

Against this are continued losses by state-owned airlines such as Kuwait Airways, Saudi Arabian Airlines, Oman Air and Gulf Air. All these carriers are undergoing significant restructuring efforts. Gulf Air expects to report losses of around USD350 million this year, while Oman Air is expected to lose around USD150-160 million.

Haphazard progress towards IPOs in region

The possibility of a Qatar Airways IPO in 2012 underlines the trend towards more public ownership of airlines in the Middle East. Successful IPOs have been launch in the Middle East by Air Arabia, Royal Jordanian, Jazeera Airways and Wataniya Airlines in the past five years, but privately owned carriers remain significantly in the minority in the region.

The trend in the Middle East towards privatisation of state-owned carriers has seen mixed results, particularly given the uneven record of airline profitability in the region and the integration of airlines into national tourism strategies. The economic climate through most of 2008 and 2009 also battered some plans to take airlines private. Middle East Airlines (owned by the Lebanese Central Bank) was a clear victim of this, indefinitely postponing its local offering - scheduled for 2010 - due to “unfavourable market conditions”.

However, the increasing profitability of airlines and better investment market conditions seen in the second half of this year have rekindled some privatisation hopes. Emirates and Etihad have also dismissed any notion of an IPO in the immediate future, although Emirates has made it known that it will “always be ready” for an IPO, should the Dubai Government decide to do so.

Kuwait’s Government approved an IPO plan for Kuwait Airways Corporation in early 2008. A combination of the carrier’s poor results, the soft local market and Kuwaiti political interference have slowed progress to conduct a domestic IPO, which is now rolling ahead again. About 40% of the carrier will be offered to the public, while 35% will be sold off to "specialist foreign firms" and listed Kuwaiti companies, provided they are long-term investors. A 5% slice will go to employees, while the government will retain a 20% strategic minority shareholding. airline has appointed Ernst & Young and Citigroup to advise on a sale, with the legal transfer of the carrier to a new private shareholding company scheduled to be completed by Mar-2011.

Saudi Arabian Airlines is slowly corporatising its six business units, before conducting partial public sales. The carrier is due to conduct a 30% sale of its mainline operating business in 2011, although progress has not been forthcoming. A key Saudi Arabian advisory body recommended last year that the carrier be sold off via an IPO, instead of via the current step-by-step privatisation process.

Saudi-based LCC nasair is looking towards the possibility of an IPO as early as 2012 or 2013. The carrier, now Saudi Arabia’s sole LCC after the failure of Sama in Aug-2010, expects to move into profitability in 2011 and from there progress towards an IPO.

Gulf Air and Bahrain Air both plan to privatise as soon as possible, although the process is predicated on them being able to turn around their operations. Gulf Air hopes to report a break-even result by 2012, but Bahrain Air, which is now wholly owned by the Bahrain Government, expects another three to four years of losses as it reworks itself into a long-haul national carrier.

Qatar Airways backs the B787, but only up to a point

Mr Al Baker has an on-again, off-again relationship with Boeing’s much delayed B787. The aircraft is one of the pillars Qatar Airways plans to build its future long-haul fleet on, but the three-year plus wait is obviously testing the patience of management at the Qatari national carrier.

Qatar Airways has orders for 30 B787s and options for another 30. When the order was first signed, deliveries were originally scheduled to commence around mid-2010. Qatar Airways now expects to take delivery of its first B787 by the end of 2011, although Boeing’s latest problems could potentially delay this further. Since the in-flight fire on the ZA002 test aircraft in early Nov-2010 Boeing has grounded the B787 test fleet while it works on a fix.

In the aftermath of that incident, Mr Al Baker fired another salvo at Boeing, stating the company had “failed” on the B787 programme and he was “really taken aback” at the delays getting the aircraft into service.

Since then, his confidence in the programme has been restored. The CEO recently re-affirmed the Qatar Airway’s commitment to the B787 indicating that there are no plans to amend the carrier’s B787 order, as yet. However, he also warned that more delays to the B787 would leave “no alternative” but order cancellations. The CEO did not give any indications of just what sort of delays would trigger cancellations.

The comments prompted Boeing to respond that the carrier should do "what's best for its fleet". Qatar Airways has been one of Boeing’s strongest widebody customers in recent years, ordering 35 B777 passenger and freight aircraft after operating an all-Airbus fleet for more than a decade.

Boeing’s B787 order backlog has suffered over the past two years. From a peak of over 900 orders in late 2007, the order book has fallen to 846 aircraft. One option according to Mr Al Baker, is to switch to Airbus aircraft. Qatar Airways is already the largest customer for the A350 XWB, with 80 orders spread across all three variants of the aircraft. It will also be the launch customer for the type.

At the same time as Mr Al Baker fired his barbs at Boeing, he offered a gift to Airbus and the manufacturer’s own troubled A380 programme, confirming that Qatar Airways is considering increasing its orders for the A380.

Mr Al Baker has been an outspoken critic of the two-year delay that the A380 programme suffered. Qatar Airways has orders for five just five A380s, as well as another two options, but confirmed again this month that that it is considering orders for more. Qatar Airways is yet to choose an engine for the aircraft, which are not due for delivery until 2013.

Worried about the A350 XWB programme

Qatar Airways has cautioned that Airbus must be “vigilant” in avoiding delays on the A350 XWB programme. Mr Al Baker announced he does not expect the aircraft to be delayed significantly, although comments by Emirates President Tim Clark forecast delays of as much as a year for the new type.

The A350 XWB production manager, Gerald Weber, recently announced his retirement effective Mar-2011. Airbus will replace him with a new manager from outside the company. A few weeks earlier, Airbus confirmed that delivery of the first A350 XWB had slipped to around 2H2013.

Still hopeful on the CSeries

The carrier is also eager to renew its short- to medium-haul fleet with new aircraft. Bombardier and Qatar Airways have been in negotiations for some time regarding an order for the 100-150 seat CSeries. A firm order for 30, or more, aircraft has been hinted at, although negotiations have stalled on what Qatar Airways terms “commercial issues”, reportedly related to the capacity of the aircraft and the PW100G power-plant.

The launch of the A320neo in Dec-2010 is seen as a threat to Bombardier’s new aircraft. However, following the launch, Mr Al-Baker stated Qatar Airways remains committed to the CSeries regional aircraft.

Qatar Airways operates a fleet of 30 A320-family aircraft, and is clearly interested in the new aircraft, potentially as a launch customer, but “not for present orders” according to Mr Al Baker. Qatar Airways has another six A321s due for delivery.

Bombardier separately stated it is “continuing to discuss” the CSeries with Qatar Airways. An order for the CSeries would be a major win for the aircraft programme, which is struggling with just three customers and 90 firm orders.

Latin America and Europe to feature in expansion in 2010

Qatar Airways announced that the beginning of the month that it is "keen to expand in both Central and South America" and tap into the rising demand from Brazil, Chile and Argentina for international services. The three countries have a combined population of around 250 million. Qatar and Argentina recently signed an agreement to cooperate in areas ranging from the economy and trade to sports.

The carrier launched Doha-Sao Paulo-Buenos Aires service in Jun-2010, and has reported average load factors of above 85% on the route. The CEO added that the services have proved highly successful for the carrier, portraying Latin America as a “sleeping economic giant”. Qatar Airways plans to launch a direct Doha-Buenos Aires service next year.

The carrier also announced plans to reinforce capacity in Africa, adding frequencies to Nairobi and Dar Es Salaam from Jan-2011.

Set for the next decade

With the majority of its fleet strategy settled, the carrier can now fine tune its aircraft purchases and refine its network strategy. Whether it adds more A380s or A320s and purchases the CSeries matters very little in the broad sweep of the airline’s strategy.

Qatar Airways is set to add 30 aircraft and 30 routes to its network within the next three years. The carrier’s growth is aggressive, even by the standards of the Middle East. That it can continue to expand so quickly and still be profitable speaks strongly about the validity of the carrier’s long-haul model, its aggressive fleet strategy and the support that the Qatari Government has given the carrier.