A more positive picture for US airlines in Dec-2009, but times remain tough

2009 ended much better than it started for US airlines, with Dec-2009’s traffic results confirming some yield improvements, rising demand and load factors hovering around the 80% mark domestically. These improvements have been driven by careful capacity management and a slow pick up in air travel demand, reflecting the underlying economic recovery.

This article features in Peanuts! Weekly - the only publication exclusively focused on analysing global LCC strategy.

The lucrative business market, while improving, is yet to return to pre-crisis levels, putting further pressures on profitability and revenues as we enter 2010.

Capacity reduced by the majority in FY2009 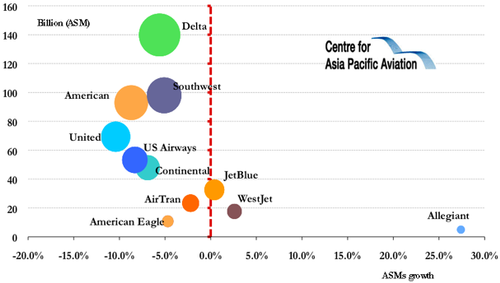 Among the smaller carriers, Allegiant, which has been robust throughout the global economic slowdown, stood out again. Allegiant’s expansionist strategy saw the carrier increase scheduled service capacity by over 27% in the full year.

Dec-2009 capacity: Increased by some but off a weak base

A number of US carriers are starting to come out of their shells. In Dec-2009, carriers like Continental and American Eagle were again reporting growth in capacity levels, although this came off a weak base in Dec-2008. 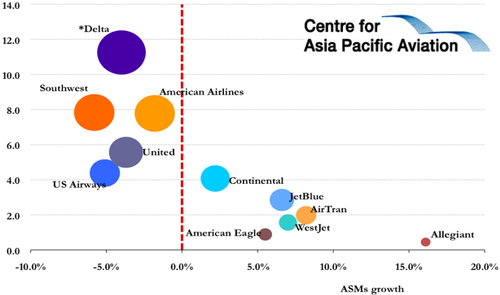 JetBlue’s traffic (RPMs) (and passenger) growth in Dec-2009 was the highest among the major carriers in the US domestic market, with the other US LCCs also increasing traffic in the month, indicating that it is the LCCs leading the US industry back to growth. 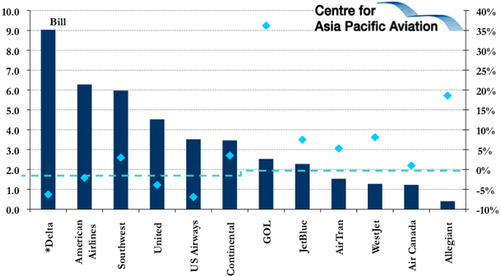 All but two of the nine US majors (with the exception of Delta and JetBlue) reported load factor improvements in the full year of 2009, reflecting continued capacity reductions and signs of a bottoming in demand. Delta and JetBlue reportedly marginals load factor reductions, slipping 0.1 ppts and 0.7 ppts, respectively.

Load factors among the major US airlines were strong in the year, in the 76% to 85% range.

The same load factor range was apparent in Dec-2009.

Southwest’s load factors remain the weakest in Dec-2009, but the most improved 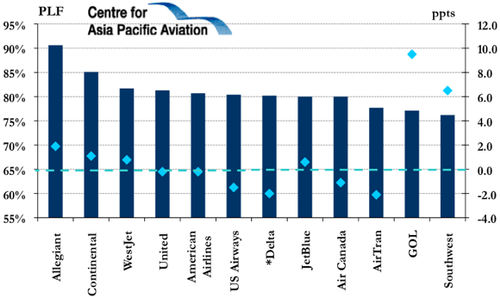 Another noticeable trend that has emerged is that America’s network airlines have pared back capacity so much that they are now consistently operating with similar or even higher load factors than their point-to-point LCC competitors. Accordingly, the US domestic industry has seen a 10-11% load factor increase for 2008 over 2001 levels. This is an extraordinary achievement. 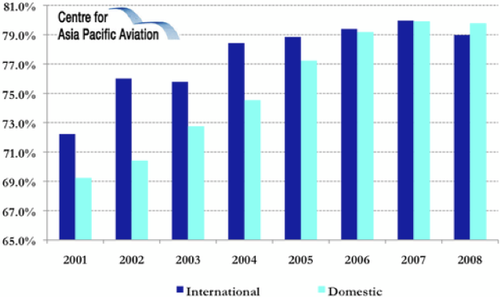 Unfavourable gap between average break even and actual load factors still exists, but reduced in 3Q2009

The Air Transport Association of America (ATA), in its quarterly Airline Cost Index for 3Q2009, revealed a 36% reduction in the cost index to 185.3, easily outpacing the 1.6% decline in the US Consumer Price Index (CPI). This helped reduce – “but not eliminate” – the unfavourable gap between average break-even and actual load factors, which fell from 6.2 ppts to 0.8 ppts.

The three largest components of the index – which includes all operating expenses as well as interest expense – were labour, fuel and transport-related costs, respectively.

ATA President, James C May, in Dec-2009, expressed optimism and caution about the outlook for 2010, commenting that passenger numbers among US carriers are “beginning to stabilise after several months of pronounced declines”, adding, “hopefully this is an indication that a gradual recovery is under way”.

Carriers are likely to cautiously increase capacity on a year-on-year basis in 2010, after the deepest capacity reductions since 1942 by US airlines last year.

Strict capacity management has meant that US airlines are operating at near record load factors, which is helping to push yields off the floor. Whether the positive trends can be maintained depends on the strength of the US economy, whose outlook is still uncertain.