IATA stated the political unrest in the Middle East and North Africa during February is estimated to have cut international traffic by about 1%. As such it is responsible almost entirely for the slippage in passenger demand growth, the industry body said. The more dramatic fall in cargo growth was the result in part of factory shutdowns due to the Chinese New Year period which fell in the first part of Feb-2011.

Outgoing IATA Director General and CEO, Giovanni Bisignani, said, “Another series of shocks is denting the industry’s recovery from the recession. As the unrest in Egypt and Tunisia spreads across the Middle East and North Africa, demand growth across the region is taking a step back. The tragic earthquake and its aftermath in Japan will most certainly see a further dampening of demand from March. The industry fundamentals are good. But extraordinary circumstances have made the first quarter of 2011 very difficult.”

Capacity increases ahead of demand are bringing down load factors for both passenger and cargo operations. 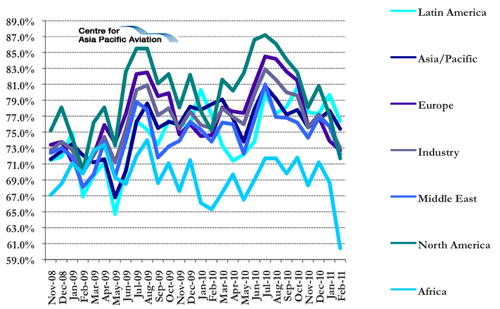 Mr Bisignani warned that while demand is still supported by “strong” economic fundamentals, looser supply and tougher demand conditions will make it challenging for airlines to recover the added costs of fuel. “Our pathetic 1.4% expected margin for 2011 is under considerable pressure,” said Bisignani.

Asia Pacific airlines reported a "major slowdown" to 3.0% growth, half of the 6.3% recorded for January. A capacity increase of 6.6% pushed the load factor down to 75.4%. Chinese New Year fell at the beginning of February, pushing some of the holiday traffic into late January.

Middle East airlines saw demand growth fall from 12.0% in January to 8.4% in February. A capacity increase of 11.0% resulted in a load factor of 72.2%. Political unrest in Bahrain, Yemen and Syria is expected to have an impact on the region’s markets in March. These three countries represent about 6% of Middle Eastern traffic and 0.3% of global capacity, according to IATA. 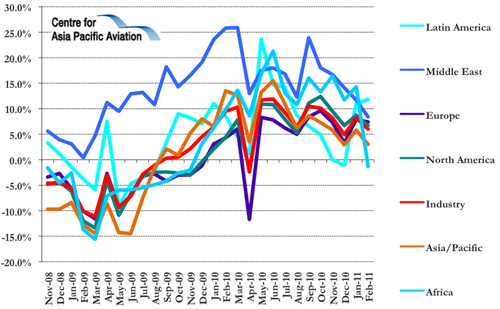 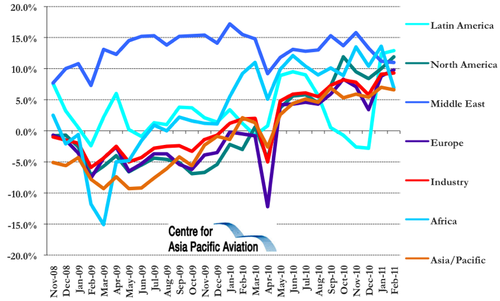