Boeing continues to take a beating on the delays to its B787 programme, with the company’s share price losing 3.5% yesterday, after analysts at Jefferies & Co cut their forecast for initial deliveries of the aircraft by three months and the outlook for 2010 production from 24 to 18 aircraft. After delaying the initial test flight in late Jun-2009, due to the need for small structural reinforcements on wing/fuselage connection points, the US manufacturer has seen its share price dip more than 15%. A revised test flight and a new delivery schedule for the aircraft is due to be announced in the next few weeks.

Airline reactions to another round of delays have been mixed, with launch customer All Nippon Airways expressing (with typical Japanese business reserve) its “disappointment” at the news and urging Boeing to clarify the delivery schedule. However, at the same time the carrier has showed its continued faith in the design, ordering another five aircraft earlier this week (upgrading from B767-300ERs to B787s and reportedly getting the aircraft at the same price).

With an industrial project the scale and complexity of a modern airliner, delays are inevitable, although two years is sorely pressing the patience of some carriers. Boeing’s major competitor, Airbus, has a track record that is little better in recent years. Its A380 was delayed more than two years and the A400M military transport, which has been passed on from parent EADS to Airbus Military, is four years late.

There is no denying that the combination of the global recession and the B787 delays have hurt Boeing, much worse than similar delays to the A380 hurt Airbus, but it is increasingly clear that the move to make the carbon and composite twin jet was the right one, despite the pain Boeing is feeling now. Boeing has lost 73 firm orders for the 787 in the first six months of this year (including 15 from Qantas last week), adding to several cancellations last year. This compares to the 20 orders that Airbus lost for the A380 (all when it indefinitely delayed the freighter version).

However, Boeing still has around 850 firm orders for the 787, before the aircraft has even left the ground. Airbus’ competitor, the A350 XWB (which was relaunched in late 2006, after an eighteen month delay when airlines failed to be enticed by the original A350 design), has racked up a further 490. Together these two aircraft will increasingly form the backbone of the world’s long-haul fleet over the next 20 years, with total orders now standing at more than 1,300 with deliveries stretching well past 2020.

By comparison, the A380 has a total of 200 orders (and about 50 options). Delays and cost blow-outs to the programme have pushed the break-even order point for the aircraft out to 420 aircraft. So, while the Airbus giant is in production and flying, its future is less rosy than that of its smaller relatives.

Steven Udvar-Hazy, the CEO of the world’s largest aircraft lessor, ILFC, noted in June that there had been a general structural change in the industry and in the way that airlines think about the A380 - ie airlines are no longer viewing them as premium machines now that Business travel demand has slumped. He also questioned Airbus’ ability to wring any money from the programme, given the cuts to production. Boeing's nearest competitor, the B747-8, meanwhile has just 105 orders, three quarters of them for the freighter version. 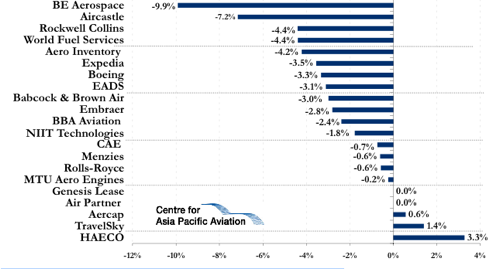