787 network analysis: 20% of Dreamliner routes are new, others replace aircraft on existing routes

Boeing's 787 Dreamliner was billed as a "hub-buster", an aircraft that would open new routes and allow passengers to fly non-stop in thinner markets rather than transfer via a hub. With the 787 approaching three years of service, how have airlines used the aircraft? Looking at routes planned for the northern winter 2014/2015 schedule, 17% of 787 routes have been launched with the Dreamliner. The remaining 83% have had the 787 replace or supplement an existing aircraft.

The 787 has had a difficult entry into service, with airlines intending to launch routes with the 787 but having to use other aircraft types as an interim measure. If we include such known examples of routes launched with an interim aircraft and later switched – often mere days or weeks later – to the 787, the share of 787 routes opened with the Dreamliner increases to 20%.

787 Dreamliner is due to open 34 new routes; China offers opportunities

The 787 is due to serve 34 routes in northern winter 2014/2015 that have not previously (in recent years) been served by any other aircraft, showing the aircraft's potential to open new city pairs. This does not mean some of the routes could have been opened with other aircraft, although indications are airlines are finding the 787's lower cost (and smaller capacity) conducive to routes that could not have previously been served.

United VP network Brian Znotins told Forbes of the carrier's use of the 787-8 to open a San Francisco-Chengdu service: "This route is enabled by this airplane." The 787 will be instrumental in further expansion, Mr Znotins added. "We’re looking deep into China, looking at what the next best destination in China is...China is full of cities of 6 to 10 million people. With this airplane, we can be a first mover." United MD Greater China & Korea Walter Dias had a short but sweet view of the Chengdu service: “We couldn’t do the flight without the 787.”

Norwegian Air Shuttle is one of a few airlines with an exclusive 787 long-haul fleet or moving to a 787-only long-haul fleet. CEO Bjorn Kjos told Travel Weekly about its long-haul flights: “We looked at this previously but couldn’t do it without a Boeing 787."

A number of routes were due to be opened by the 787 but had to be inaugurated by other aircraft due to delivery or performance delays, with the 787 eventually taking over. If these flights are included, the number of routes the 787 has opened (immediately or with a brief delay) is 41, representing 20% of the 787's network.

This listing excludes Etihad's planned Abu Dhabi-Brisbane 787-9 service due to commence in Jun-2015, after the winter 2014/2015 schedule, the period used for this study.

Of the 34 routes the 787 immediately opened, nine are with Norwegian. A further five routes were due to be opened by the 787 but had to be launched with alternative aircraft. These five routes in addition to the nine opened with the 787 means Norwegian opened 14 of the 41 new (or with delay) routes – accounting for over one third of them.

Norwegian's initial 787 network from Scandinavia to Bangkok, Fort Lauderdale and New York JFK is being expanded to additional US destinations as well as services operating from London Gatwick. Norwegian awaits the US DoT's ruling on its request to serve US routes with an Irish AOC. As CAPA previously wrote:

Opponents of Norwegian Air Shuttle’s efforts to expand its low-cost long-haul operations between the EU and US claim the carrier is violating labour stipulations included in the second phase of the EU-US Open Skies agreement that took effect in 2010. Mr Walsh argued that regulations designed to increase liberalisation are being used to block efforts by Norwegian, and a “strong and powerful” argument is mounting against the carrier and CEO Bjorn Kjos. “Regulators should hang their heads in shame,” remarked Mr Walsh. He is pleased to “see Bjorn be more ambitious than anyone else”.

Norwegian dismisses any arguments that its plans to base Norwegian Air Shuttle in Ireland with some crews sourced from Asia violates any regulatory framework. Mr Kjos remarked that many airlines come from “parts of the world” that are too small for growth, citing the 700,000 passenger catchment area of Oslo as an example. “The choice is should you go into other areas and create jobs...or should you try to give it away to the Asians or others”.

Mr Kjos countered that opening up competition creates a large volume of jobs in both the aviation and tourism industry, particularly hotels and restaurants. By lifting protectionist barriers, jobs are created not only for pilots and flight attendants, but also “where you really need them” in hotels and restaurants.

All Nippon Airways is the airline that has opened the second largest number of new routes with the 787. ANA has opened five, although some are not entirely new: ANA served Frankfurt, Jakarta and Munich from Tokyo Narita with other aircraft prior to opening a 787 service from Haneda. However, ANA's Dusseldorf and San Jose services were entirely new destinations in ANA's network and were planned around the 787's capabilities.

Air India, not always seen as an innovative carrier, ties with UK's Thomson in third place for number of new routes opened by the 787. Each has opened four. Three of Air India's new 787 routes are in Europe (Birmingham, Milan/Rome served jointly and finally Moscow). Air India's fourth route is in Australia, where Melbourne and Sydney are served jointly.

Air India has announced its entire European and Asia-Pacific network will be served by 787s; 777s will remain on North American routes. Air India commences Moscow on 18-Jul-2014 while the Milan/Rome service is about a month old. The Birmingham and other European routes are showing encouraging signs now that the 787 is being used; Frankfurt, London and Paris have significantly improved since the 787 was deployed. However, Air India's Melbourne/Sydney service is under-performing, with Air India not receiving the premium yields necessary.

Thomson's four entirely new scheduled routes (as filed in OAG) cover three destinations – Mauritius, Phuket and Puerto Vallarta – all leisure, fitting with the carrier's leisure nature. They are low frequency, however, with approximately one weekly flight in northern winter 2014/2015.

Japan Airlines has used its 787s to open service to Boston, Helsinki and San Diego – entirely new destinations in its network. Boston and San Diego are part of JAL's strategy to reach thinner markets that passengers previously reached via connecting itineraries – or, in the case of San Diego, used an alternative airport (Los Angeles International). JAL serves Helsinki as part of a partnership with Finnair.

Local Japan-Finland traffic is limited but JAL can use Finnair's European network to reach new destinations as well as offer faster connections than through its further inland European partners British Airways and Air France (the latter not a member in JAL's oneworld but which still has close connections). ANA has used its 787 to open a new North American route (San Jose). ANA is considering mirroring JAL's Helsinki/Finnair strategy by flying to Istanbul (likely with the 787) for connections on Turkish Airlines.

United, another carrier usually not thought of as being innovative, has also opened three new routes with its 787: Denver-Tokyo Narita, San Francisco-Chengdu and, from Oct-2014, Los Angeles-Melbourne, which will become the longest scheduled 787 route. Tokyo Narita is a well-established United destination while Chengdu is new and Melbourne has not been served non-stop in recent times, having been routed via Sydney.

The 787-9 was instrumental in United choosing to serve Melbourne non-stop, United MD Japan and Pacific sales Matt Miller told Travel Weekly: "The 787-9 has got the right range, capacity and has the best economies of any wide bodied aircraft we are flying today. We need a plane like it to serve a market like Melbourne to LA. It gives us the ability to add a third trans-Pacific flight but not flood the market with seats. We are all about capacity discipline."

Asia-Pacific is the largest destination for remaining 787s on order, with the region due to receive 232 more of the type. 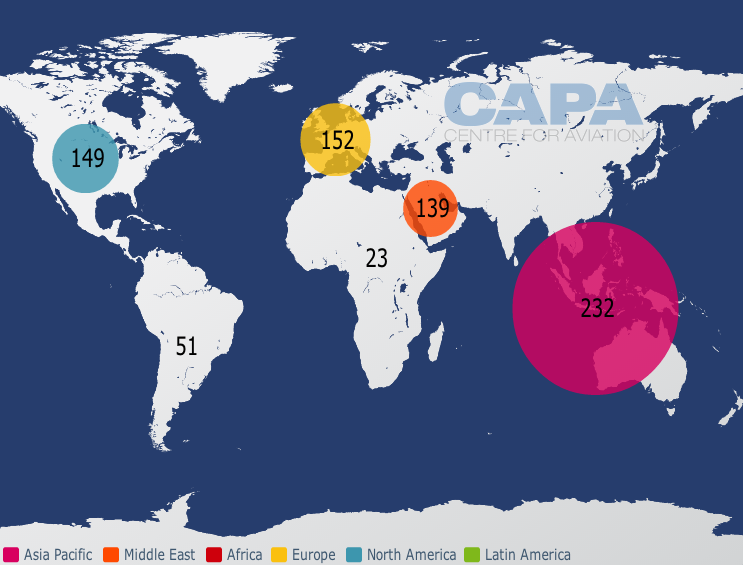 Ethiopian has opened two routes: Lome-Sao Paulo (originating in Addis Ababa, although Ethiopian served Addis Ababa-Lome prior to the 787) and Addis Ababa-Shanghai Pudong.

Qatar has opened two destinations, Tokyo Haneda and Edinburgh. However, Qatar already served Tokyo Narita with A330s. Etihad will follow Qatar into Edinburgh, but will launch its Abu Dhabi-Edinburgh service with A330s.

British Airways and Hainan Airlines each open one new route

Finally, British Airways and Hainan Airlines have each opened one new route with 787s: Austin for BA and Boston for Hainan. BA opened Chengdu with a 777-200 and later switched to the 787, but is not known to have publicly cited any 787 delay forcing it to use the 777 first. BA is using its 787 on existing routes (such as Calgary and Newark) and plans to send the type to India as well as open more destinations in China.

Hainan Airlines is switching to an all-787 North American network. Hainan may next launch New York service with the 787, and expects to order more 787s.

Of the 24 airlines that will fly the 787 in northern winter 2014/2015, only 10 will do so on entirely new routes. Of the airlines not opening new routes, some like Air New Zealand expect to do so gradually over time, reflecting the cost and risk of launching new routes in what is still for many airlines a world with tepid growth. Royal Jordanian for one is cutting back on growth plans and expects to use its 787s only to replace A330s and A340s, resulting in the carrier likely cancelling four of its 787s.

Australia's Jetstar is also becoming more conservative on long-haul growth. This contrasts to Asian LCCs like Scoot, which expect the 787 to open new destinations as well as finally bring some existing destinations to profitability. Scoot has not yet announced a 787 deployment schedule. As noted earlier, Etihad will open a new 787 service, Abu Dhabi-Brisbane (currently served via Singapore with A330s) but not until after northern winter 2014/2015.

For a single aircraft type – in what is still an early deployment stage – to have new routes account for 20% of its operation is a solid turnout. Undoubtedly there will be additions (Etihad and Scoot already plan as much), but new routes cannot be the sole determinant of the aircraft type's success.

Fleet replacement is always a large part of new aircraft deliveries, so it is scarcely unusual that a high proportion of the 787s would be simply replacement aircraft.

Some airlines would have to give up routes currently operated by existing aircraft if they did not have a new, more efficient type coming online. The forthcoming entry into service of the A350 will give the opportunity for more new routes, but also replacement of existing services. Aviation is constantly replenishing itself, and with competition increasing, becoming more efficient is a matter of survival.