For an industry operating on thin margins, it is highly sensitive to demand shocks such as that witnessed amid the global financial crisis. Certainly, carriers in Europe, North America and the Asia Pacific suffered from incredibly tough conditions, but the Middle East powered on in 2009.

Full-year 2009 demand statistics for international scheduled air traffic showed the industry ended 2009 with the largest ever post-war decline. Passenger demand for the full year was down 3.5% with an average load factor of 75.6%. Freight showed a full-year decline of 10.1% (in terms of FTKs), with an average load factor of just 49.1%, according to IATA.

But there were some encouraging signs as the year came to a close. Dec-2009 passenger demand recorded a 4.5% improvement compared to December 2008, with a load factor of 77.6%. While this is an 8.4% demand improvement from the February 2009 low point, it is still 3.4% below the early 2008 peak, according to IATA.

Middle Eastern carriers reported an 11.2% increase in RPKs in 2009 (on a 13.6% capacity increase) and generated the fastest growth in passenger traffic at the end of the year with a stirring 19.1% increase in Dec-2009. 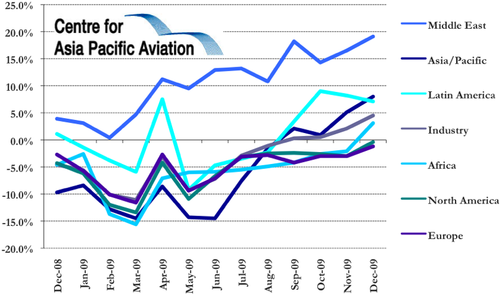 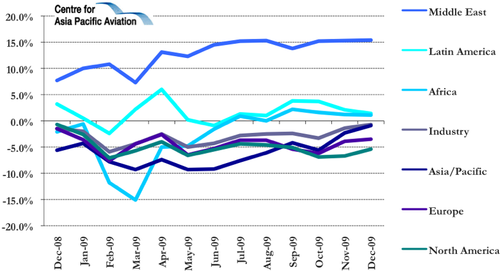 The Middle East was the only structural shift referred to by IATA in its latest commentary. It did not mention the considerable impact LCCs (which are not members of IATA) are having in short-haul markets around the world, though previous IATA releases have discussed their impact on premium demand in Europe.

IATA members’ international traffic fell 3.5% last year, but ICAO (whose data includes scheduled passenger traffic on airlines of Member States, including LCCs) last month reported a preliminary worldwide international decline of 3.9% in 2009. Total (international and domestic volumes) fell 3.5%, according to ICAO, as the domestic decline (-1.8%) was less severe. Indeed, there was a double-digit domestic passenger traffic increase in the emerging markets of Asia and Latin America.

ICAO noted that this domestic performance, and the “relative strong performance of LCCs in North America, Europe and Asia Pacific, helped curtail the severity of the decline in total traffic”.

IATA members in the Asia Pacific region, Europe and North America recorded year-on-year declines in passenger demand of 5.6%, 5.0% and 5.6%, respectively, in 2009.

Asia Pacific carriers however are benefiting most from the year-end upturn, according to IATA, with an 8.0% year-on-year improvement in December. This reflects their 35% contribution to the year-end rise boosted by the significant economic upturn in the region.

Latin American carriers recorded 7.1% growth in December. Full-year traffic growth was constrained to 0.3% due to the impact of Influenza A(H1N1) fears during the second and third quarters.

Africa’s carriers experienced a sharp decline of 6.8% in 2009 primarily on an "exceptionally weak first half". Their year ended with December demand at 3.1% above previous year levels. 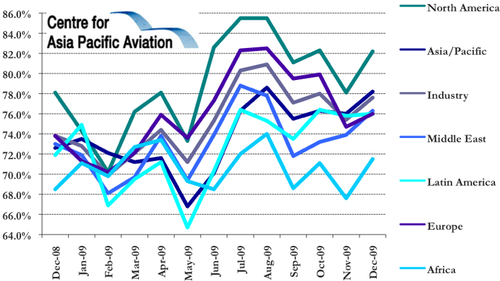 Dec-2009 freight demand showed a 24.4% year-on-year increase, with a load factor of 54.1%, although the improvement is “exaggerated by the exceptionally weak performance in Dec-2008, which was the low point on the cycle”, according to the industry body.

Freight demand is still 9% lower than the peak in early 2008. Optimism is returning to the industry as purchasing managers survey indicators reached a 44-month high in December pointing towards increased freight volumes in the coming months. 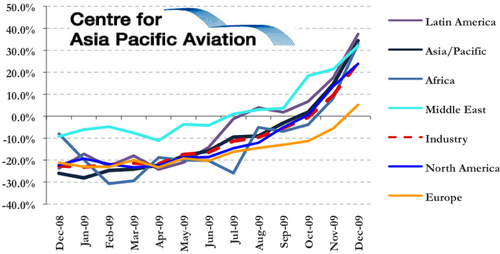 ICAO is quite upbeat in its traffic outlook. It noted, “in line with the improving economic situation in many parts of the world, a moderate recovery is expected for 2010 with a 3.3% traffic growth forecast” worldwide. ICAO added, “the momentum is expected to continue in 2011, on the way to full recovery and traditional growth trends of 5.5% per year”.

Profitability however is a different story. Yields have started to improve with tighter supply-demand conditions in recent months, according to IATA, but they remained 5-10% down on 2008 levels.

Mr Bisignani concluded, “revenue improvements will be at a much slower pace than the demand growth that we are starting to see. Profitability will be even slower to recover and airlines will lose an expected USD5.6 billion in 2010…The worst is behind us, but it is not time to celebrate”.