The company stated 1time performed well last year, growing revenue to ZAR1,040 million on marginally lower yields and a 12% passenger increase, to 1.8 million. The passenger growth was achieved despite the overall domestic travel market declining by an estimated 7% for the year, leading to further market share gains for the airline.

1time Holdings expects further revenue growth for the carrier on expanded capacity and higher passenger volumes for 2010. There is uncertainty surrounding the impact the FIFA World Cup will have on earnings for the year. Margins at the airline will be largely dependent on the average Rand fuel price achieved for 2010. Hedging is, however, considered and assessed on an ongoing basis.

In the Middle East, Air Arabia (-0.2%) slipped. The carrier received an Air Operator's Certificate (AOC) from the Egyptian Civil Aviation Authority, clearing the way for the imminent launch of JV, Air Arabia Egypt in Jun-2010. Jazeera Airways (-1.2%) was also down, as the Kuwait Stock Exchange (-0.1%) slipped. 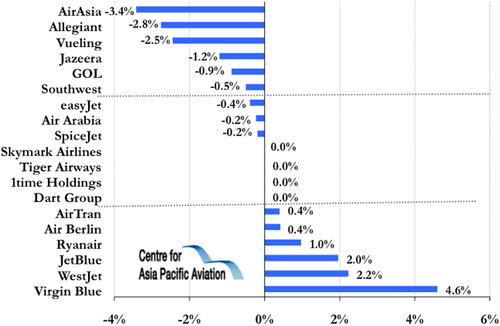 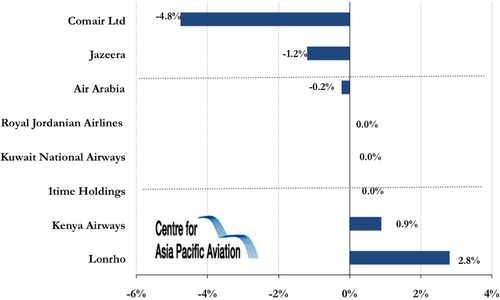