The likely profit outlook for 2018: Margins high, but below peak, as traffic growth slows & oil price rises. World economic growth was above the long term trend in 2017 for the first time since 2010 and is expected to remain so in 2018. This is good news for air travel demand, although rising oil prices may dampen traffic growth, relative to the past couple of years.
The latest biannual update of the CAPA world airline industry operating margin model increased its estimate for 2017 and the forecast for 2018, while adding a 2019 forecast. Although 2016 may have been a cyclical margin peak, the industry is enjoying a more sustained period comfortably in excess of previous high margins.
The fundamental reason for improved airline industry profitability relative to previous cycles is better capacity utilisation. If maintained, capacity discipline should also help to smooth out the cyclical volatility in airline margins. Nevertheless, it was the fall in oil prices from mid-2014 that gave the extra push to take margins to new levels.
Oil prices affect costs, fares and decisions about aircraft retirements and new orders. The price of crude, together with world economic growth and geopolitical events, is a key risk to the industry’s new levels of profitability.

Increased GDP forecasts should keep traffic (RPK) growth above the long term trend
International Monetary Fund GDP growth forecasts for 2018 and 2019, which are the starting point for CAPA’s RPK growth forecasts, are each 0.2ppt higher than the forecasts used in the Jul-2017 CAPA update.
The IMF’s Jan-2018 economic outlook estimated that world GDP growth (at constant prices and at market exchange rates) reached 3.2% – fractionally above the long term historical trend of 3.1% for the first time since 2010.

The fund described the cyclical upswing under way since mid-2016 as “the broadest synchronised global growth upsurge since 2010”, with 120 countries enjoying increased GDP growth in 2017.
It forecast growth of 3.3% in 2018, before easing back to 3.2% in 2019. This would be the first time since 2004-2007 that world GDP growth would exceed the historical trend for three successive years.
In spite of the steady and fairly healthy GDP growth outlook, CAPA’s RPK growth forecasts ease back from 7.7% in 2017 to 7.0% in 2018 and 6.4% in 2019. Through lower fares, the fall in oil prices since 2014 stimulated RPK growth to rates in a range of 2.4 to 3.0 times GDP growth between 2015 and 2017.
However, this effect should dissipate as oil prices climb (or, at least, do not fall further) and the multiplier between RPK growth and GDP growth should return towards 2.0 times (as it was in 2015-2017).
Nevertheless, RPK growth looks set to remain at, or above, the long term trend of 6.2% throughout the forecast period. Moreover, the model predicts at least five consecutive years of RPK growth above the trend (2015-2019) – for the first time since 1984 to 1988.
Fleet growth remains at the highest rates since the early 2000s
The rate of growth in the commercial airline jet aircraft fleet has been on an upward trend since falling to 2.6% in 2011, driven both by increased deliveries and falling retirements (as a result of lower oil prices).
Fleet growth rose from 3.9% in 2016 to an estimated 4.6% in 2017, which was the first time it had been higher than 4% since reaching 5.6% in 2001. Although it is expected to fall in each of the subsequent years of the CAPA model, it remains above 4% (a forecast of 4.3% in 2018 and 4.1% in 2019). 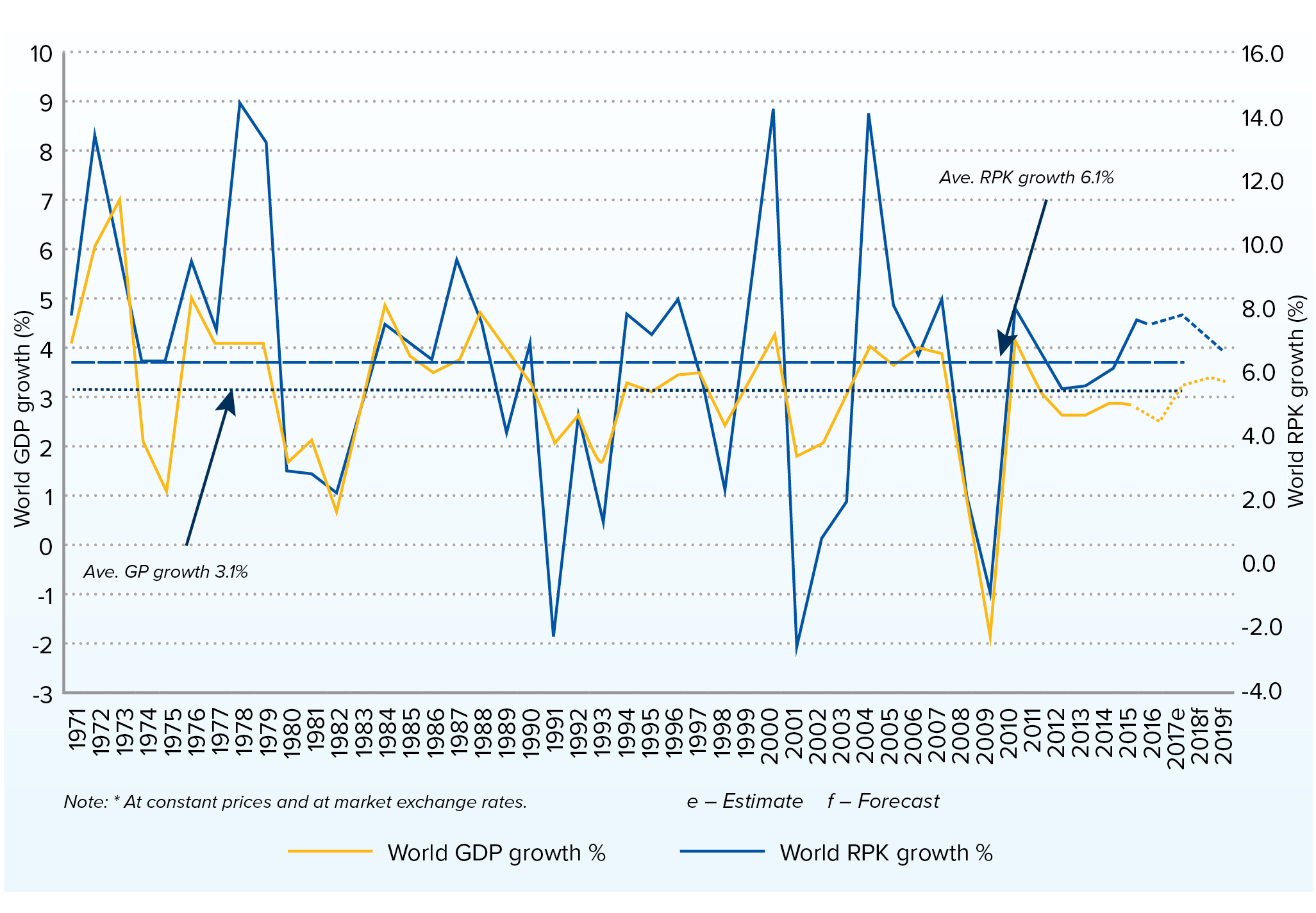 The new forecast would mean that fleet growth in the period 2016-2019 will be higher than in any year since 2001 (when it was 5.6%). As flagged in the Jul-2017 update, this suggests a slight loosening of the airline industry’s improved capacity discipline (although fleet growth is still in some way short of previous peak growth rates of more than 7%, and remains less than traffic growth rates).
Future retirement levels are the biggest source of uncertainty in the fleet growth forecasts. Oil price increases could trigger an increase in the number of older, less fuel efficient aircraft retired, but this may depend on the pace and extent of the increase.
Oil prices are rising, which leads to declining margins
Increases in oil prices help to explain the decline in airline margins in the CAPA model in 2017, 2018 and 2019, from the 2016 peak.
The model uses Brent crude oil price forecasts from the most recent monthly consensus poll published by Reuters (published on 31-Jan-2018).

World airline industry deliveries and retirements as a % of fleet* and growth in fleet: 1971 to 2019f 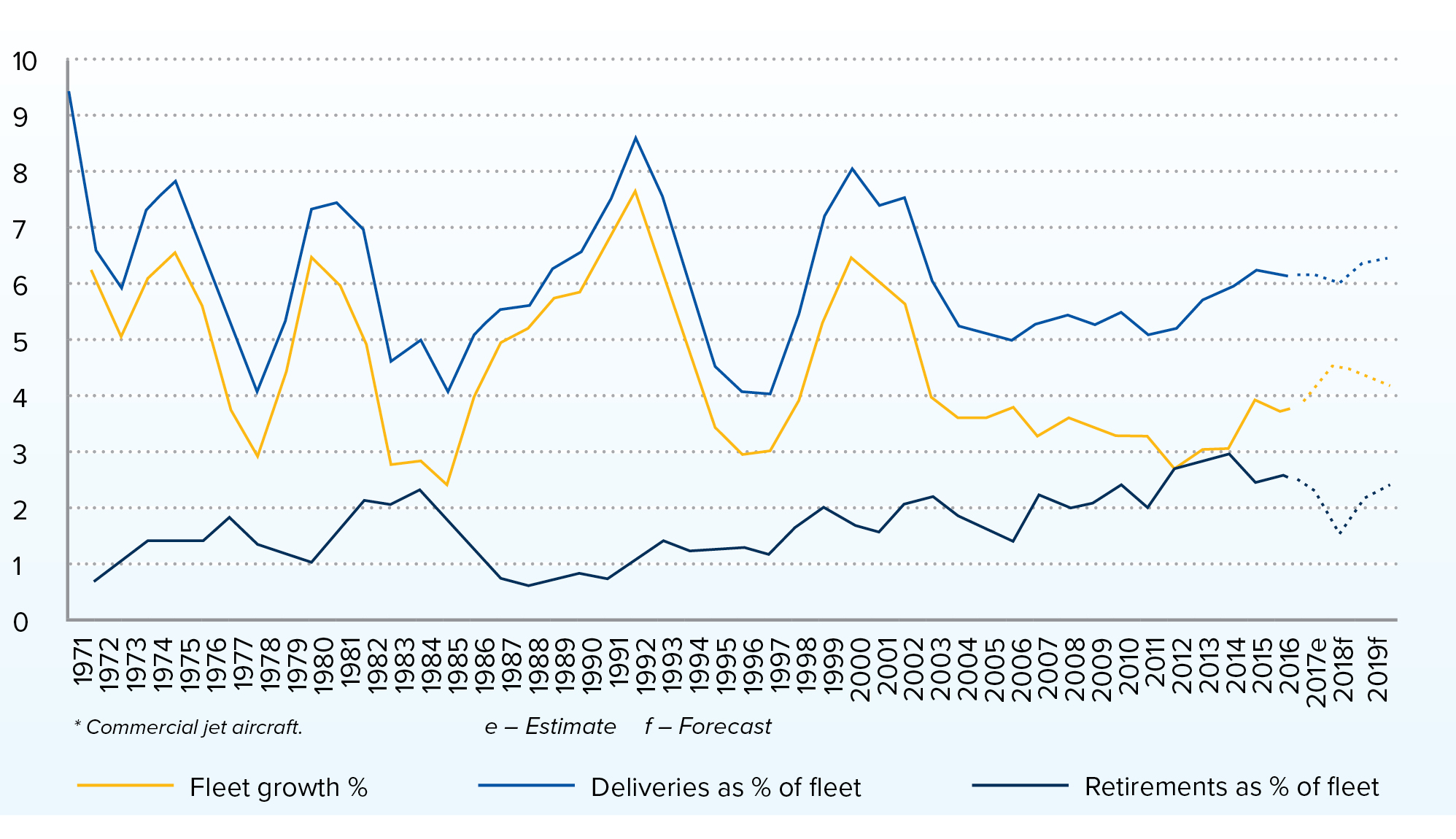 This gave an average Brent price forecast of USD62.37 per barrel in 2018 and USD61.29 in 2019. These figures compare with USD54.2 in 2017 after USD43.6 in 2016, indicating that prices are expected to continue to rise.
Brent prices hovered around USD69 to USD70 for much of Jan-2018, descending to the mid-USD60s in Feb-2018, so the Reuters consensus may well be exceeded.
Nevertheless, at the moment there are very few forecasters predicting a return to the USD100+ prices of 2011 to 2014.
Oil prices affect airline profit margins through fuel costs, although the relationship is complicated by fuel hedging and the extent to which changes in fuel costs are reflected in changes in ticket prices. 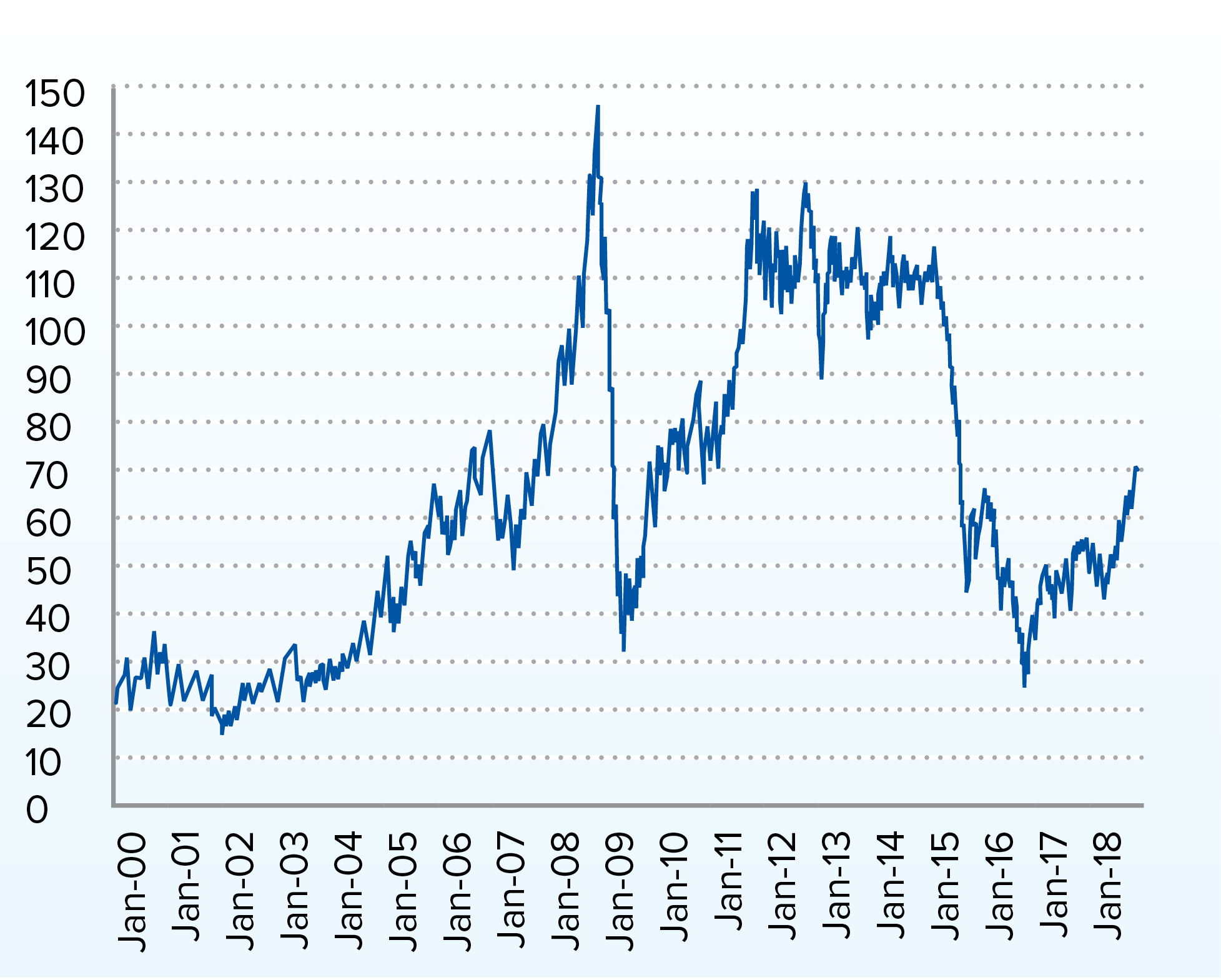 Source: CAPA – Centre for Aviation, US Department of Energy.

Over the past decade, there has been a clear inverse relationship between airline operating margins and fuel cost as a percentage of revenue.
The world airline industry is in the middle of an unprecedented period of high margins
The CAPA world airline operating margin model continues to indicate that 2016’s operating margin was a cyclical peak at a new high level of 9.2%, but that the industry’s profitability is now following a modestly declining trend.
Previous cyclical peaks almost never exceeded a margin of 6% and were typically followed by a rapid decline. By contrast, if CAPA’s forecasts are borne out, the current cycle will enjoy at least five consecutive years to 2019 of margins at comfortably more than 6%.

Airline fuel cost as a percentage of revenue and airline operating margin: 1979-2017e

The operating margin forecasts in this update confirm the unprecedented nature of current world airline industry profitability, in no small measure thanks to lower oil prices, and significantly assisted by better capacity discipline than in previous cycles.
Nevertheless, the model supports CAPA’s analysis of 28-Dec-2017 that the industry has almost certainly passed the sweet spot enjoyed in 2017.
Changes to the CAPA model compared with the Jul-2017 update
The key inputs to the CAPA world airline operating margin model are world GDP growth (which drives demand), growth in the global fleet of commercial jet aircraft (which represents supply) and Brent crude oil prices. The outputs are world RPK growth and operating margin.
This revision of the model updates and replaces the last forecast published in Jul-2017.
The main differences between Jul-2017 forecast CAPA’s Jan-2018 model and the are as follows: