Xiamen Airlines, China's sixth largest carrier and the world's 27th largest by available seat kilometres, is gearing up for more forays into the international market. Xiamen is predominately a domestic carrier with only 5.7% of available seats allocated to international services. Xiamen in May-2011 ordered six Boeing 787s for services to Europe and North America after their 2014/15 delivery dates. But international expansion, albeit medium-haul and not long-haul, can commence earlier with the carrier retrofitting its 757s with a three-class configuration, including having lie-flat beds in first class.

Xiamen's fleet of six 757-200s operate in a two-class configuration primarily on domestic trunk routes (such as to Beijing) but are being retrofitted to a three-class configuration, including lie-flat beds in first class. Such a premium configuration for the domestic market is uncommon in China. Only two of the 757s have so far been retrofitted, and while Xiamen has not announced its strategy for the retrofitted aircraft, which are the largest in its fleet and have the longest range, they could be used to open international services before the 787 arrives. The fleet would largely be confined to regional Asia and not facilitate opening its planned routes to Europe or North America, or even possibly Australia.

Amongst its peers, Xiamen Airlines has the second-least proportion of international capacity, just ahead of Sichuan Airlines. Sichuan plans to this year deploy A330s to Europe, North America and possibly Australia.

Xiamen Airlines has reported 24 consecutive years of profits, but like other carriers, is increasingly turning to international markets. The opportunities – higher margins and prestige for the airline and country – are accompanied by a necessity: the previously core domestic Chinese air travel market is being eaten away by China's rapidly expanding high-speed rail network.

Xiamen Airlines, however, does not come off lightly. At the carrier's home base of Xiamen Airport, where it accounts for 43.9% of all domestic capacity, one-third of all domestic services risk being threatened by high-speed rail over the next few years. 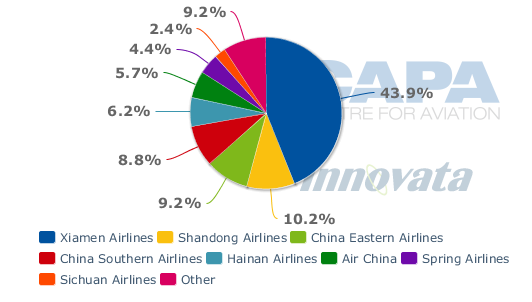 The introduction into Xiamen's 757s of lie-flat beds, a relatively new occurrence in mainland China, also reflects how Chinese carriers are improving their product. The causes are multiple. While growth in China will be large, competition will increase; service and product can be a point of differentiation. Targeting international markets and their passengers requires a more internationally competitive product.

Xiamen's rise – it wants to be the 20th largest carrier by the end of the 12th Five Year plan, ending in 2015 – is being accompanied by membership in the SkyTeam alliance as well as fleet growth from the current 78 to 136 by 2015. (Xiamen only has 36 aircraft on order, suggesting an order in the short-term is likely.) With its fleet, Xiamen hopes to carry 30 million passengers annually by 2015, up from a 16.4 million in 2011. Also remaining to play out is how Xiamen will complement the international expansion of 60% owner China Southern Airlines.