Privately-owned carrier Xiamen Airlines has regained its position as China's fourth largest airline after a drop in capacity in 2H2012 and early 2013 when measured on available domestic and seat capacity and frequency. This places Xiamen as the world's 27th largest airline by seat capacity – larger than perhaps better-known carriers including KLM, Korean Air and Cathay Pacific. While those carriers eclipse Xiamen when weighing available seat kilometres, Xiamen as the 51st largest on ASKs is still larger than Air New Zealand, Finnair or Vueling.

This strong domestic carrier – 94% of seat capacity is within mainland China – will accelerate growth of its small international footprint by adding services around Southeast Asia following its ascension to SkyTeam in late 2012. But the domestic Chinese market remains its focus, and Xiamen will use many of the 15 737-800s it is receiving this year to grow its presence around its namesake home of Xiamen. Despite the name connection, Xiamen Airlines has more capacity outside of Xiamen than it does to or from the city. In 2013 Xiamen Airlines aims to break the 20 million threshold for annual passengers carrier, and also carry over 200,000 tons of cargo and mail.

While Xiamen Airlines has regained its position from privately-owned Hainan Airlines as China's fourth largest airline, further movement up in the rankings could be difficult: while Xiamen will capture 7.5% of domestic capacity, the third largest domestic airline, Air China, will have nearly twice the capacity at 13.2%.

China Eastern as the second largest will have 18.6% and the largest, China Southern, 22.1%. 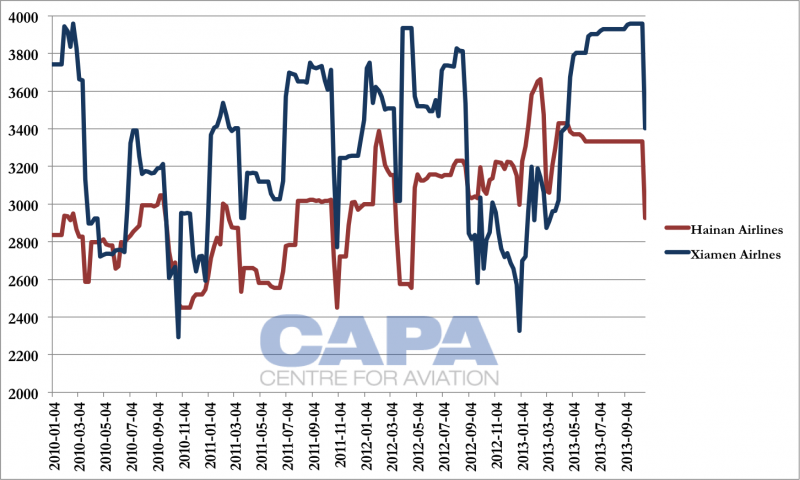 Hainan, like the so-called Big Three, operates a portfolio strategy with different AOCs under itself or part-owner HNA Group. Taking into account these domestic subsidiaries (and not Hong Kong Airlines and Hong Kong Express), HNA Group is slightly larger than Xiamen, with a 7.8% share of the market. This will grow as Hainan plans to launch three new domestic carriers, but Xiamen also plans to grow. What strategic benefit Hainan could have from bragging rights about size is not clear: its subsidiaries are separately branded ventures with little public recognition that they are part of one group, the way SilkAir is with Singapore Airlines or Dragonair with Cathay Pacific.

It is possible Hainan could not have a large presence in the cities it plans to serve without local support that favours a hometown carrier, but there are opportunities for Hainan to present a more united front. This may develop as it launches more high-profile subsidiaries. 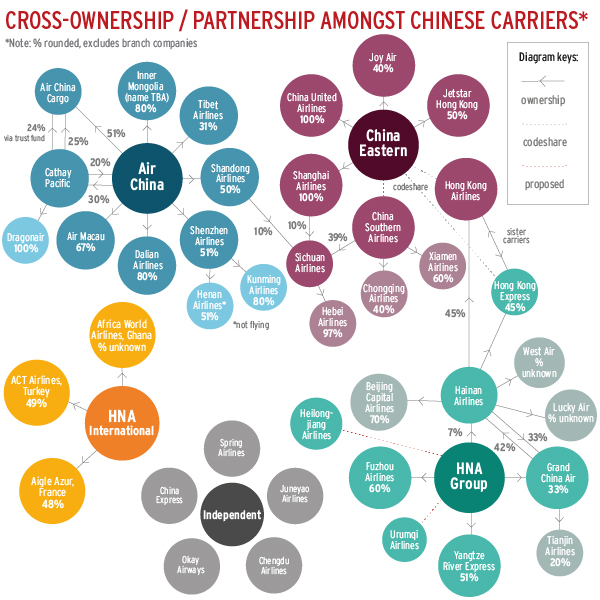 While Xiamen Airlines has no airline subsidiaries of its own, it is majority-owned by China Southern. China Southern – Asia's largest airline – is already far larger than the HNA Group, and adding Xiamen's capacity to the group would only further propel it higher than HNA.

Source: CAPA – Centre for Aviation
Note: Xiamen announced in 2012 a commitment for 40 737-800s. This awaits government approval. Xiamen also plans to take six 787-8s but not directly via Boeing. 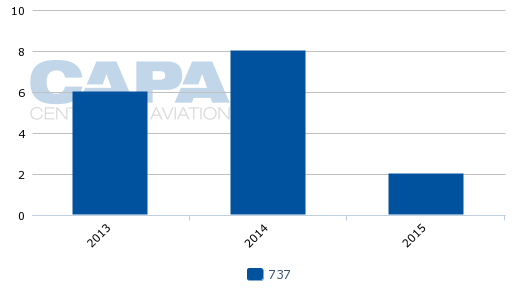 Source: CAPA – Centre for Aviation
* Excludes new aircraft that are coming from leasing companies
Aircraft operated by subsidiaries/associates of the main carrier may be listed separately. 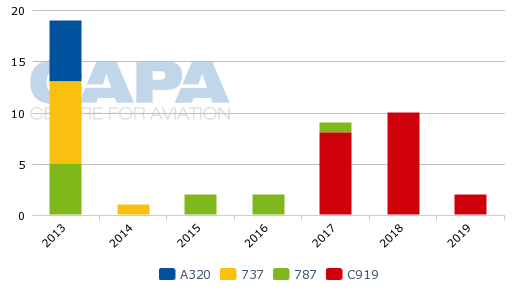 Source: CAPA – Centre for Aviation
* Excludes new aircraft that are coming from leasing companies
Aircraft operated by subsidiaries/associates of the main carrier may be listed separately.

Xiamen's international growth – 14.7% year-over-year – will primarily be around Southeast Asia, with the exception of a daily Quanzhou-Hong Kong service to start in Apr-2013, when Shenzhen Airlines will increase its Quanzhou-Hong Kong service to three times daily. Quanzhou is Xiamen Airlines' eighth largest base but does not rank in the top 10 for Shenzhen Airlines, although the two are the largest carriers at Quanzhou.

Opportunities are more limited in Northeast Asia compared to Southeast Asia: the Hong Kong and Macau markets are limited (Spring is targeting Hong Kong but it is the underdog in the city, and has a lower cost base to facilitate expansion), Taiwan is full of potential but access remains heavily restricted, Japan is weak following political relations, and South Korea is limited as open skies only exists with Hainan and Shandong Provinces, outside of Xiamen's home. 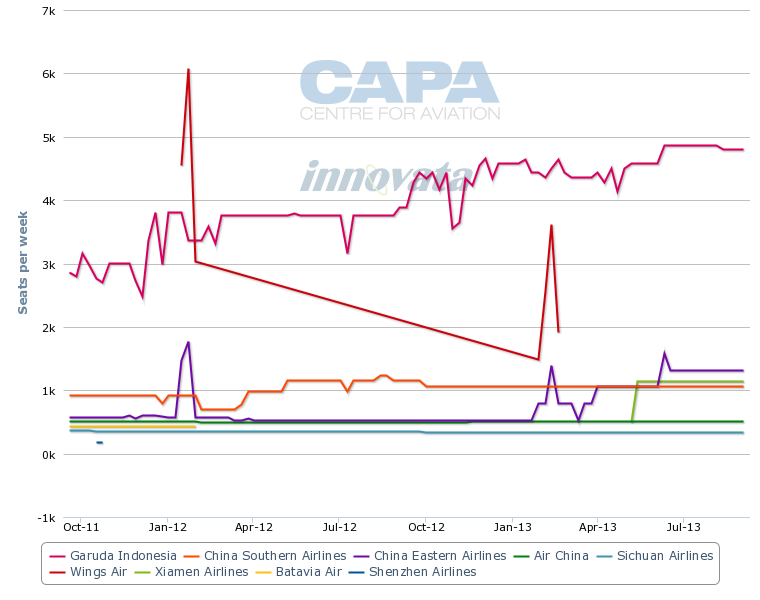 Dalian and Tianjin are both in China's northeast. Tag services will be added to Singapore, with three weekly connections constructed between Dalian and Xiamen, continuing to Singapore.

The domestic tags can cause confusion in local reports as the services will be listed as new international links even if there is merely a domestic service timed to connect or the same aircraft journeys on both sectors. The tag services from Dalian to Xiamen (four weekly serving onward connections to both Singapore and Kuala Lumpur) and Fuzhou and Dalian are new domestic sectors.

The Southeast Asian market can be difficult for Chinese carriers.The region's LCCs – in a demonstration of their efficiency and low costs – can make Southeast Asia-China routes unprofitable at certain times of the year. 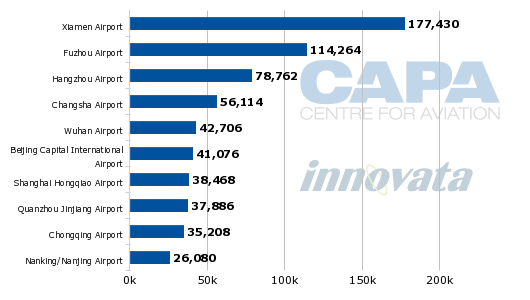 With Southeast Asian LCCs' large order books, cities like Fuzhou and Xiamen will soon come into focus as the new aircraft are delivered. After a period of growth into secondary Chinese cities, the Jetstar Group has quietened down. It will have more services to China from its forthcoming Hong Kong subsidiary. And AirAsia has been growing more quickly into mainland China from its Bangkok and Kuala Lumpur bases.

Domestic growth will be strong around the city of Xiamen

Domestic capacity growth is planned for 18.6%, and after building up other bases around China, Xiamen is focusing on its home for growth. In addition to the new Dalian-Xiamen service, Xiamen Airlines so far plans to increase frequency from Xiamen to Kunming, Chongqing continuing to Lhasa and Zhengzhou continuing to Xining. These are part of the 11 routes Xiamen Airlines plans to increase frequency on in 2013.

Xiamen Airlines' frequency in Xiamen has gone up and down in recent years, with a decline in the second half of 2012, but growth in 2013 will see it restore frequency to pre-2H2012 levels and then add beyond that. 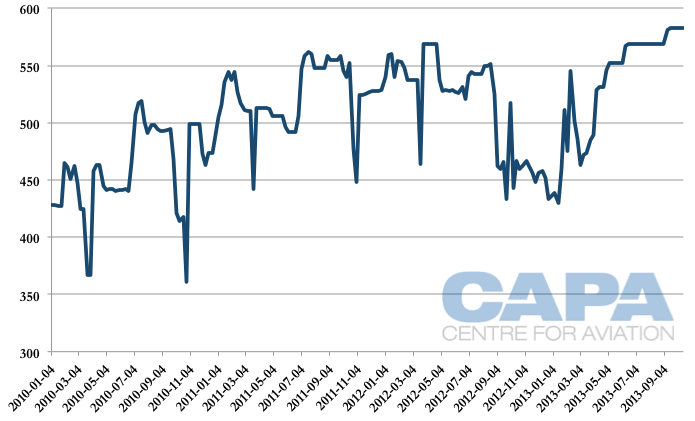 Like domestic peers, Xiamen reported higher passenger volumes in every month of 2012 compared to 2011 on the back of strong domestic growth, even if growth is declining from the double-digit of previous years to high single-digit growth. 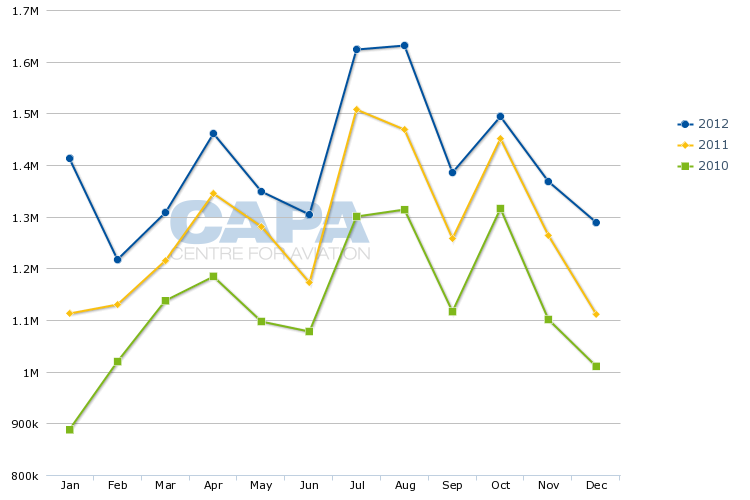 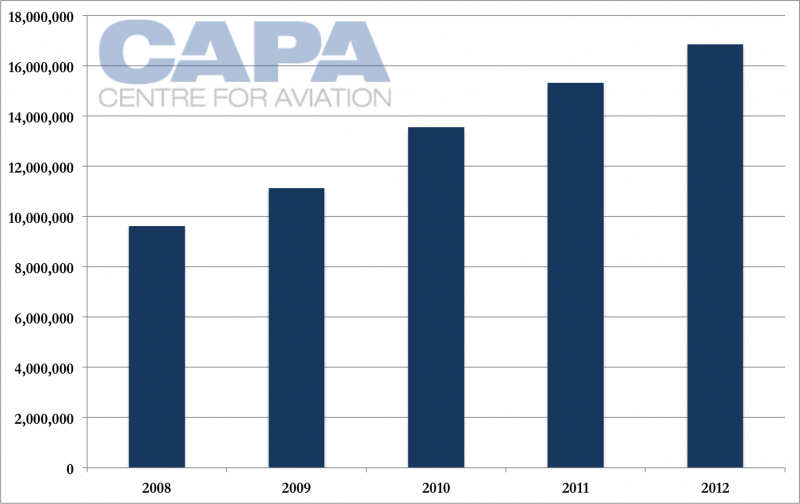 Xiamen Airlines' strong domestic growth in 2013 will be followed in 2014 with its expansion to long-haul routes, furthering Xiamen's international footrprint and marking the first time it will operate services outside Asia. Its six 787s on order for delivery from 2014 are being considered for routes across Australia, Europe and North America. Xiamen will continue to look for synergies and partnership opportunities with its SkyTeam members.

Xiamen's growth has been accompanied by profitability: the carrier posted a 2012 operating profit of RMB2 billion (USD321.9 million), up 17% year-over-year, and marking its 26th consecutive year of profitability, which by its own calculation makes it the world's most consistently profitable airline.

While 2013 may be a good year for growth, subsequent years will still be impressive: Xiamen aims to have a fleet of 200 aircraft by the end of 2020, indicating that aside from 787s it plans to take an average 13 new 737s every year for the rest of the decade.