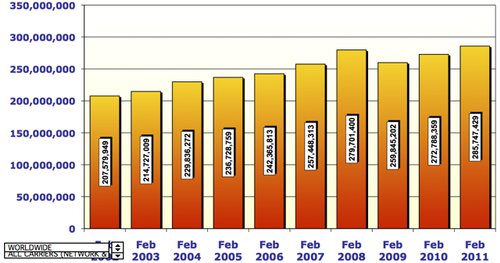 Low-cost scheduled capacity increased by 9% with notable growth in the Asia Pacific and Middle East regions again leading the way year on year. LCCs account for one in every five scheduled seats now offered on a global basis, marking a very slight year-on-year increase. 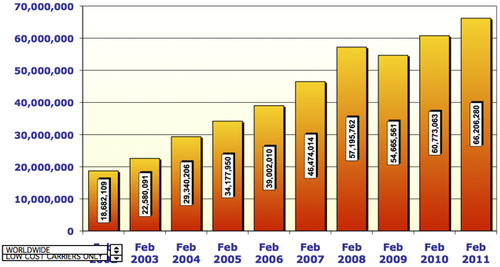 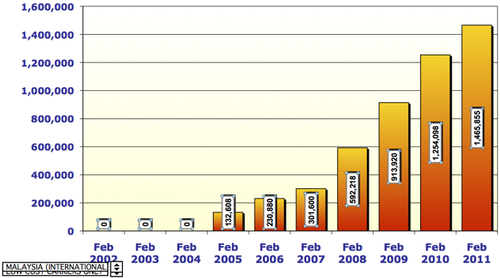 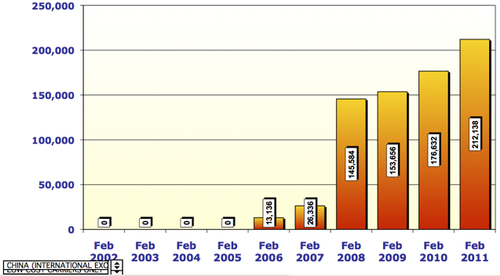 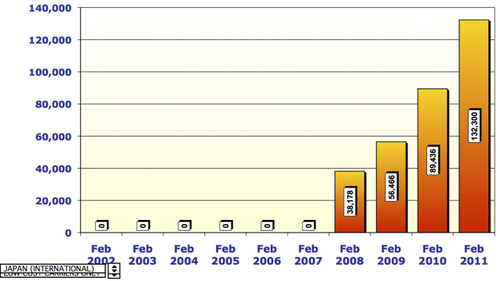 Although LCC capacity to/from Malaysia is four times the size of the Philippines LCC capacity, there are huge rates of capacity increases - 56% on domestic routes and 48% on international sectors. Meanwhile, the suspension of services from Merpati has had an affect on the figures for Indonesian domestic capacity, which is down 32% in Feb-2011.

Chinese carriers have been adding new services to the US, principally from Beijing and Shanghai.  More capacity is planned by the airlines to Los Angeles and Vancouver later in 2011. Meanwhile, India as a whole grew 8% on international routes and 11% on domestic services. The alignment of the Delhi hub by Air India appears to be benefitting the airport with the airport’s seat capacity increasing 21% against Feb-2010. This compares with growth of 3% at capacity-constrained Mumbai International Airport.

Meanwhile, OAG expects Tokyo Haneda to overtake London Heathrow in Feb-2011 when scheduled capacity will increase to 7.120 million at Haneda, with year-on-year capacity growth of 8%, compared with 7.115 million at Heathrow. Atlanta will remain the largest facility with almost 68,000 scheduled services planned in Feb-2011, although this marks a 4% year-on-year decline. However, the average capacity per scheduled flight is expected to increase by 4.8%, thereby indicating an increasing use of larger aircraft types at the airport.

All regional markets recorded year-on-year growth in the month with the exception of capacity to/from Central and South America. This region lost 3% of its seat capacity, feeling the impact of the loss of Mexicana services.

Although capacity declined in the Central and South American region, within lower South America scheduled capacity increased 12% year-on-year. The Brazilian market is showing the strongest growth, with a 14% increase in domestic capacity in Feb-2010.

This prompted UBM Aviation CEO Peter von Moltke to comment: "The current expansion in some South American markets may be at the height of a growth period. The impending rationalisation of carriers in the region, and the development of larger alliances such as that proposed by the LAN Group and TAM, could lead to capacity consolidation as network rationalization occurs.”

Scheduled frequency and capacity to/from Europe was the second fastest growing region among the largest markets with scheduled capacity increasing by 11% to 21.3 million seats. Frequencies increased 10% to 93,558. Growth within Europe, however, increased a modest 2% – in seat capacity and the total number of flights – to 59.5 million seats and 493,150 services.

With the economic downturn, some major European LCC airlines have reduced the amount of winter flying, particularly within the EU. The impact of this is most stark in the Irish market, where LCC capacity is down 10%. London Stansted has also been affected by the reduction in LCC flying, down 13%.

To partially compensate, EU LCCs have been entering non-EU markets. International capacity to Russia is up 31%, with growth of 79% to Turkey, 47% to Ukraine, 26% to Egypt and growth of 156% to Israel.

Among the network carriers, the Gulf carriers are adding more winter season capacity to Europe with Emirates, Etihad and Qatar Airways driving the rise in Middle Eastern capacity to Europe, particularly the southern Mediterranean destinations.

Noting this development, Mr von Moltke said that medium to long-haul carriers continue to build their presence in the European markets to secure increasing shares of the longer haul markets where traditionally yields have been higher. “Carriers such as Emirates, Etihad and Qatar Airways continue to expand frequencies and open new markets as their development moves forward and with increased frequencies expected to a number of destinations in 2011 this trend will only continue,” he said.

Aircraft delivery is also making an impact on the numbers, with Air France and Lufthansa operating more A380s, and KLM and British Airways accepting B777-300s.

The number of scheduled services both within and to/from North America remained constant year on year, although a slight increase in average capacity per flight resulted in more seats being offered. Total capacity to/from this region increased 3%, to a total of 15.5 million.

With few aircraft on order and two significant mergers to manage (ie Delta/Northwest and United/Continental) there is a considerable amount of schedule consolidation in the US domestic market.  OAG noted that even LCCs have had few aircraft deliveries to spur capacity growth. Capacity growth within the US market has therefore been marginal at 1%.

In Africa, OAG stated that a strategy of linking African points to hubs has resulted in expansion by Ethiopian, Emirates, Qatar, Etihad, Kenya Airways and Egyptair, all of which all add capacity and new services during winter.

Airlines from Europe were less active, although the A380 continues to operate between Paris and Johannesburg. There is increasing penetration of the African continent by the Gulf LCCs. Egypt and Morocco remain two of the main recipients of this capacity from carriers such as Air Arabia while flydubai has expanded into Sudan and Djibouti