Worldwide seat capacity has increased 6% to 301.6 million seats and frequency increased 4% to 2.4 million flights during Nov-2010 according to OAG’s Nov-2010 Schedules Database. The growth in the month means that there are an additional 16.2 million seats in Nov-2010 with an additional 100,595 flights with capacity growth occurring in all regions of the world.

OAG capacity and frequency for Nov-2010

Capacity in the month exceeded Nov-2007 levels to reach the highest level this decade with further growth expected in 2011. 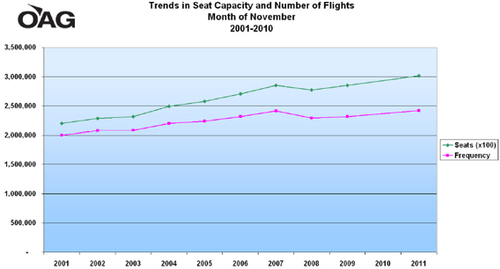 Atlanta, Beijing and London Heathrow are the world’s busiest 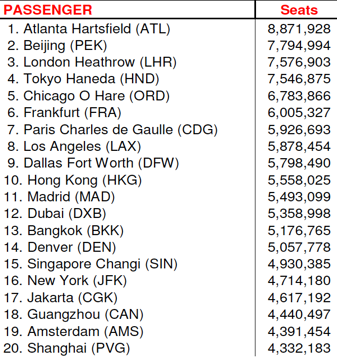 US airlines have added domestic seat capacity at an accelerated rate over the last four months and increased 3% in Nov-2010. US domestic capacity had been declining year-over-year with the first month of growth occurring in Aug-2010 (+0.8%). 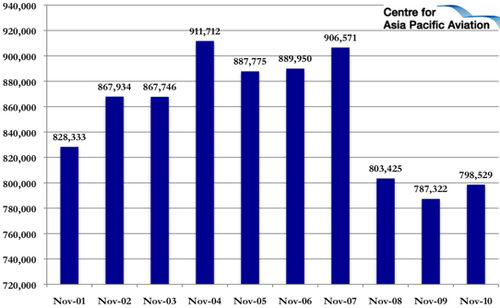 UBM Aviation CEO Peter von Moltke commented: “Confidence in domestic US travel appears to be returning. The upward trend in the rate of available seat capacity growth over the last few months is positive for travelers, who are likely to see continuing growth in available seats through the end of this year and into 2011.”

Although capacity within the US and North America overall is trending upward, Canada’s domestic capacity has declined in recent months and is down 1% year-to-date. Canada’s international capacity is robust, however, increasing 7% in Nov-2010, growing at a much faster rate than international capacity for the US which has slowed from 6% for Jul-2010 to 4% for Nov-2010.

Still showing an impact from the cancellation of Mexicana flights, the number of flights within Mexico is down 20% and capacity (seats) is 18% weaker for Nov-2010. Mexico’s international capacity reduction are more moderate, down 10% in frequency and 7% in seats, reflecting additions by other international airlines.

Mr von Moltke said: “Many carriers see Mexicana’s cancellation of flights as a profitable opportunity to replace the region’s lost service. Although frequency and seat capacity losses in and out of the country are still high, it is expected to begin to shrink, month-by-month. Mexico’s scheduled capacity, at least for international routes, could return to early 2010 levels by the end of the first quarter of 2011.”