Spain’s national airport authority, Aeropuertos Españoles y Navegación Aérea (AENA), the world’s largest airport operator, reported an 11.9% year-on-year reduction in passenger traffic (to 16.3 million passengers) in May-2009, with a steeper 20.5% reduction in cargo volumes. Aircraft movements were down 8.2% to 196,750.

Of AENA’s 15 largest passenger airports, Lanzarote (-24.5%), Fuerteventure (-21.1%) and Valencia (-20.9%) were the hardest hit, with year-on-year passenger traffic reductions in excess of 20%, while none of AENA’s 15 largest airports experienced passenger growth. The largest of AENA’s airports which reported growth was Reus (the 17th largest airport in terms of May-2009 traffic, with slightly over 189,000 passengers), with a 22.1% year-on-year passenger growth.

Passenger traffic at Madrid Barajas has been in negative territory for the past 12 months, entering a trough in Jan-2009 with passenger traffic reductions of almost 20%. The negative passenger growth trend preceded that of cargo, which commenced shrinking in Sep-2008, reaching a low (in excess of 20%) in Apr-2009. 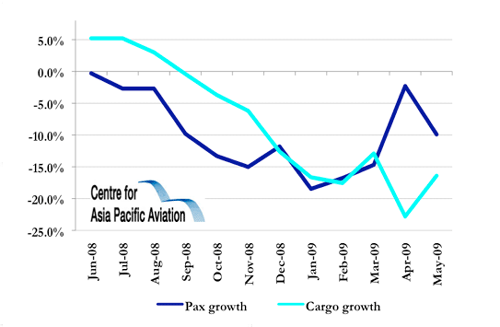 Madrid-Barajas Airport's fortunes are strongly linked to the situation at Iberia, which has a 49% capacity share and 53% frequency share at the airport, and increasingly Vueling.

Iberia this week requested the Spanish market regulator for an exemption to Spain's takeover law in the merger between LCCs, Vueling and Clickair. Iberia will own 45.85% of the merged airline, which is expected to commence operations in Jul-2009, following EU approval in Jan-2009. 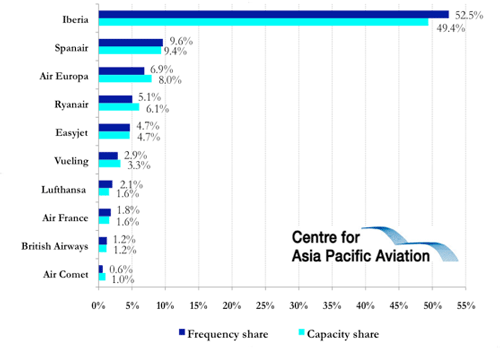 The new Vueling airline, which plans to establish a codeshare agreement Iberia, will have a 13% domestic capacity share and a 5.3% international capacity share, prior to any route rationalisations. The merged operation will also allow Vueling to double its size, thus becoming the leading domestic airline at its Barcelona and Seville bases, as well as at other Spanish airports, and to immediately reinforce its presence in several international markets. The combined airline is expected to transport 11 million passengers in 2010, to become the third largest carrier in Spain (after Iberia and Ryanair) and the fourth largest LCC in Europe. The carrier, which currently has a combined fleet of 42 aircraft, anticipates revenues of EUR800 million by 2010.

Barcelona Airport, AENA’s second largest airport, reported even worse passenger traffic and cargo volume reductions, of 13.7% and 26.5%, respectively, in May-2009. Aircraft movements were down 12.1% in the month. 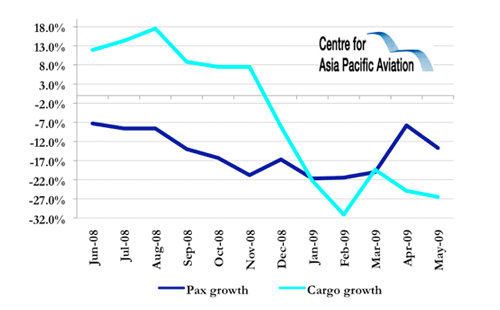 Barcelona Airport's fortunes are even more strongly linked to the outcome of the Vueling-clickair merger, with clickair and Vueling currently having a combined capacity share of 26% and frequency share of 21% at the airport, exceeding Iberia’s 14% and 20% share. 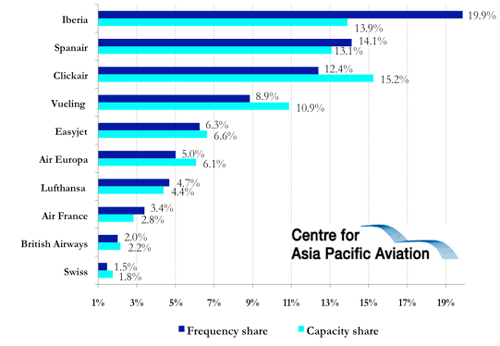 Significant changes ahead for the Spanish aviation market

Spanish traffic has seen some of the strongest growth rate in Europe over the past five years, aided by an influx of domestic and international LCCs, such as easyJet and Ryanair, into the market. However, this influx of competition and capacity reached unsustainable levels as the economy started to falter, and precipitated merger plans within the Spanish airline industry.

Another shakeup which will change the face of the Spanish aviation market is looming after the approval last year by the Spanish Government of the reorganisation of AENA, which involves the privatisation of 30% of organisation. Under the proposal, the Spanish Government will separate air traffic services and airport management. The governments of Madrid and Barcelona will retain a 19% shareholding in the management of their two airports at Barajas and El Prat, respectively.