Global airport passenger traffic was “very robust” in Oct-2010 according to Airports Council International (ACI), which added that passenger demand grew markedly in the month. Full-year growth is expected to hold above 6%, an “excellent” result following a 2% slump in 2009.

Looking at the regional results, ACI noted that it is “striking” that “growth curves are converging. Growth in North America and Europe is accelerating whereas it has been slowing down in Middle East, Asia Pacific and Latin America-Caribbean regions”.

ACI World Economics Director Andreas Schimm continued: “This narrowing of the significant spreads seen over the past 12 months is particularly visible in international traffic results. This month we see a mere 4 percentage points between North America (8.7) and Asia Pacific (12.5) and this performance contributes to a continuation of the strong double digit international growth we have seen throughout the year.” 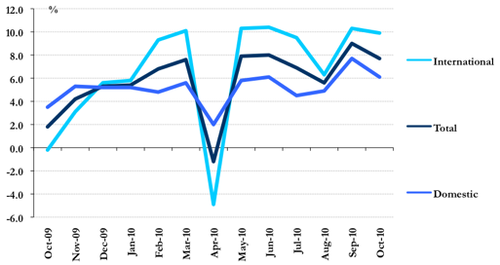 Growth remains weak or negative in some key markets

Growth however remains weak or negative in some key markets such as Japan, UK and Mexico as well as at some US airports, but they are out-performing the previous lows. Russia, South Korea, Argentina and Brazil spearhead Oct-2010 results, while Shanghai continues to outperform other Chinese airports driven by the World Expo. A number of Spanish airports have also reported very solid double-digit growth defying the flat national economy.

Meanwhile, ACI Europe Director General, Olivier Jankovec, in a separate release commented that recovery in Europe “remains fragile with significant disparities between national market. There is still much ground to be regained before Europe’s airports return to pre-crisis volumes of passenger traffic”. However, he noted: “It is reassuring to see that European air traffic continues to recover. September saw the strongest growth in passenger traffic registered so far this year, as well as airlines substantially increasing capacity for the first time, since the start of the crisis.”

ACI Europe also criticised the “recent taxation frenzy targeting air passengers” in Germany, Austria and UK, adding that it “defies economic logic”. Mr Jankovec continued: “These are ill-advised decisions, which are at odds with the role that aviation and airports in particular play as engines of economic growth. They are also short-sighted given the structural shift underway in the global aviation market to the benefit of Asia and Latin America. Adding new taxes will damage the competitive position of the European aviation industry – an impact expressly denounced by the Declaration of Bruges resulting from the Aviation Summit organised just last week by the Belgian Presidency of the EU.”

Slowing freight growth of 10% off positive base 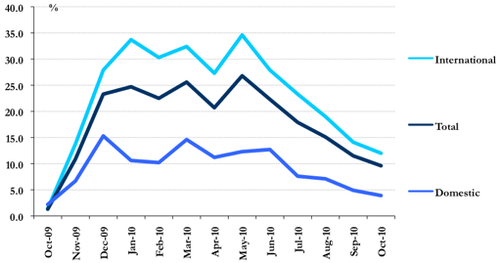 For freight traffic, ACI noted that the 9.6% increase remains a positive sign. Oct-2010 was the first month in 2010 allowing a comparison of worldwide traffic growth to a growth period in 2009. Freight traffic increased 1.3% in Oct-2009.

However, Mr Schimm noted: “Double-digit growth rates are not sustainable over the long run, of course, but it seems that growth can continue in a range between 5-10% in the foreseeable future.” He continued: “As with passenger traffic, a narrowing spread of growth figures indicates consolidation on a healthy level and underpins a positive outlook for the world economy for the next 6 months.”

The two largest international airfreight markets Asia Pacific and Europe recorded solid increases of 12.4% and 15.8% year-on-year respectively for and for the 10-month year-to-date period an increase of 27.5% for Asia Pacific and 23% for Europe. Only the Latin America – Caribbean region recorded a decline in October (-1.06%).

ACI concluded: “It seems the industry is moving into the post-recovery phase with less peak growth but a broader base of growing markets underpinned by stronger demand across all regions particularly in international traffic which bodes well for the rest of the year and supports a positive outlook for 2011.”