World airline passenger and freight traffic back above pre-recession peak; some “slowing” expected

IATA reported continued “strong demand growth” in international scheduled traffic in Jun-2010, as the industry recovers from the impact of the global financial crisis. IATA Director General, Giovanni Bisignani, commented that the industry “continues to recover faster than expected”.

But Mr Bisignani cautioned that there are “sharp” regional differences in the recovery path, stating: “Europe is recovering at half the speed of Asia with passenger growth of 7.8% compared to the 15.5% growth in Asia Pacific”.

During the month, international passenger traffic (RPKs) increased 11.9% year-on-year, for the largest year-on-year month of traffic growth in over 12 months. It comes off deeply negative figures in Jun-2010. IATA added that, following a dip in Apr-2010 due to the volcanic ash crisis centered in Europe, international passenger demand has returned to its upward growth trend, adding that passenger volumes are now 1-2% above the pre-recession peak in 1Q2008. 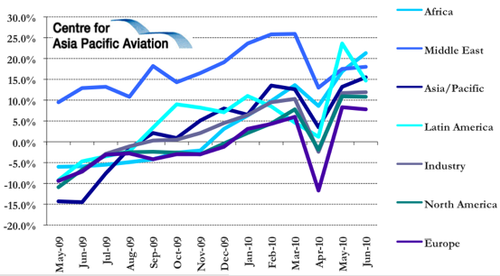 This double-digit traffic growth occurred despite only a 5.9% capacity (ASKs) increase. This was, however, the largest month of capacity growth in over 12 months. 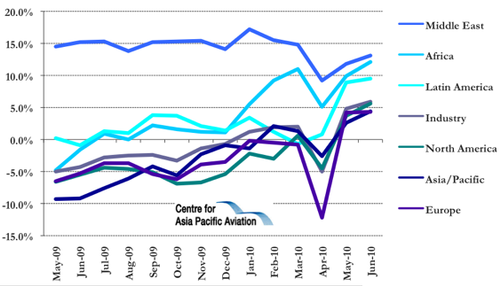 The gap between traffic and capacity growth pushed up the international passenger load factor to historical highs of 79.8%, for the seventh consecutive month with seasonally adjusted load factors near 79%.

Similarly, there was a 26.5% jump in freight demand in the month (following growth of 34.0% in May-2010, as some interrupted traffic from April’s ash crisis shifted to May). The strong surge in cargo traffic outstripped a capacity increase of 12.2%, resulting in volumes remaining 6% above the pre-recession peak in early May-2010. Load factors were also in line with historical highs at 53.8% for freight. 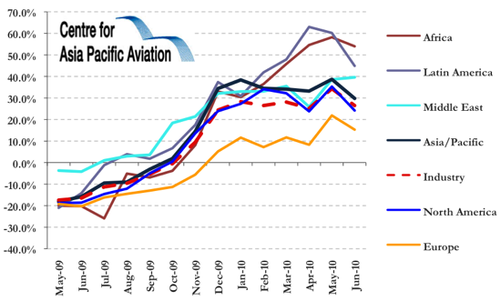 European carriers again showed the weakest freight growth, with the region still 5-6% below the pre-recession peak in freight traffic.

Cautiously optimistic but expects some “slowing” in months ahead

IATA commented that it remains “cautiously optimistic” about the outlook, stating “business confidence remains high and there is no indication that the recovery will stall any time soon”. IATA added that a “clear indication” of the growing confidence is the over 400 aircraft orders announced at the Farnborough Air Show. See related report: The Farnborough scorecard: 650 orders! Airbus tops Boeing as lessors come to the party

However, Mr Bisignani cautioned that new aircraft orders will “also make the challenge of matching capacity to demand much more difficult”. IATA also questioned “how long can the industry maintain the double-digit momentum”, warning that with government stimulus packages tailing off and restocking largely completed, "we do expect some slowing over the months ahead”.