Wizz Air continues to expand its presence in eastern Europe with the announcement it will expand its Belgrade base over the next nine months with the launch of five new routes. The Hungarian low-cost carrier will also increase capacity on six of its existing routes from the Serbian capital. This will see competition with Serbian national carrier Jat Airways heat up as Wizz Air becomes the second largest carrier in the nation.

Wizz Air originally established its Belgrade base in Apr-2011, when it based one A320 at the airport and began serving five new routes - Brussels, Brussels Charleroi, Eindhoven, Stockholm Arlanda and Stockholm Skavsta. These joined its existing services to Belgrade from Dortmund, London Luton, Rome Fiumicino and Malmo. The five new routes to be added over the next nine months as a second A320 is introduced at Wizz Air's Belgrade base include Skopje, Mulhouse/Basel, Oslo Sandefjord, Rhodes and Kerkyra.

Since Apr-2011 the airline has not launched any additional routes from Belgrade, however, it announced in late Jul-2012 it would cancel twice weekly Belgrade-Rome Fiumicino service on 24-Sep-2012. This announcement was followed a month later with news the airline planned to significantly expand its Belgrade network with the launch of five new services and increased frequencies on six of its existing routes from the airport.

The airline’s planned frequency increases will be on services from Belgrade to Brussels Charleroi, Eindhoven, Goteborg, Malmo, Munich West, and Stockholm Skavsta. Details of the exact frequency increases are yet to be announced. This expansion will be accompanied with the basing of a second A320 aircraft at the airport.

The five new routes include Skopje in Macedonia, Mulhouse/Basel in France, Oslo Sandefjord in Norway and Rhodes and Kerkyra in Greece. Only one of these routes, Belgrade-Skopje, is currently operated by another carrier (Jat). But LCC Norwegian Air Shuttle now serves Belgrade from Oslo’s main airport.

Belgrade Airport is Serbia’s main international airport and the base of Serbian national carrier Jat Airways. There is a secondary airports in the smaller Serbian city of Nis. But Montenegro Airlines is currently the sole operator at Nis Konstantin Veliki Airport with just one daily flight from Podgorica, according to Innovata data.

Jat Airways currently accounts for over 40% of international capacity at Belgrade Airport, according to Innovata data. This is followed by Lufthansa and Wizz Air which account for about 11% and 10% of Belgrade capacity, respectively (see Background information).

Wizz Air’s expansion plans will see it overtake Lufthansa to become the second major carrier at Belgrade and Serbia, with at least 36 weekly frequencies and 13,000 seats, up from 21 currently and 7,600 seats. (This is based on the six routes selected for frequency increases receiving one weekly frequency increase each). As a result, Wizz Air will increase its share of Serbia’s international capacity by at least 3ppt to at least 10%.

Wizz Air may not be an immediate threat to Jat Airways

While Wizz Air will compete with Jat Airways on five routes (after 30-Oct-2012, when Skopje is launched) the LCC’s other eight Belgrade routes will remain separate to Jat’s network. Wizz Air is avoiding the main routes from Belgrade on which there is already a considerable level of competition. 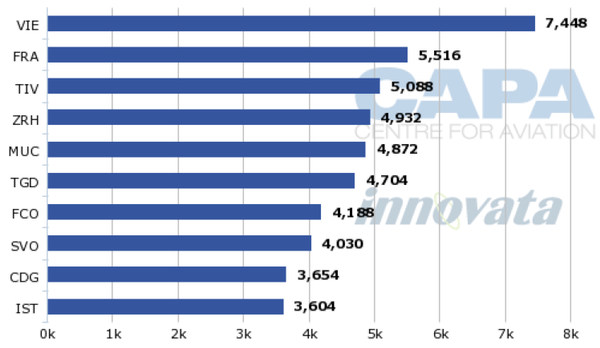 Of the top 10 routes from Belgrade, Wizz Air only directly competed on Rome Fiumicino, which is being cut on 24-Sep-2012. The only other major market that Wizz Air and Jat compete in is Belgrade-Munich but Wizz Air operates to secondary airport Memmingen Allgaeu Airport.

Wizz Air’s impact on Jat Airways is also limited by the fact that of the five routes they will be competing on, only one will be directly operated by both carriers (Belgrade-Skopje). The rest involve Wizz Air operating to secondary airports. Jat Airways will also continue to remain the dominant carrier on Belgrade-Skopje with more than daily service compared to Wizz Air’s twice weekly frequency.

The future of Jat Airways remains uncertain as long-awaited privatisation may be delayed indefinitely following Serbian Minister for Transport Milutin Mrkonjić’s comments in late Aug-2012. Mr Mrkonjić said the airline will not be privatised in the foreseeable future but will instead be restructured. The restructuring would reportedly involve a fleet purchase.

Wizz Air already has benefitted from the demise of one eastern European flag carrier this year, Hungary's Malev. The LCC is well positioned to fill any void created by any further consolidation in the region or network cuts by carriers in distress.

Wizz Air also has been expanding this year in Macedonia, another small eastern European market which has not had a flag carrier since 2009.

Belgrade attracting more traffic from across Europe and Middle East

Meanwhile Serbia’s low-cost penetration will continue to increase with Wizz Air’s expansion. Currently about 21% of overall capacity at Belgrade is provided by budget carriers. This is mainly contributed by Wizz Air but Germanwings, NIKI, Flydubai, Norwegian Air Shuttle, and Air One also have smaller operations at Belgrade.

Wizz Air expects its expanded network of 13 international services from Belgrade to deliver approximately 550,000 passengers per year to the airport while sustaining over 500 jobs in and around the airport. This is a significant number of passengers for the airport, which handled 3.1 million passengers in 2011. Even more expansion may be coming up with Wizz Air reportedly considering launching services from Belgrade to France and Spain including a potential service to Paris Beauvais from Jun-2013. This would see the LCC penetration rate in Serbia continue to increase after Wizz Air overtakes Lufthansa as the country’s second largest carrier after Jat Airways. 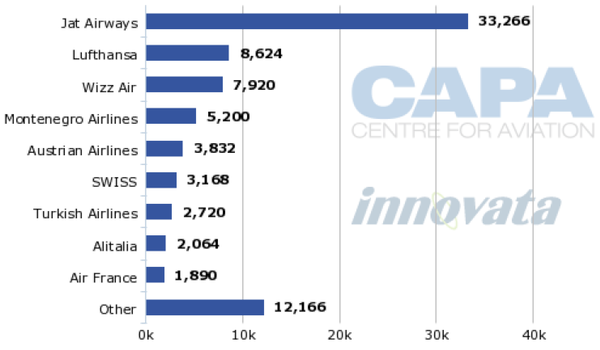