With revenue and passenger traffic up, Flybe sets sights on European expansion

Flybe, Europe’s largest regional airline, announced that it recorded strong gains in revenue and passenger numbers in its fiscal first quarter (Apr-2011 to Jun-2011) and expects to post an annual profit compared to last year's loss. The regional LCC also stated it has made “excellent” progress on its strategic growth plans, with the acquisition of Finncomm Airlines in the quarter. But investors are not fully comfortable with the carrier's plans, selling the stock down since its listing at the end of last year.

Flybe has released its first quarter operating data, which is scant on detail about its earnings performance.

Revenue increased 8.3% in the first quarter to GBP160.4 million. The result was bolstered by strong gains in passenger revenue, which increased 12.2% to GBP150.6 million. Aviation support and 'other revenue', Flybe’s other major revenue source, fell 29.7% to GBP9.8 million. 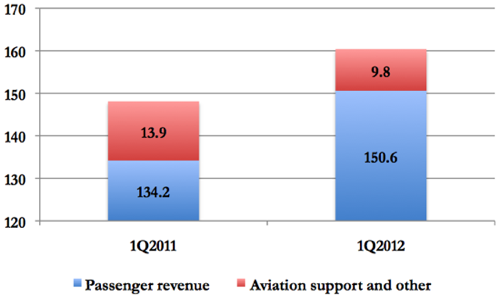 The strong passenger revenue growth outpaced the rise in passenger numbers, which gained 7.7% to 1.98 million. Capacity (seats flown) increased 7.0% to 3.1 million, which saw load factors increase slightly, by 0.7 ppt to 63.1%. 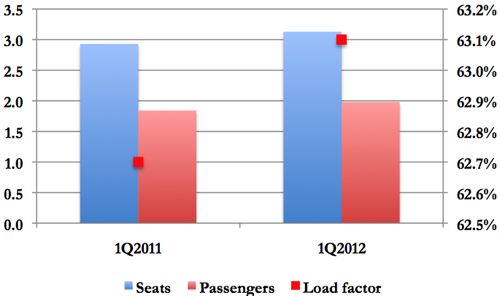 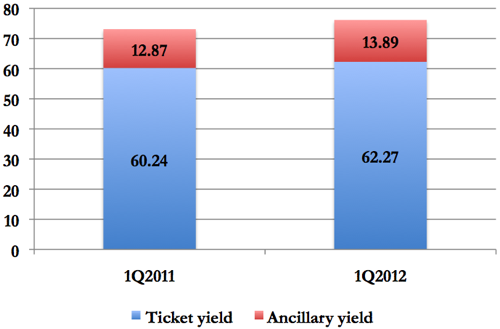 The airline maintained its leadership position in the UK domestic market, with a market share (including Scottish franchise Loganair) of 27.1%, a 0.5% increase over 1Q2010’s 26.6% share.

On the cost side, the airline said costs per seat are “broadly in line with expectations”, with the carrier maintaining a strong fuel hedge position to reduce its exposure to short-term volatility in fuel prices. Flybe hedges forward, on a rolling basis, between 60-90% of the future 12 month fuel and US dollar requirements.

Flybe's first major offshore acquisition, in Finland, has been completed.

Flybe and Finnair’s EUR25 million acquisition of Finnish regional Finnish Commuter Airlines (FCA, known as Finncomm) will result in the launch of Flybe Nordic. Flybe has a 60% stake in the start-up and will have three members on the regional airline’s board. Finnair holds the remaining 40% and will have two members on the board. FCA will continue operating its existing domestic routes, but under the Flybe brand, although the timeframe for this has not been disclosed.

Flybe has already taken over the day-to-day operation and management of the airline. Finnair has acquired the FCA fleet of nine ATR aircraft and now leases them to Flybe Nordic. Finnair has committed to purchasing the three ATR72s FCA ordered, and the aircraft will be delivered in autumn 2011 and autumn 2012 and leased directly to FCA at a market price.

CEO Jim French said the acquisition of FCA demonstrates the “excellent progress” the group is making on its strategic growth plans. Flybe is expected to push further into the European market to diversify its network and enter promising markets. With GBP103.3 million of cash on the balance sheet, Flybe claims it is in a strong position to participate in the consolidation of European aviation, particularly on the continent.

The CEO said the result is a “satisfactory trading and operational performance achieved against a continuing backdrop of high fuel costs and challenging economic conditions,” with particularly strong gains in revenue per passenger and revenue per seat.

Mr French said forward ticket sales revenue is up 6% year-on-year. He maintained the group’s full-year 2011/2012 forecast for a profit of GBP21 million on GBP650 million in top line revenue. The group is well placed to deliver growth in the future, with a powerful position in the UK domestic market. It has a clearly defined strategy to leverage its regional expertise and become an active player in the consolidation of Europe's regional market.

But investors have met Flybe’s earnings performance and growth plans with skepticism. The group debuted on the London Stock Exchange in Dec-2010 at 295p and in the nine months since the shares have halved in value. The fiscal first quarter update did little to boost share prices, which have gone sideways since the group’s May-2011 profit warning and subsequent report of a full-year loss for 2010/2011. Volatility on global share markets, general risk aversion and muted economic growth prospects in the UK are likely to weigh on the share price in the short-term. 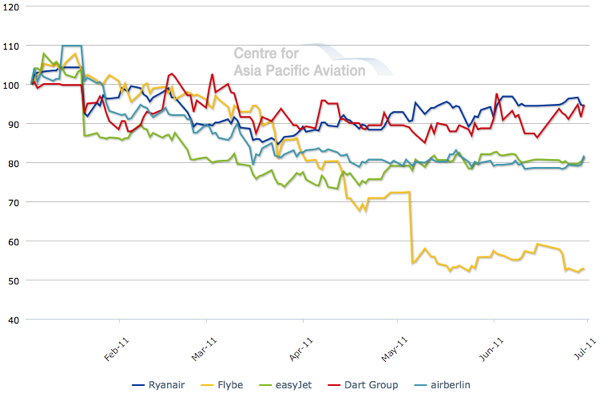