"What a difference a year makes!" - LCC stocks higher as profits flow

It was a good day for most global LCC stocks yesterday, as solid earnings reports and healthy outlooks prompted some heavy buying.

Southwest's shares closed up 3.5% yesterday to USD13.62 - its highest close since 23-Apr-2010. The carrier swung to a third-quarter net profit of USD205 million or USD 27 cents per share in 3Q2010 compared to a year-ago loss of USD16 million or USD 2 cents a share with CEO Garly Kelly aptly commenting: “Oh my, what a difference a year makes”. Analysts polled by FactSet Research were looking for earnings of USD 25 cents a share, on average. The stock has gained more than 19% so far in 2010.

Revenue in the recent period jumped 20% to USD3.19 billion as average passenger fare rose 16.3% to USD132.53. On the outlook the carrier stated it expects “solid” revenue improvement in the current period, with the carrier planning to boost capacity by 8% in 1Q2011 and 5% in 2Q2011. Southwest however stated it does not intend to increase its fleet next year.

AirTran (+0.7%), the LCC being acquired by Southwest, is expected to report a profit of USD 17 cents per share based on the average of 12 estimated compiled by Bloomberg.

Shares in Norwegian Air Shuttle also gained strongly (+6.4%) yesterday after it delivered solid third quarter results, with double-digit revenue and profit growth and showed promise in its battle to gain ground on Scandinavian rival SAS. Revenue stood at USD347 million in the quarter (+24.5%) with an EBITDAR of EUR103 million (+25.5%) and a net profit of USD64.8 million (+41.2%). Yields however remained weak in the period (-13%).

Arctic Securities analyst Kenneth Sivertsen commented: "Underlying results are pretty much as expected but there were some whispers in the market that suggested much worse -- so there is some relief. Also, Norwegian gave positive signs on costs - they are cutting costs better than analysts expected and their guiding going forward prices in expensive jet fuel - so we feel there is headroom on the costs side next year as well."

In Japan, shares in Japanese LCC Skymark soared 14.6% yesterday as it more than doubled its net income forecast for the 12 months ended Mar-2010 to JPY5,500 million (USD67.8 million) on the back of strong sales.

On the other end of the spectrum, shares in JetBlue Airways closed down 4.8% yesterday but gained in pre-trading. The carrier reported record third quarter profit and revenue and stated it expects momentum to continue through the current period. 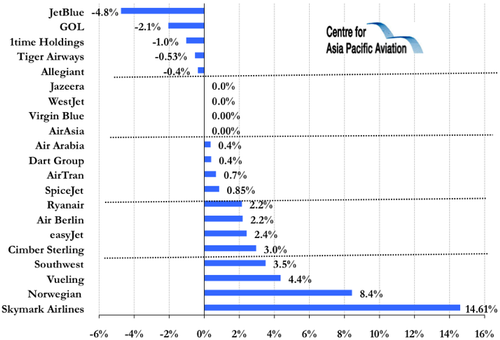