Following an early advance on Monday (24-Aug-09) as bankers refrained from announcing plans to increase interest rates as the economy appears to start recovering, the majority of North and South American carriers’ stocks were down at the end of trading, as oil prices increased later in the day (+0.4%), to USD74.20. The Dow remained stagnant by the end of the day, as the AMEX Airline Index fell (-0.4%).

WestJet (-4.5%) stocks tumbled after the carrier announced plans to slow its expansion due to the ongoing weak economic conditions. The LCC also announced the resignation of Executive VP of Operations, Ken McKenzie.

Republic Airways (-2.4%) meanwhile shed some ground gained over recent days, despite an announcement by SmarTrend during the day that it remains bullish on the carrier’s shares. According to the company, Republic is currently above its 50 day moving average of USD5.59 and 200 day average of USD7.74. Stocks ended the day at USD8.23.

Expressjet (-12.3%) ended the day down as speculative play reversed the carrier’s rise. The carrier ended up 69% the day prior, presumably due to its shares securities repurchase programme.

Southwest (-2.4%) was also down, after news broke during the day that it spent USD180,000 on lobbying in 2Q2009, on airline finances, passenger rights, employee training and other issues. The fall also follows a report by Reuters last week in which it stated the carrier’s stocks may continue to fall, following the failed acquisition of Frontier Airlines, three losses on the past four quarters, fare cuts and the offer of buyouts to staff. After peaking earlier in the month at over USD9.23, stocks in Southwest appear to now be gradually declining again, ending yesterday at USD8.47. 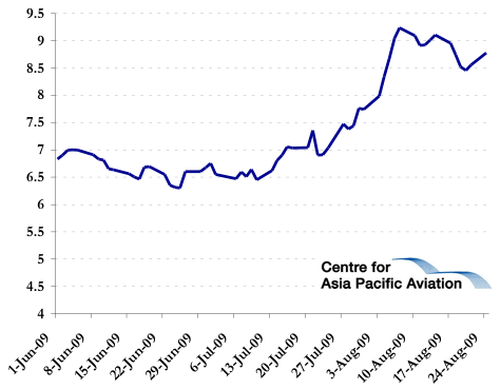 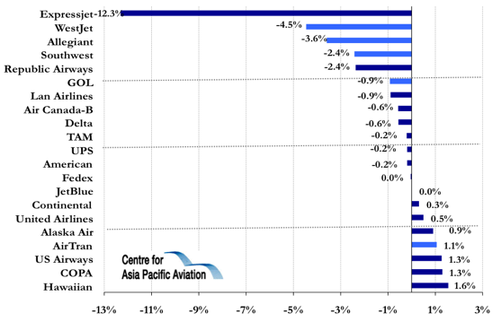