North and South American airline stocks were mixed on Thursday (03-Jun-2010), despite a number of carriers reporting improved passenger traffic for May-2010. Gains in airline stocks were mitigated as investors were cautious ahead of Friday’s key jobs report, with the Dow (+0.1%) gaining slightly in late trading, rallying from earlier losses.

The AMEX Airline Index (+0.4%) rose marginally as a result.

Also during trading, it was reported WestJet plans to sign five cooperation agreements with foreign carriers over the next 18 months in a bid to compete with Air Canada. Foreign carriers WestJet is targeting reportedly include British Airways, Japan Airlines, Mexicana, Delta Air Lines, Korean Air, China Eastern Airlines and Emirates.

Air Canada was flat for the day, despite reporting a 2.5 ppts rise in load factor for the month, to 82.0%. Traffic rose 6.0% on a 5.1% increase in capacity. President and CEO, Calin Rovinescu, stated this was the carrier’s sixth consecutive monthly improvement in traffic.

US Airways (-2.4%) took the day’s biggest decline, after reporting only a 0.3 ppt increase in load factor for May-2010, to 82.5%, a weaker result than other North American carriers which have so released their traffic results for the month.

AirTran Holdings (-0.3%) slipped. The carrier announced during trading that it is notifying holders of its 7% Convertible Notes due 2023 to require AirTran to repurchase their Notes for cash (the 'Put Option'). The Put Option expires on 01-Jul-2010. The Notes are, subject to certain conditions, convertible into 89.9281 shares of AirTran common stock per USD1,000 principal amount of the Notes. 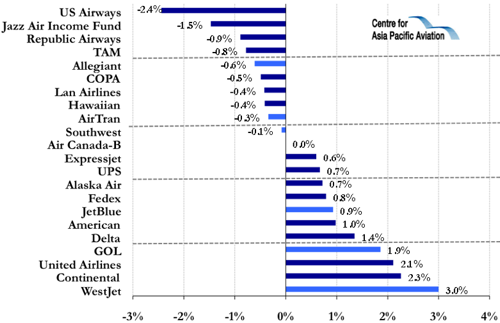