Vueling reported a worsened operating loss in the three months ended 31-Mar-2011 to EUR35.2 million, as revenues declined by 10% to EUR127 million and costs increased 5% to EUR162 million, driven by rising fuel expenses. Vueling is however aiming to keep its cost per ASK excluding fuel at 2010 levels in 2011 by continuing with its cost reduction programme. The carrier also expects to handle 12.7 million passengers in the full year despite unplanned capacity reductions related to the high fuel costs in 1Q2011.

On a unit basis, revenue per ASK declined by 4.6%, although ancillary revenue per passenger increased 2.5% to EUR8. The carrier stated the falling of Easter in March in 2010 and in April in 2011 had a negative impact on both passenger and RASK developments in the quarter.

Impact of key factors on RASK 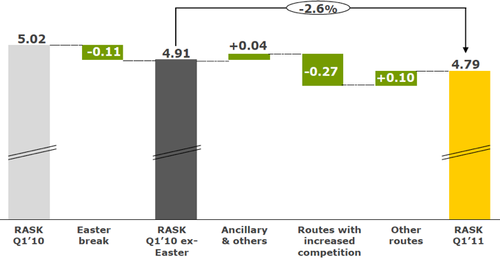 In terms of ancillary revenue, the carrier noted that baggage fee revenue reductions have been offset by an increase in other Vueling products, such as “Pack Go” for business passengers, connection fees and seat assignment in addition to new agreements with external partners. The carrier plans to continue its focus on ancillary innovation with the launch of new products 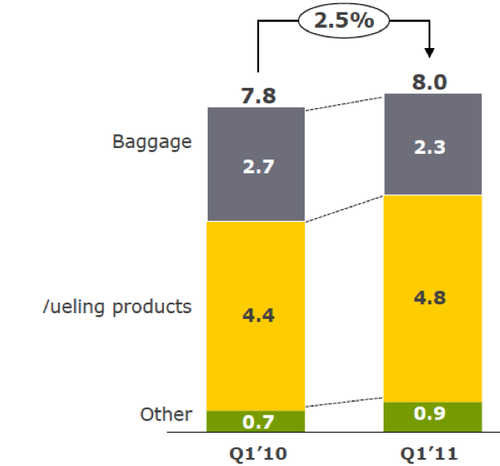 Meanwhile, unit costs increased by an unwelcome 11.6% in the quarter, impacted by rising fuel costs and capacity reductions in the quarter.

Impact of key factors on CASK 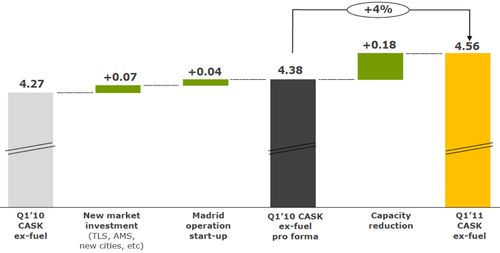 Vueling is however aiming to maintain its cost per ASK excluding fuel at 2010 levels by continuing with its cost reduction programme. The carrier also noted that despite the 41% increase in jet fuel prices in 1Q2011, fuel CASK experienced a lower increase (+20%) thanks to hedging policies in place. The carrier is 57% hedged at USD828/metric ton in 2Q2011 and 17% hedged at USD862/mt in 3Q2011.

The carrier plans to obtain EUR13 million further structural cost reduction in 2011, based on 75 initiatives, under its cost reduction programme, after achieving its 1Q2011 targets. 71% of planned savings have already been captured. 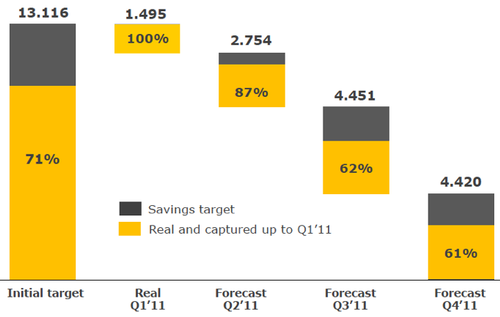 Vueling, in 1Q2011, witnessed weakness in the domestic Spanish market (+1% growth) and increased competition overlap (+15ppt), which resulted in significant fare price decreases (-15%). The carrier saw increased competition mainly at its Barcelona and Seville bases and stated that routes with low competition are decreasing. This heightened competition environment has limited the carrier’s ability to pass on fuel costs to passengers. 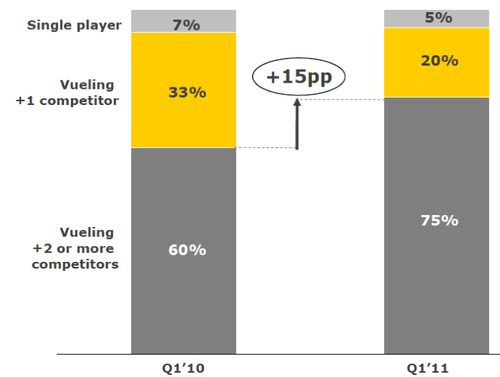 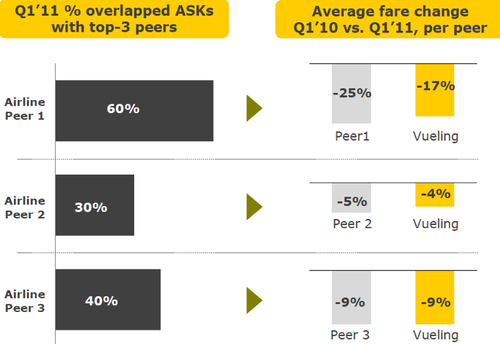 As a result of the increased fuel costs, the carrier implemented flight schedule reductions resulting in a capacity reduction of 6% year-on-year. The carrier had not previously planned any capacity changes for the year.

However, despite the capacity reduction, Vueling is still maintaining its target of 15% growth in 2011 to 12.7 million passengers, with the carrier expecting to transport 810,000 additional passengers ad opening seven new routes, despite unplanned capacity reductions in the quarter.  48% of the passenger growth is expected to come from the carrier’s Madrid operations, where the carrier will lease five aircraft from Mar-2011 to Oct-2011 to support this growth. 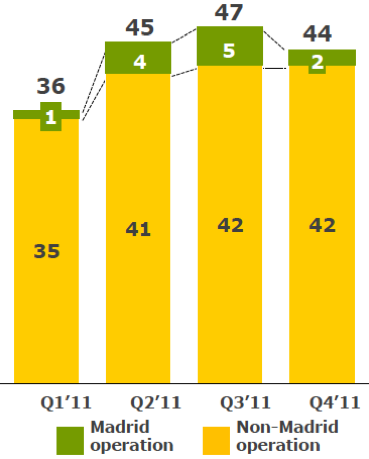 To benefit from connecting passengers 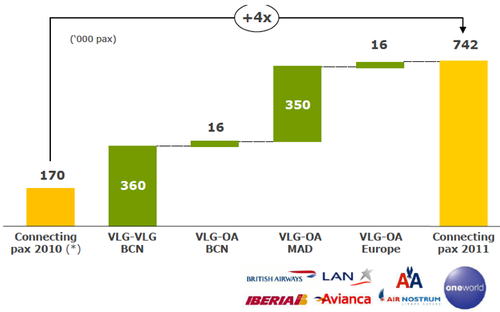 Vueling has added seven new markets from Madrid to feed other carriers. 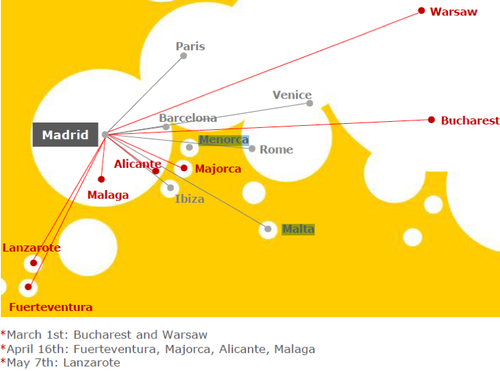 Vueling is also proceeding with its international expansion with new European bases in Amsterdam and Toulouse. These bases will have dedicated aircraft and are seeing slightly higher forward bookings than the Vueling average. 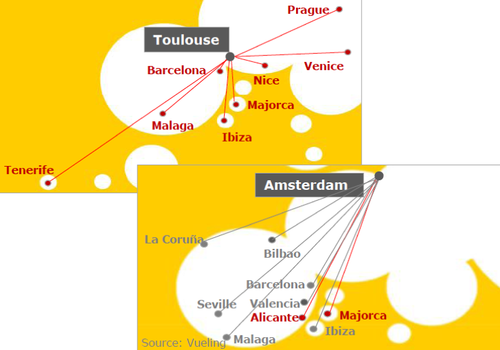 Vueling stated that it sees opportunities through likely market consolidation in Vueling markets and continued Europe-Spain market growth. The carrier also stated that it is having success through connecting passengers through its hub airports, with more interline agreement with other oneworld partner airlines expected. However, high fuel costs, a weak Spanish domestic market growth and sustained lower fare environment will remain as challenges for the Spanish LCC.