Vueling up, Iberia down on traffic results; Air France to benefit from Amadeus IPO; Ryanair slips

A slight majority of European carriers’ shares were down on Tuesday (13-Apr-2010), falling with the wider markets. European markets were pushed lower by a weak lead from Wall Street, a decline in banking shares and oil prices, which ended trading down 0.3%, to USD84.05.

Vueling gains on rise in traffic

Air France-KLM (+0.9%) also rose after estimating its share of Amadeus’ planned IPO could be between EUR235.5 million and EUR280 million, assuming an enterprise value of EUR6.7 billion to EUR8 billion for Amadeus. Amadeus plans to conduct the 25% IPO this year. The company is 45% owned by Air France-KLM, Iberia and Lufthansa.

Ryanair (-0.3%) and easyJet (-0.5%) both slipped. HSBC initiated coverage of the LCCs with positive ratings. The analysts rated Ryanair shares as ‘Neutral’ and easyJet shares as ‘Overweight’.

bmi CEO, Wolfgang Prock-Schauer, stated the carrier is “here to stay” and Lufthansa has no plans at present to sell the carrier, instead planning to focus on restructuring efforts. However, Mr Prock-Schauer conceded that Lufthansa could decide to sell the airline at some point. The CEO stated losses for bmi in 2009 would be worse than the pretax loss of GBP157.3 million recorded in 2008, but the restructuring programme would help halve losses in 2010.

Iberia down despite improved load factor

Europe Airline Daily is an efficient morning briefing on European airline developments. Other stories featured in today’s issue include: 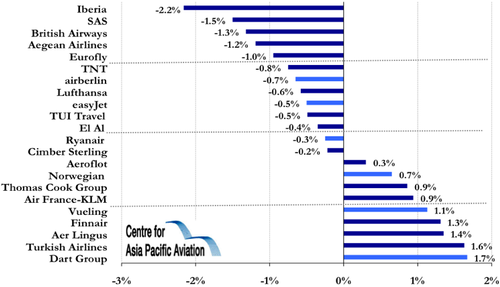