Vueling has, over the past month, announced plans to launch its first two international bases at Amsterdam Schiphol and Toulouse. The new bases represents a significant milestone in the company’s growth plan as Vueling enters a new phase of growth following the completion of its merger with clickair in Jul-2009.

The carrier, which is on track for full year profitability this year, commented that the new phase “validates the work of years of preparation to compete in the European market” with the new bases occurring as the Spanish market becomes increasing competitive as the likes of Ryanair and easyJet increase their presence in Spain.

Vueling on 06-Dec-2010 announced plans to open a base at Amsterdam Airport Schiphol in Apr-2011. This is the carrier's second base outside Spain and its ninth overall. 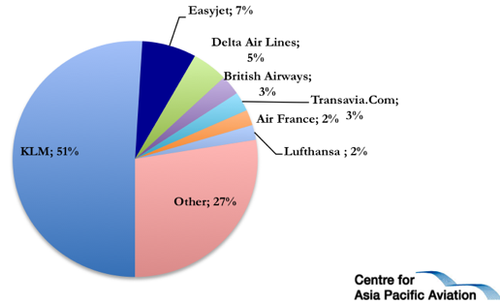 Vueling initially plans to station a single A320 at Amsterdam operating mainly to Spanish destinations. From Apr-2011, Vueling will add 28 weekly scheduled services to its operations at Schiphol. Outside of Spain, the carrier will add services from Amsterdam to Zürich, Alicante and Palma de Mallorca. During the summer period, Vueling will also add Ibiza, Secilla and La Coruna to its network.

The arrival of Vueling will add 6000 extra seats on flights to mainly Spanish destinations.  The carrier commenced services to/from Amsterdam Schiphol in Oct-2005 and has been growing in a steady but consolidated basis since then. The company has transported 2 million passengers through Schiphol since then.

The decision following the granting of an additional 7000 landing and take-off slots at the airport to the Spanish LCC. The Netherlands is currently Vueling’s third largest international market after Italy and France.

Vueling to open first non-Spain base in Toulouse

Less than a month before the Amsterdam base announcement, Vueling on 09-Nov-2010 announced plans to open a new base at Toulouse-Blagnac Airport in late Apr-2011.

Toulouse will be Vueling's eighth base and the first outside of Spain after its merger with Clickair in Jul-2009. Vueling will base one aircraft exclusively at the new base and invest EUR30 million over the next three years, which will generate 150 direct and indirect jobs.

The new operations at Toulouse Airport (TLS) will include four new direct destinations to Pisa, Venice, Ibiza and Malaga and new routes to Barcelona, Amsterdam and Paris. In addition, the airline will offer connecting flights to more than 40 destinations via its main hub, Barcelona El Prat. The airline will offer more than 40 weekly flights, amounting to more than 200,000 seats, until the end of Oct-2011. Further growth is expected beyond the summer 2011 season.

The Toulouse operation adds to the 106 weekly flights Vueling currently operates between France and six Spanish cities: Alicante, Barcelona, Ciudad Real, Madrid, Seville and Valencia. The company also offers a Paris-Orly and Rome Fiumicino route with three daily flights, which until now was its only route outside Spanish territory.

Air France is presently the largest carrier at Toulouse with a 52% capacity share followed by easyJet with a 20% share. 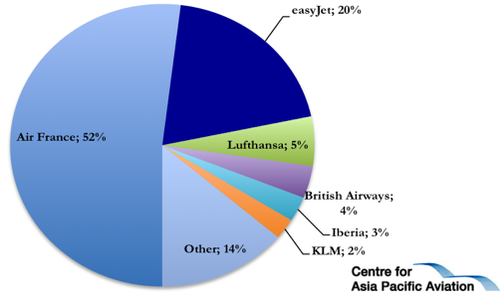 In the three months ended Sep-2010, Vueling stated its bases in Barcelona, Seville, Valencia and Bilbao have increased the number of destinations on offer, with the most significant growth occurring in Barcelona which has grown from 44 routes as of 30-Sep-2009 to 50 by 30-Sep-2010.

The carrier added that the Spanish market is “finally trending in the right direction” with smaller reductions in demand supported by a small supply increase.

Passenger and seat supply in Spain domestic and Spain-Europe market

The carrier added that the competitive environment has increased” significantly” in summer 2010. Ryanair and easyJet have increased their presence in the Spanish market. 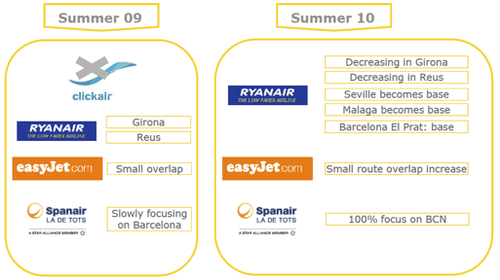 Also in the quarter, revenue increased 7%, which was outpaced by a 14% increase in operating costs while passenger numbers increased 5% to 3.5 million. The carrier has, in the 10 months to Oct-2010, already exceeded 2009 passenger levels. 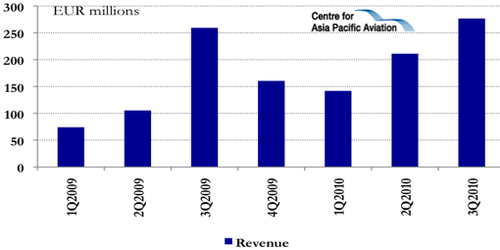 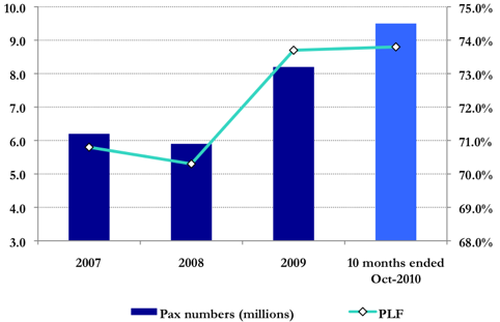 On a unit basis, unit revenue declined 4% although revenue per passenger increased 1% to EUR79.2. Unit costs increased 2% but declined by 4% excluding fuel. The carrier added that it has launched its 2011 cost reduction plan, which has more than 100 initiatives initially identified 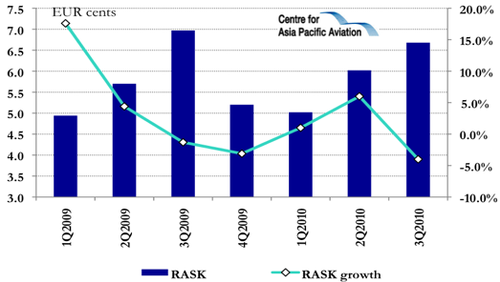 Vueling’s sector lengths increased by 4% to 912km while average block-hour-per-aircraft increased 7% to 12.5 hours. The carrier’s sector length will likely increase as its increases its presence at international airports and explores new business opportunities in countries including France and Italy.

Looking forward and improved cost reduction is expected for FY2010 with a 6% reduction expected. The EBIT result for the carrier in the full-year is expected to fall within the EUR60-70 million range. The carrier added that it expects an increase of competition in the short-term, with an anticipated 10% increase in fuel costs another concern. The carrier, meanwhile, has signed an agreement for three new aircraft fro 2011 to support its growth programme while other aircraft are still in negotiation.

Vueling expects to report an EBIT result of EUR60-70 million in 2010 with the carrier previously noting that more than 60% of the merger synergies between Vueling and Iberia’s LCC subsidiary, clickair, would be experienced in the year.

The carrier also previously noted that upon completion of its merger process, the carrier would “resume its path for growth”. The carrier is now doing this, planning two new bases outside of Spain, while also expanding its presence at its key Spanish base. The carrier has also signalled its intention to add new domestic bases.

Vueling, which is one of the few carriers in the European market that has, relatively smoothly and quickly, managed to combine two LCCs into a more competitive entity, is also selling passenger connections with Iberia’s long-haul services through Barcelona and is ready to connect with other carriers.

At the same time as integrating Vueling/clickair operations, and adapting to changes as a majority-owned Iberia subsidiary, Vueling has also continued to expand its product and focus to meet what it sees are current and future market opportunities in the increasingly competitive Spanish aviation market.