Vueling shares recover as it moves towards new sustainability; Dart Group up, SAS, Aegean down

The carrier is embarking on an ambitious renewal programme, towards a “New Sustainability Model”, announced by CEO Alex Cruz earlier this month. Like a number of other LCCs, Vueling is shifting position in its niche to compete more effectively for higher yielding traffic.

As the airline’s website defines its positioning, “we are considered a new generation airline, an airline where concepts that seem contradictory – like competitive prices, safe travel and style – become perfectly compatible”. Vueling, which merged with Iberia’s part-owned clickair last year, reported a 119.2% increase in passenger numbers for May-2010.

Carrying just under one million passengers for the month, the airline clearly cannot stay underneath the radar of the major operators on its intra-European routes and therefore is seeking to exploit the business travel trend to trade down – at least in price – on short haul markets.

This does involve considerable additional expense, which Mr Cruz hopes to keep to an “absolute minimum”, in order to be able to provide an attractive surface and inflight product. So there will be challenging moments for the carrier as it pushes to reap the rewards of these added costs. It will certainly be hoping to improve on its 71.5% load factor achieved in May.

Other share movements included Dart Group (+5.4%), which on 24-Jun-2010 released its financial results for the 12 months ended Mar-2010. Dart Group is the parent of Jet2.com and Fowler Welch Coolchain. The Group reported a “reasonably satisfactory” profitable result in the year, with operating profits of GBP22.5 million (a 58% year-on-year reduction), profit before tax of GBP22.2 million (a 33.7% reduction) and a net profit of GBP15.6 million (a 42% reduction).

Meanwhile SAS (2.5%) and Aegean (-2.5%) led the losses on a day when airline share prices were mostly marginally higher. 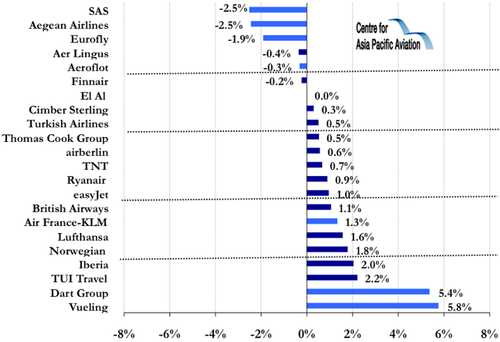