Vueling only gainer of the day; Aeroflot reports 14.2 ppts improvement in loads; easyJet down

European airline shares slumped with wider markets on Tuesday (25-May-2010), which fell to their lowest point in nine months. The banking sector pushed markets lower, due to a rise in interbank lending rates and continued concern over European austerity measures.

Vueling only gainer of the day

Vueling (+1.9%) was the only European carrier to witness a rise in its share price for the day, despite a drop in the Spanish IGBM (-3.1%). During trading, the International Monetary Fund called on Spain to make more progress in overhauling its ailing banks. Four Spanish savings banks yesterday submitted a proposal to the nation’s central bank to merge their businesses.

Freight also improved, with the carrier reporting a 13.7 ppts gain in cargo load factor, to 64.5%.

easyJet (-2.6%) also slipped, despite reporting a “substantial” increase in demand due to the striking cabin crew strike at British Airways  (-2.7%). Approximately 250,000 of the 500,000 easyJet seats available from the UK during the scheduled strike dates have been sold since the industrial action was initially proposed. 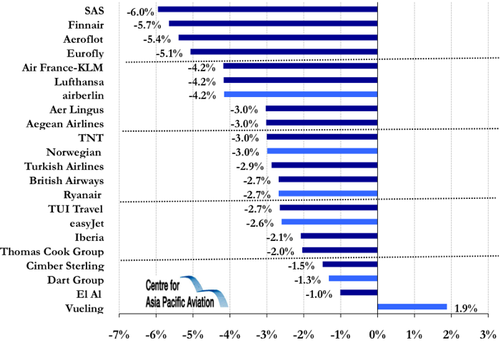