Aer Lingus shares shed 10% and British Airways gained 1.1% yesterday, 2-Nov-2009, despite investor apprehension ahead of the release of its financial results for the nine months ended 30-Sep-2009 (due out 06-Nov-2009), and threats of industrial unrest. Deutsche Bank downgraded the carrier from “hold” to “sell” yesterday.

Meanwhile, Vueling shares led the way up, with a 5.1% gain, as Aer Lingus shed a full tenth of its value on the day. Lufthansa lost a little ground (-0.4%) yesterday, with its CFO, Stephan Gemkow, also warning of though times ahead for the carrier. Mr Gemkow stated in an interview with Frankfurter Allegemine, that 2010 would be another “difficult” year.

Iberia, affected by the downturn in premium traffic, lost 2.1% yesterday. The carrier announced plans undertake a major overhaul of its intercontinental Business Plus class, in a bid to boost passenger numbers. As part of the overhaul, Iberia is removing a row of business class seats in order to expand the room between rows by more than 30 cm (from 152 cm to 183 cm). The change is being implemented on Iberia’s fleet of A340s, used on routes between Spain and the US, Latin America, South Africa and Tel Aviv.

The number of business class seats in the A340/600s will be reduced from 52 to 42, and in the A340/300s from 42 to 36. Three aircraft have been modified so far in Iberia’s hangars (the process takes approximately 300 person-hours per aircraft) and the last unit will be finished in Mar-2010.

Meanwhile, the company is also working on a new design and new fittings for its long-haul Business Plus class as of 2012. The changes to Business Plus come within the framework of the Spanish airline’s EUR150 Total Customer Care Programme.

Meanwhile, Ireland’s Clare and Limerick City councils reportedly urged Aer Lingus not to cut trans-Atlantic services and 102 cabin crew jobs at Shannon Airport, stating the actions will be the “death” of the airport. The councils also accused the carrier of giving Dublin Airport preferential treatment for its trans-Atlantic operations, and called on Aer Lingus to clarify their future intentions at the airport with the councils. The councils also reportedly called on Irish Transport Minister, Noel Dempsey, to ensure the economic interests of the region were being considered in the Irish Government’s policy on promoting balanced regional development. 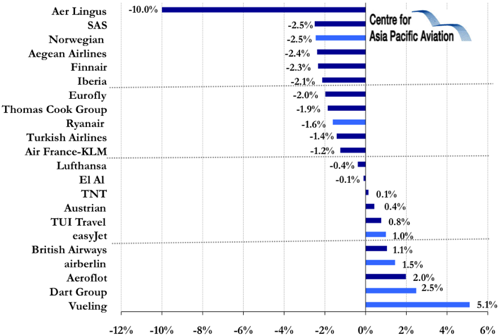