Vueling's growth this year, the largest since its merger with rival Clickair in 2009, underscores the airline's role as a cost-effective hub carrier with connecting flights at Barcelona's El Prat Airport, a status Iberia concluded it could not achieve in Barcelona, largely pulling out of the market in favour of specially-formed LCC Clickair. After the Clickair-Vueling merger, Iberia retained part ownership (46%, now controlled by Iberia parent International Consolidated Airline Group) while the merged carrier continued its focus on Barcelona. The partnership appears to be working well for both Iberia and Vueling.

That focus has been re-affirmed by the airline's intention to grow summer destinations served from El Prat by a further 10, bringing the total to 70, 23 more than served last year, and representing a 17% seat increase at El Prat. The growth is supported by the addition of four A320s and a single A319.

Vueling's new destinations are across Europe

While some European LCCs are focussing 2012 growth on specific regions (such as Ryanair at Palma de Mallorca), Vueling's 10 recently announced destinations span Europe. Some of the routes are seasonal and will be gradually added from Mar-2012, but all will be in place for the 2012 northern summer. Vueling will acquire one A319 and four A320s, bringing its all-A320 family fleet to just over 50.

Vueling will not face any competition between El Prat to Split, Lourdes, Malmo or Southampton. Limited competition will exist on other planned routes. SAS currently plans to operate a weekly flight to Stavanger, Ryanair three weekly flights to Lanzarote and four weekly flights to Edinburgh while Iberia serves Almeria and San Sebastian (but Vueling plans to have approximately 25% fewer seats than Iberia).

This outlook only considers point-to-point traffic; connecting flights are a growing source of revenue. Unlike many LCCs, Vueling offers and actively encourages connections, which make El Prat a hub providing hundreds of additional city pair links. 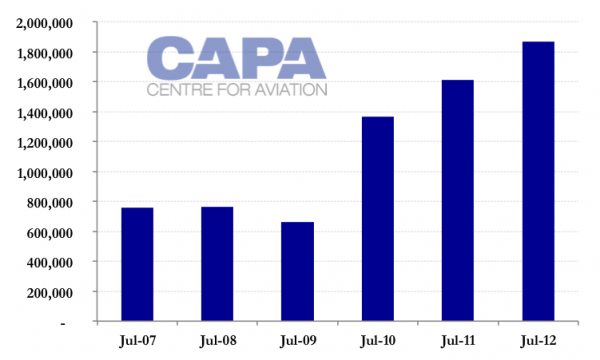 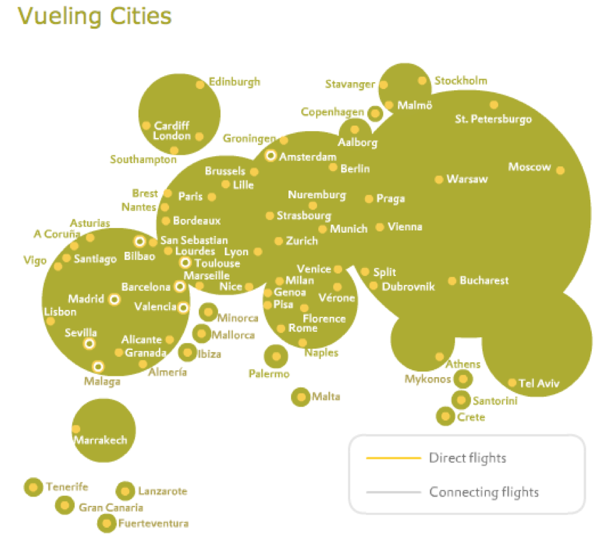 Vueling reduces at Madrid as Iberia Express prepares to enter

While overall growth will be the norm for 2012, Vueling’s previous growth at Toulouse will be reduced, suggesting its hub there has not been as successful as hoped. There will also be some flight reductions at Madrid, where services operated for Iberia will again be flown by Iberia or its forthcoming operation Iberia Express.

Iberia's 46% stake in Vueling has allowed the flag carrier to develop operations at El Prat, making it possible for Iberia to concentrate both its focus and resources on its main base at Madrid without losing Barcelona to foreign operators. Iberia last year found itself in a similar situation in Madrid where it was unable to sustain its high-cost mainline operation on short-haul sectors. With Madrid having demand from the corporate sector, as well as being the hub for most of Iberia's intercontinental flights – on which approximately 70% of its passengers originate from outside Madrid – a low-cost carrier was deemed not to be the solution. Instead, Iberia at Madrid will blend elements of its mainline operation with Vueling to create a lower cost premium carrier, Iberia Express, 100% owned by IAG.

However, the distinction between Iberia Express and Vueling is not marked, aside from being based at Madrid and Barcelona, respectively. Unlike Vueling, Iberia Express will have two classes, business and economy, and promises both will be innovative. Iberia will ask Iberia Express to serve a minimum set of destinations within a time period to meet connecting services and Iberia Express will be required to develop the best scheduling to meet this requirement. In return, Iberia Express is promised passenger feed.

Vueling has more independence than Iberia Express will when it commences in mid-year. Umbrella group IAG has not disclosed Iberia Express' cost base, but has hinted it will be considerably higher than Vueling’s, given its brief to focus on hub flying and on what is best for the hub operation rather than what is most efficient for the airline itself. Iberia Express will for example incur additional costs through operating two classes of service, but IAG does expect Iberia Express can avoid some of the legacy costs in Vueling that occurred as a result of its merger with Clickair.

On both cost and strategic levels, Iberia Express and Vueling will target separate markets, although inevitably with some limited overlap.

Then there is Air Nostrum, a regional airline with bases at Valencia, Barcelona and Madrid-Barajas airports. Since 1997, Air Nostrum has been operating as an exclusive franchisee of Iberia, which plans to maintain the status quo with the regional operator, serving smaller cities and with smaller aircraft, markets largely unsuitable for Vueling, Iberia or Iberia Express.

This seemingly logical strategy is, however, not universally popular. Before Iberia Express assumes its new role, it seems clear that a number of hurdles will need to be crossed. Introducing any form of subsidiary designed to help Europe's network airlines to compete on equal terms with the region's low-cost point to point operators has met rugged opposition from unions. Iberia's pilots' union, SEPLA, has vociferously opposed the new role for Iberia Express, generating a series of strikes which have seriously disrupted Iberia's services.

Vueling has, however, managed to avoid most of this opposition, adopting a much lower key role, as well as maintaining a degree of independence.

Though still significantly smaller than both Ryanair and easyJet, Vueling is now Europe’s fourth largest low-cost carrier by passengers carried, trailing its nearest rival, Norwegian, by about 2.5 million passengers in 2011. Vueling grew its passenger traffic by 12% in 2011 and the expansion planned this year should result in further double-digit passenger growth in 2012.

Even before the new seat capacity is added, the airline is the dominant carrier at El Prat, with over 156,000 seats per week, nearly a quarter of those available at the airport. With the addition of five new aircraft to the base, making a total of 28, its position at El Prat will be further entrenched. 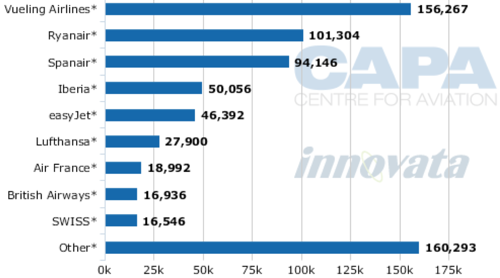 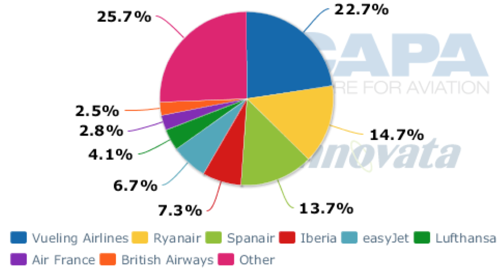 However, despite the airline’s dominance at Barcelona El Prat, not all of its top 10 routes, in terms of seats offered, are generated there. Its Paris Orly hub accounts for four of those routes, even excluding the Barcelona-Orly hub-to-hub service, which is the largest single route in the Vueling network. 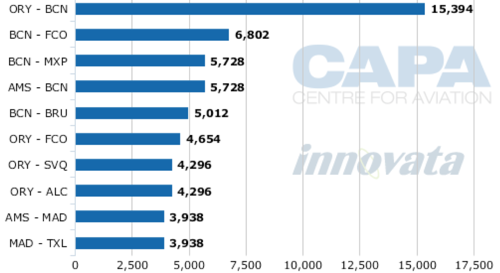 Like other LCCs, Vueling has adapted the basic low-cost airline business model and added some unique features. The carrier offers a number of seating options, including the possibility of a “duo seat” that leaves the middle seat free and comes supplied with a snack and drink included at no additional cost (an approach similar to the mainline European business class product). And, whereas most LCCs charge for seat reservations, Vueling does not.

The carrier also allows passengers to take, without charge, earlier flights on the day of travel on domestic routes and selected international services.

Vueling also has its own, very uncomplicated frequent flyer programme (FFP), Punto. This embraces a Visa card and a limited number of hotel and car rental partners, each of which can be used to accumulate and redeem awards points. Importantly in the context of Vueling’s connectivity with Iberia, the programme is also more or less interchangeable – for both earning and burning – with the Iberia Plus FFP.

Connectivity is a vital part of the future

According to CEO Alex Cruz, Vueling’s biggest asset and differentiator lies in its alliance with Iberia – and through it to BA-IB’s International Airlines Group. But Vueling is equipped to perform this connecting role with other partners.

As Mr Cruz told CAPA's Airline Leader last year, "From the start, we knew that we would not be shorthaul fundamentalists and that we would continue to break outstanding product myths which would bring us straight into the traditional airline world, but at a fraction of the cost base. Assigned and blocked middle seats, flexible fares, a worldwide frequent flyer system, all-points distribution, connecting flights, etc have all been mastered by Vueling while retaining cost leadership. This combination of business-approved product with our cost base and flexibility must surely be interesting to any carrier that does not have it."

The model seems to be working. Despite the economic woes that have beset Europe, and especially its home base Spain, the airline will show a profit for 2011 and expects the same in 2012.