Air France-KLM (+2.5%) shares were up after it reported “some signs of recovery” and narrowed its losses for the three months ended 31-Dec-2009. For 3Q2009/10, the group reported a net loss of EUR294 million, compared to a loss of EUR506 million in the previous corresponding period. However, the carrier still expects to report a 4Q2009/10 loss on par with last year’s result, as the economic environment “remains difficult”.

British Airways (+2.3%) gained after a number of analysts upgraded their FY2009/10 results for the carrier, after the release of better than expected 3Q2009/10 results last week. Citigroup reduced its operating loss forecast from USD596 million to a loss of USD485 million, adding that its expects the carrier to report an operating profit of USD217 million to USD276 million for FY2010/11. Credit Suisse, Deutsche Bank, RBS and Societe Generale also reduced their loss forecasts.

Also during trading, news broke that the carrier has reportedly approached former temporary contract cabin crew staff released in 2009 to cover cabin crew positions if the staff elect to strike later this year. The former staff have reportedly been offered six month contracts worth approximately GBP1,000 per month, with retraining for the staff to commence on 22-Feb-2010.

The very latest on British Airways and carriers from all over Europe can be found in Europe Airlines Daily. Other stories in today’s issue include:

TUI Travel (+1.1%) also rose after CEO, Peter Long, stated it group has received a “surprising” increase in demand for Summer 2010 holidays in the UK and Nordic region, following greater optimism in the jobs market and personal finances. As a result, it has boosted UK Summer capacity by 3% and Nordic capacity by 11%. The group reported a net loss of GBP124 million, compared to a loss of GBP67 million in the previous corresponding period, the day prior. 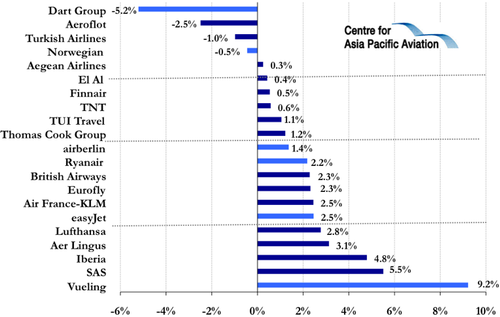