Vueling falls on Amsterdam plans; second base outside of Spain

Barcelona-based Vueling confirmed plans to open a base at Amsterdam Airport Schiphol. The LCC will base one A320 aircraft in Amsterdam and operate 28 scheduled services.

Amsterdam will be the LCC’s second base outside of Spain, after Toulouse. Vueling’s Amsterdam network will be dominated by routes to Spanish leisure destinations. The move will put Vueling in competition with Dutch LCC and KLM subsidiary, transavia.com, which operates an extensive Spanish network from its Schiphol hub.

Vueling shares were down 3% yesterday. Spain's IBEX 35 lost 1.3% and the euro lost ground yesterday as divisions emerged in the EU over how to contain the fiscal crisis.

Elsewhere, Virgin Blue is expecting a decision from regulators this week regarding its proposed trans-Tasman alliance with Air New Zealand. The tie-up was knocked back by the ACCC in Sep-2010 citing competition concerns, however both airlines maintain an alliance would boost capacity Down Under and allow the development of new routes. 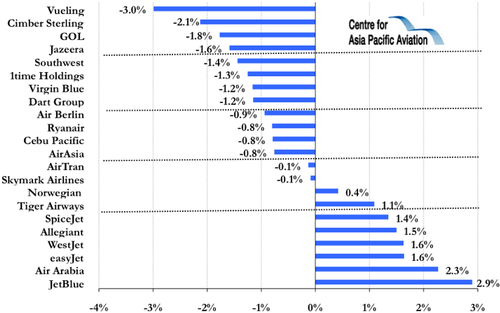