Vueling, clickair merger must be close

Vueling, Spain's up-market LCC, shares leapt 20.4%yesterday, presumably on speculation or more that the proposed merger with local rival clickair is likely to be approved by the EU Commission. This follows a 14.6% increase in the price on Friday. The EU announcement is expected later this week.

The two carriers are competitors in style, each leaning towards the frills of business travel, in what clickair CEO Alex Cruz calls a "third-generation" LCC model, Each uses A320s as well. Vueling has some expertise on hand when it comes to selling down. Part of the LCC's funds and guidance have been contributed by JetBlue COO, Dave Barger. JetBlue last year sold a minority holding to Lufthansa.

SAS too benefited from merger/takeover speculation, as the Lufthansa move appears to loom closer, with the Scandinavian carrier's shares improving another healthy 7.8%. And a merger of Spanair's rivals in the cutthroat Spanish market would not harm its owner, SAS, in sales talks.

SkyEurope (up 4.2%) also reclaimed a little of the 81% of valuation it lost during 2008, with white knight talk still in the wind.

Only easyJet lost ground on the day, among the European carriers. 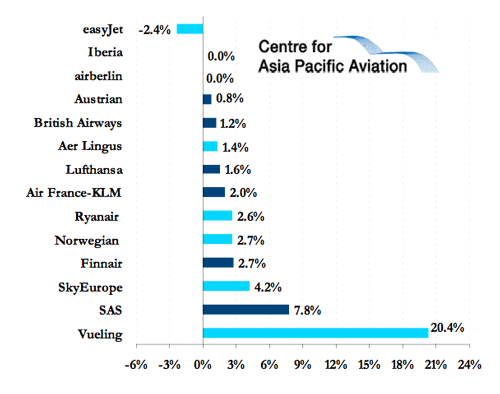