British Airways' shares fell a further 0.8% as investors consider Willie Walsh's comments at the IATA AGM. Reviewing industry conditions, Mr Walsh stated, "it's a very difficult environment for all airlines. Every airline is facing up with great honesty [to the conditions]".

Lufthansa's shares fell 1.3% as the carrier prepares to release its monthly traffic figures for May-2009 today. The carrier's CEO, Wolfgang Mayrhuber, told Der Standard newspaper that sales would decline by approximately 20% this year.

Air Berlin's shares fell 2.2% ahead of today's annual shareholders meeting. The carrier is executing its operating plan well amid the downturn, with yields holding up much better than most carriers.

Among the gainers, Vueling and Aegean Airlines rose 6.3%, while Thomas Cook Group surged 10% as the company stated its financing arrangements are completely independent from its insolvent parent company, Arcandor (see below). 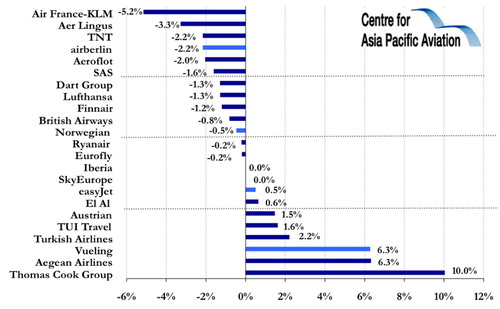 Air France-KLM's group RPKs dropped 8.1% in May-2009 year-on-year - exceeding the reduction in capacity (-5.7%), resulting in a 2.0 ppts reduction in load factor to 77.3%. Air France-KLM stated traffic was impacted by "unfavourable calendar effects in France" (three public holidays compared with only two in May 2008).

In the cargo segment, excluding Martinair, traffic and capacity fell 18.0% and 14.1% respectively, leading to a 3.0 point reduction in load factor to 61.8%. Air France-KLM stated, "this data confirms the signs of stabilisation witnessed in the cargo activity in recent months, as well as the progressive adjustment of capacity to demand".

On 09-Jun-2009, the Board of Thomas Cook Group plc ("Thomas Cook") noted the announcement made earlier today by Arcandor AG ("Arcandor"), its 52.8% shareholder, that Arcandor has applied to commence insolvency proceedings.

Today's announcement will have no impact on customers and is not expected to result in any adverse effect on any of the contractual arrangements of the Thomas Cook group. Thomas Cook's financing arrangements are completely independent from Arcandor's financing and are not affected by today's development.

In accordance with the relationship agreement between Thomas Cook and Arcandor, Thomas Cook has been operated as a standalone entity, separate from the Arcandor group. As a result, there are minimal balances outstanding between the two groups.

Thomas Cook will closely monitor the implications of this development in respect of Arcandor's 52.8% shareholding in Thomas Cook.

Thomas Cook confirms that it has not had any approach and is not in any discussions in relation to the acquisition of the Arcandor stake or in relation to a potential offer for the Company.

Manny Fontenla-Novoa, CEO, Thomas Cook Group plc, said, "we are saddened by the news announced today by Arcandor. Dr Karl Eick and his colleagues have worked tirelessly to address their financial difficulties and Arcandor has been a constructive and supportive shareholder of our business".