Volatile fuel prices a concern for LCCs around the world

LCC generally gained on Thursday (29-Jul-09), despite oil prices surging yesterday, regaining Wednesday's fall. New York oil prices gained USD3.66 to settle at USD67.01/barrel, while in London, oil prices for September delivery gained USD3.68 to settle at USD70.21. The increases follow a period of turbulence in the oil markets, which has seen oil prices slump from above USD147/barrel 12 months ago to as low as USD32 in Dec-2008. This turbulence suggests that there remains considerable speculative interest in oil prices, which, as happened 12 months ago, could quickly push prices to high levels with little explanation.

Leading the LCC gainers yesterday was Dart Group (up 6.5%), parent of successful LCC, Jet2.com. Dart Group reported improved profitability in the 12 months ended 31-Mar-2009, principally through a stronger trading performance at Jet2.com, as its leisure-sector and package holiday focus proves to be successful for the Group. The carrier also benefited from significant capacity reductions (of 21% over Summer and 49% over the European Winter), which also pushed up yields and load factors (+4 ppts to 78%). Despite the 28% overall capacity reduction, total aviation revenues grew by 6%, an impressive result for the carrier. Jet2.com also increased retail revenue by 64% to GBP4.93/pax, predominantly as a result of baggage charges and on-line seat booking, which was facilitated by the carrier’s in-house developed reservation system, which went live in Feb-2008.

Also in Europe, Air Berlin's shares slipped 1.8%, while Ryanair and easyJet both gained, up 1.5% and 2.3%, respectively. 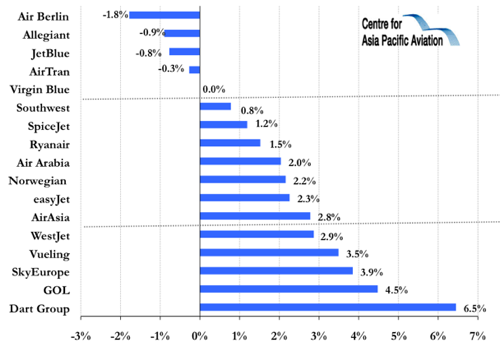