Virgin Blue’s shares slipped 1.9% yesterday, despite Virgin Blue Chairman, Neil Chatfield, at the carrier's AGM, upgrading the carrier’s FY2010 outlook from ‘breakeven’ to ‘profitability’, adding that the carrier is "well positioned to take advantage of any improvement in market conditions".

The carrier conceded that the economic environment, both globally and within Australia, "remains uncertain" despite some "encouraging signs of domestic recovery".

Meanwhile, CEO, Brett Godfrey, stated V Australia still expects to reach profitability within approximately an 18 month timeframe, stating, “we see no reason at all at this time to extend that forecast”.

Malaysia Airlines’ shares gained 2.3% on 26-Nov-2009, as the carrier stated Airbus was delaying delivery of the carrier's first A380 aircraft by eight months. The carrier will now take delivery of its first A380 in Aug-2011, instead of Jan-2011, as previously scheduled. Deliveries of subsequent aircraft will be pushed back to the latter part of 2011, and into 2012, according to CEO, Mr Zahruddin. Airbus stated the carrier would be compensated for the delay in the delivery of the aircraft.

Jet Airways’ shares closed up 5.8%, to a 52-week high, on Thursday, on reports that the carrier has started recruiting pilots, due to the recent delivery of B737 aircraft and an expectation of a continued increase in domestic traffic.The AI Express news (see below) helped too.

Jet Airways Chairman, Naresh Goyal, also helped the stock, stating the carrier is still in talks with Kingfisher Airlines regarding codesharing and a strategic alliance to produce operational synergies. The carriers entered talks in Oct-2008 regarding the proposed alliance.

Also in the India market, SpiceJet’s shares gained 5.0%, on news that Air India has shelved plans for a domestic LCC, to have been named AI Express Domestic Services, according to CNBC-TV18 reports, as the Directorate General of Civil Aviation was reluctant to approve the launch. The development is a positive outcome for existing LCCs in the market.

China Eastern Airlines' and Shanghai Airlines’ A shares were suspended from trading on 26-Nov-2009, after the carrier received notification from China Securities Regulatory Commission (CSRC), stating that a meeting by the Review Committee of the CSRC responsible for Merger and Restructuring of Listed Companies will  be held on Monday (30-Nov-2009) to review the proposed absorption of Shanghai Airlines by the company through share exchange.

The review will be the last government assessment of the merger plan after the merger gained approval from the Civil Aviation Administration of China and the Ministry of Commerce.  China Eastern Chairman, Liu Shaoyong, earlier this week stated he expected the merger to be completed by the end of the year. 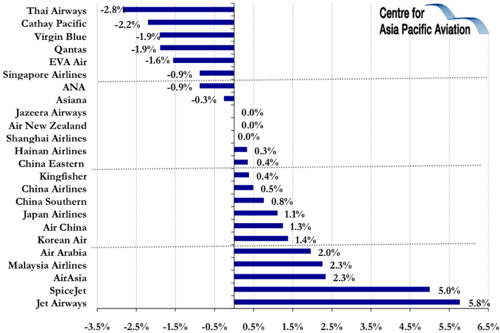