Virgin Blue’s shares slipped 1.9% yesterday, despite Virgin Blue Chairman, Neil Chatfield, at the carrier's AGM, upgrading the carrier’s FY2010 outlook from ‘breakeven’ to ‘profitability’, adding that the carrier is "well positioned to take advantage of any improvement in market conditions".

Meanwhile, CEO, Brett Godfrey, stated V Australia still expects to reach profitability within approximately an 18 month timeframe, stating, “we see no reason at all at this time to extend that forecast”.

The carrier, however, conceded that the economic environment, both globally and within Australia, "remains uncertain" despite some "encouraging signs of domestic recovery".

easyJet’s shares slipped 4.1% yesterday, as CEO, Andy Harrison, stated he does not forecast any recovery in demand for the next nine months. He added that he expects the LCC to continue to see weaker than usual consumer demand through the Northern Winter.

Mr Harrison added, "I think the worst is over but I don't see any improvement either and expect demand to be stable for the next nine months at least. Winter will be a continuation of what we have seen ... we will see continuing weaker consumer demand”.

In other easyJet news, the LCC has called for the introduction of mandatory emission standards for aircraft that would lead to a 40% reduction in CO2 emissions for next generation of aircraft. easyJet, which has an average fleet age of 3.4 years, called for a three step introduction of new legislation, starting with short-haul aircraft where the current aircraft families, the A320 and B737 families, are already over 20 years old. easyJet proposes that:

Ryanair’s shares were also lower yesterday, down 3.9%, after the carrier, in conjunction with Aer Lingus and Cityjet, released a report that stated the EUR10 tourism tax imposed by the Irish Government has resulted in revenue losses of EUR482 million, up to 3,000 lost jobs and 1.2 million less departing passengers, while generating EUR116 million in tax revenue in first year.

The report, commissioned by the carriers, from Amsterdam Aviation Economics,  found that the Irish airlines have absorbed most of the tax and have been forced to reduce capacity and move aircraft to bases outside Ireland as a direct result of the imposition of the tax.

In the India market, SpiceJet’s shares gained 5.0%, on news that Air India has shelved plans for a domestic LCC, to have been named AI Express Domestic Services, according to CNBC-TV18 reports, as the Directorate General of Civil Aviation was reluctant to approval the launch. The development is a positive outcome for existing LCCs in the market. 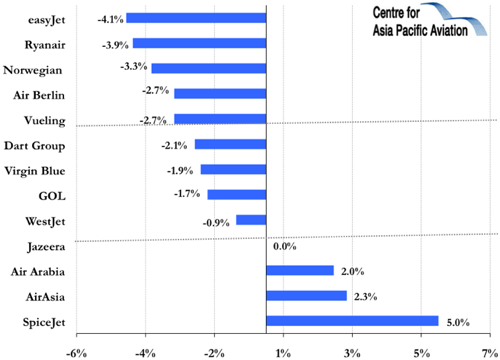