Virgin Blue has managed to grow its load factors on both domestic and international routes in Sept-09, compared with the same month last year, but in the process has reduced Australian domestic capacity (ASKs) by a substantial 4.9%, although passenger numbers fell by only 1.5%.

The carrier’s international data reporting gives little away, as the new long haul B777 US operations are blended in with the short haul Pacific Blue regional and domestic New Zealand routes, where the carrier has redirected much of the new short haul seat capacity that has been delivered this year.

Consequently there is little to be gleaned on international developments from this somewhat opaque report. The IASC’s recent award of sufficient capacity to permit the carrier to direct a new B777 aircraft onto the Australia-Fiji route will further cloud the picture, once that service starts.

However, the fact that Virgin is prepared to give away such a large domestic capacity share to Qantas/Jetstar (and Tiger) is an interesting move, suggesting that the carrier has yet to make its corporate business model bite into Qantas’ near-stranglehold. 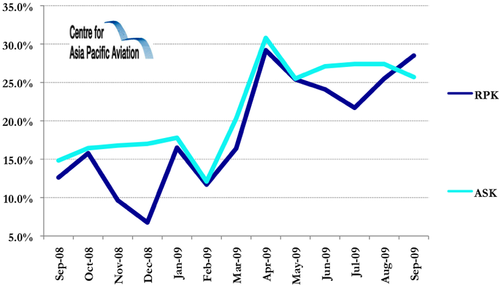 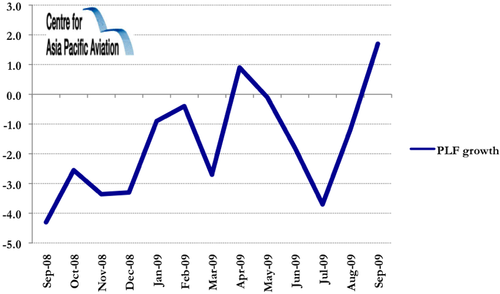 Virgin Blue is still bumping along the bottom, but its hold in the domestic market is still strong, even if a little diminished. The carrier does not report yields in its monthly traffic reports, but it is unlikely to have seen quite the same level of domestic decline in yields as Qantas – one perverse result of having a smaller corporate market share.