The carrier’s potential alliance with Etihad Airways has also faced opposition from Qantas. The CEO also stated the carrier is in a good financial and strategic position to expand its corporate market share, but still plans to maintain its position in the leisure market.

Also in the region, shares in Tiger Airways slipped 1.0%. Also yesterday, the carrier stated passenger increased 18% to 442,000 in the historically quiet month of Aug-2010, with an average load factor of 86%, for a 5 ppt year-on-year improvement. The carrier added that it expects “continued strong increases in passenger numbers” in the month.

The carrier is looking to increase service frequency to daily, after Malaysian authorities split up the seven daily rights to the airport. Malaysia Airlines was also awarded three times weekly frequency on the route, while Transmile received once weekly frequency.

Meanwhile, Viva Macau was officially declared bankrupt on 13-Sep-2010, following a creditors' meeting, where it was reportedly decided not to put forward any rescue plan for the company. The estimated amount of Viva Macau’s debts is still unclear, although media reports have suggested they may exceed USD125 million with a limited amount of assets. More than 160 creditors were represented at the creditors' meeting, accounting for more than 80% of the company’s debts. A total of 1,983 creditors have already been officially acknowledged, including ticket holders. 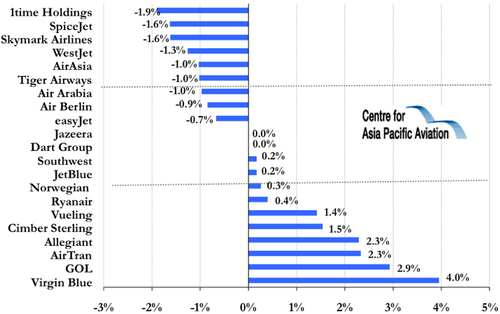