Virgin Blue Holdings reported a 62% slump in first half net profit in the six months ended 31-Dec-2010 (1HFY2010) to AUD23.8 million (USD23.8 million), at the bottom end of the carrier’s recently lowered guidance of AUD23 million-26 million. The AUD72 million underlying pretax profit was in line with guidance of AUD70 million-75 million but slightly down a year-on-year basis.

The carrier cautioned that the second half is expected to be “challenging” amid continuing pressure in the domestic travel market. "Further strengthening is expected in the business sector, both domestic and international, where confidence is returning and leading the economic recovery. However, in the domestic leisure market, flat consumer confidence, forecast industry capacity growth and flow-on impacts from the recent weather events will impact domestic demand,” the carrier stated. The carrier is however seeing “significant” improvements to its long-haul business and yield improvements in both businesses and stated it is “on track to significantly strengthen our position in both leisure and corporate markets in full-year 2012”.

Virgin Blue’s cautious outlook contrasts to its major rival, Qantas Airways, which earlier this month reported a large increase in first half profit and forecast its full-year result would be materially higher than the previous year.  Neither carrier will make a dividend payment for the period. See related articles: Qantas profits quadruple despite A380 impact; Qantas Group to increase capacity by 11% in 2011 as outlook 'continues to improve'; Jetstar close to overtaking Qantas as most profitable brand in group

The carrier also unveiled a new business-class product, new uniforms and new airport lounges as some of the initiatives Virgin Blue has unveiled as part of its bid to lure more corporate travellers. The airline group has flagged more changes to come over the 2011 calendar year, including a new marketing campaign, new product across the fleet and a revamped Velocity frequent flyer programme.

Source: Centre for Asia Pacific Aviation and Virgin Blue
Based on the conversion rate at AUD1 = USD1.00045
* Includes impact of reservation system outage in Sep-2010
^ compared with a loss of USD24.2 million in p-c-p

The carrier estimates a USD40 million loss from the Queensland floods as well as a USD10 million impact from cyclone Yasi.

Virgin Blue results hit by a number of one-off factors

Virgin Blue reported a 12% increase in revenue in the six-month period although this was offset by operating costs that increased at a faster pace. The 15% increase in operating costs was driven by higher fuel, marketing and labour costs. The carrier plans to offset the impact of rising fuel prices through fare increases, surcharges and hedging. On a unit level, underlying group CASK declined 0.4% while overall yields declined 2.5%. 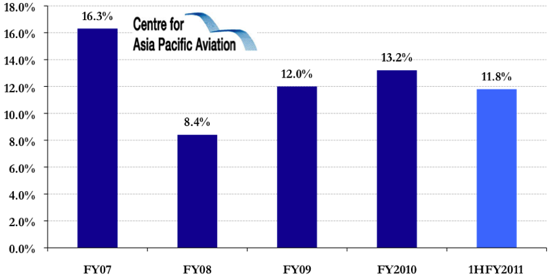 “This is a very solid result considering the impact of a number of significant one-off factors,” said CEO John Borghetti. The domestic leisure sector accounts for nearly 90% of the airline’s business with this segment severely affected by cyclone Yasi in North Queensland, the Queensland floods and interest rate rises during the period, which had a combined impact of AUD50 million (USD50 million). Currently, more than 50% of Virgin Blue's flights involve Queensland.

The firm stated “constructive” discussions are continuing with Navitaire over compensation relating to the breakdown of its reservation operating systems in Sep-2010. The carrier estimated the financial impact of the system outage at AUD15 million-20 million. Meanwhile, the severe earthquake in Christchurch this week is expected to hurt revenue although the carrier stated it is too early to measure to what extent.

Virgin Blue reported an underlying EBIT of AUD102 million in 1HFY2011 for its short-haul operations with revenue increasing 8% to AUD1.5 billion. Yields increased 1% despite competitive domestic market impacting yields in the leisure sector, while underlying CASK (total) declined 1.5%. Capacity increased 7.9% to be in line with full-year expectations. 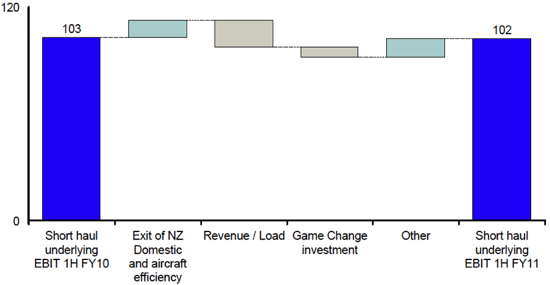 Domestic capacity growth remains under review, and the carrier is stating it "retains the flexibility to reduce capacity below the full-year forecast of 6%-8% if required".

Virgin Blue Group predicted international long-haul unit, V Australia, which reported an improved underlying EBIT loss of AUD7 million in the first half (from a AUD24 million loss in 1HFY2010), would see "improved” profitability" in the second half. The carrier is on track to "reach close to break-even" for earnings before interest and tax level for the full year. Long-haul revenue growth increased 86% to AUD230 million in 1H2011.

Virgin Blue noted that V Australia is now re-focussed on international long-haul markets and is expanding its international network with a focus on creating key global hubs through alliances. During 1H2011, the carrier reported RASK growth of 26%, a yield improvement of 15% and a 9.5ppt load factor improvement. Underlying CASK increased 8.7% driven by sub-optimal flying. 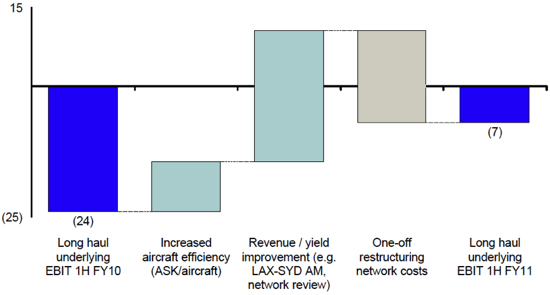 Expects business sector to grow in second half

Virgin Blue expects the business sector to strengthen through the second-half as the carrier seeks to capture a “larger share of the corporate market”. Mr Borghetti added that the carrier has made “solid progress on our strategy to build our share of high-yield corporate and government business, already accessing a number of major corporate accounts”.

The carrier’s market share in the government sector increased from 5% in 1HFY2010 to 11% in 1H2011 prior to the carrier’s new brand and product introduction. Virgin Blue wants to boost its share of the domestic business travel market to 15%-20% from around 10% by mid-2013, Mr Borghetti said.

The carrier, which stated the “timing is perfect to jump on the corporate market wave”, expects to benefit from its “transformational” game-change programme from FY2012. Key elements include a review of the carrier’s network, new alliance – with Etihad, Air New Zealand and potentially Delta Air Lines – and changes in branding, product, fleet and network initiatives 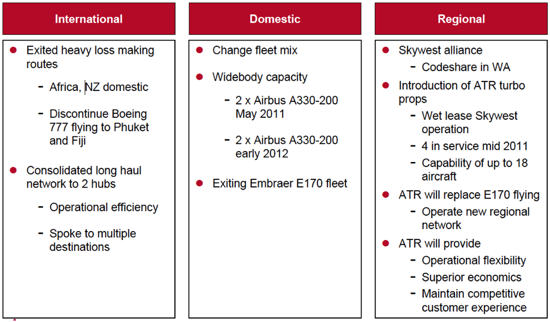 To benefit from international alliances

Virgin Blue stated it expects to see “solid” momentum from its international alliances which it is using to build a “comprehensive virtual international network complementing domestic business”. As part of this, the carrier has commenced its Etihad alliance operations and will operate its full codeshare agreement with Air New Zealand by mid-2011. The Delta JV is still pending.

Virgin Blue stated the Etihad alliance provides a route network that would otherwise have involved an investment of between 30 and 50 aircraft. The Etihad arrangement has already led to 18,000 people booking flights ahead of the first service on 24-Feb-2011. 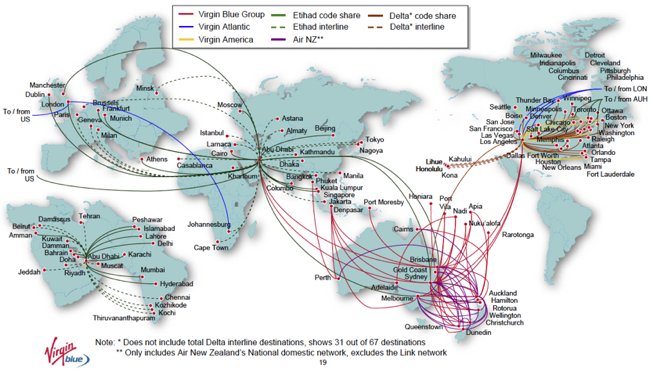 The expanded international network is a key requirement for corporate market penetration and to increase the value of the carrier’s Velocity FFP programme. The carrier is also reviewing its Velocity FFP, with a relaunch planned prior to 31-Dec-2011. The programme now has 2.4 million members and is growing by approximately 1100 new members per day.

Virgin Blue also announced plans to wet lease up to 18 ATR72 turboprop aircraft as part of the recently announced strategic alliance with SkyWest Airlines. The first four ATR aircraft will be introduced from mid-2011 with a further four to arrive in 2012 with the carrier stating the ATR will “form the foundation of our regional network plans”. The first six ATRs will replace Virgin Blue’s E170 fleet and the additional aircraft will operate to new regional destinations. 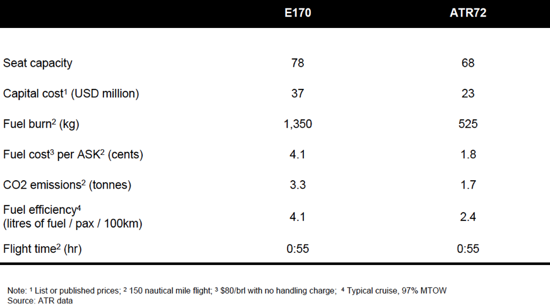 The carrier stated it has "finished the half year in a strong capital position, with a considerable cash balance of AUD772 million. Funding is also secured for 90% of all aircraft deliveries scheduled up to the years of FY12."

Virgin Blue also revealed its new business and “superior” economy class product to be introduced on services between Sydney and Perth. In a first for Virgin Blue, the airline will offer business class on its domestic network, with two new A330 aircraft commencing operation in May-2011 providing a three times daily service from Jun-2011. The new leather seats will have a 62-inch seat pitch, seatback multi-channel IFE and a range of food options.

The carrier will offer business class seats to all Australian capitals by the end of the year with Mr Borghetti, in an interview with Dow Jones commenting: "We won't have the whole fleet done by the end of the year but we will have enough done to serve the capital cities of Australia."  Mr Borghetti also stated the business-class product, which will be introduced in all new B737-800s, will not have the same seat pitch as the larger A330s. 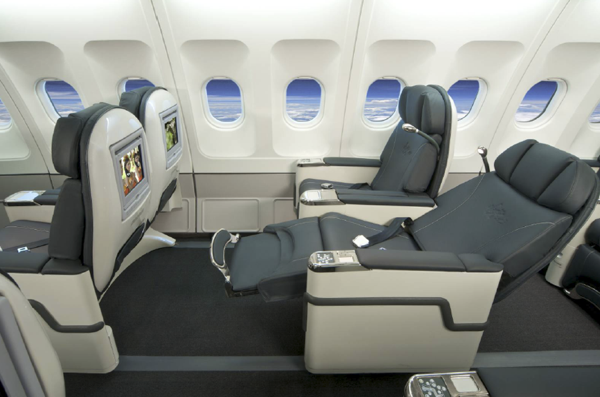 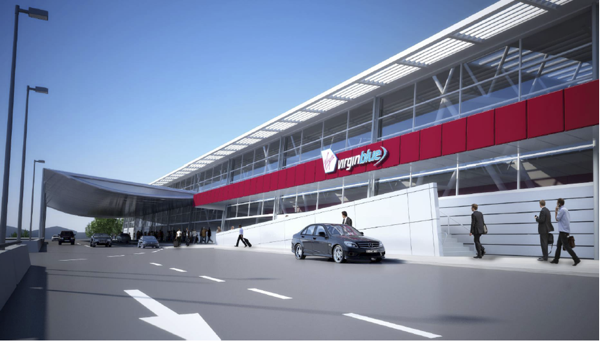 These product enhancements form part of phase one of the carrier’s new product offering with phase two to be announced prior to 30-Jun-2011. 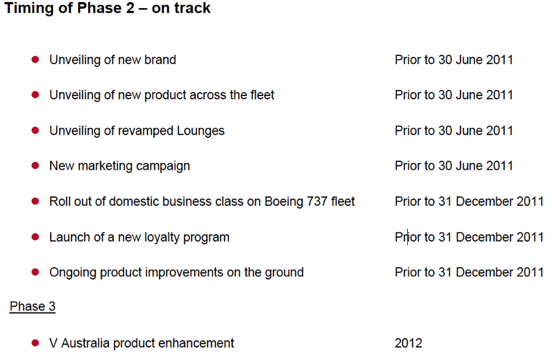 Virgin Blue, under the new leadership of Mr Borghetti, is radically overhauling its operations, product, image and direction. As Mr Borghetti stated in an interview featured in the Nov-2010 edition of Airline Leader: “I thought there were opportunities before I came here – but nothing like as many as there are.” The road ahead will likely face its ups and downs as Mr Borghetti converts the so-called opportunities into a more effective and resilient business model.