Virgin Blue, which late last month upgraded its FY2010 outlook from ‘breakeven’ to ‘profitability’, reported a 0.5% increase in passenger numbers in Nov-2009 to 1.5 million, for the fourth consecutive month of passenger number improvements.

The increase was driven by a 31% increase in international passengers (to represent 14% of the total), which partially offset a 3.1% reduction in domestic passengers. (Comparatively, Qantas Domestic reported a 2.3% passenger increase in the month (to 1.4 million), with Jetstar Domestic’s passenger growth exceeding this, at +4.9% (to 711,000). 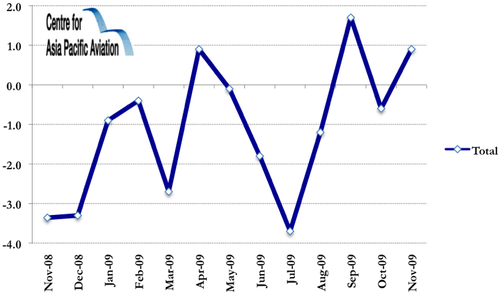 Over 12 months of double-digit capacity increases, but reducing domestic capacity

Load factors improved despite a continued double-digit network-wide capacity (ASKs) increase of 20.4% in the month, for over 12 months of double-digit capacity increases, driven by a 151% increase in international capacity (this was driven in part by the launch of V Australia operations in Feb-2009).

For 2010, Virgin Blue stated it plans to optimise capacity “in line with market-by-market recovery". Virgin Blue added that it is currently looking into its 2010 capacity requirements, stating that although demand is improving in some markets, it is yet to improve across the board. 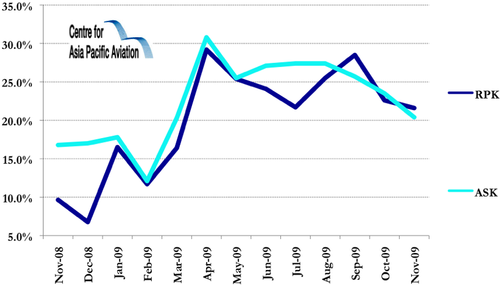 In the US, Allegiant’s shares were down 2.8%, after Jesup & Lamont Security downgraded parent, Allegiant Travel, from ‘buy’ to ‘hold’.

Jesup & Lamont stated the shares “have hit our price target and we do not see a short term catalyst for raising our price target." The target price of USD48 was set in May-2009, with the shares closing at USD48.84 on 22-Dec-2009.

Jesup & Lamont also issued per-share earnings for 2010 of USD4.50, ahead of the Wall Street consensus of USD3.96, due to an expected increase in leisure and convention travel to the carrier’s primary hub, Las Vegas, in 2010. The analysts added that while the carrier will face a need in coming years to replace its aging MD-80 fleet, the carrier is not expected to have difficulties finding replacement aircraft.

In South Ameirca, GOL’s shares gained 3.7% yesterday, as the carrier announced it had secured a USD150 million credit line, to finance aircraft acquisition prepayments covering aircraft scheduled for delivery in 2010.

Ryanair to suspend domestic Italian operations due to security rules 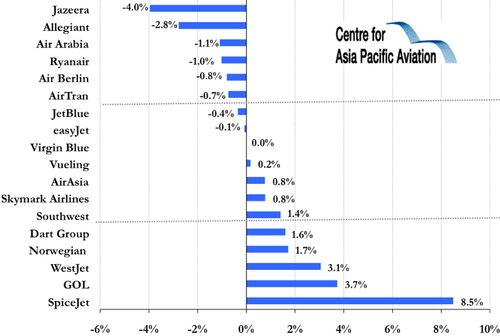