Virgin Blue today reported an underlying EBIT of USD76.5 million in the 12 months ended 30-Jun-2010, a 10.5% year-on-year increase, with a profit before tax of USD30.2 million in the period, compared with a loss of USD199.0 million in the previous corresponding period. Shares in the carrier declined 1.8% ahead of the result release today.

This compares to a Qantas Group underlying EBIT of USD420 million and a underlying profit before tax of USD338 million.

The improved profitability for Virgin Blue came as total revenue increased 13.1%, exceeding a 10.5% increase in operating costs to USD2,547 million. Also in the period, the carrier witnessed a 7.1% yield reduction, to USD 8.85 cents, with an underlying CASK reduction of 7.7% to USD 7.49 cents and an ex-fuel reduction of 1.9%. Virgin Blue added that it expects V Australia to break-even FY2011.

Announcing the results, the carrier stated: "Conditions continue to be volatile and competitive activity continues to put downward pressure on yields. The soft growth seen at the end of the fiscal year, at this stage, is not sufficient to suggest a consistent across-the-board improvement in market conditions."

The carrier’s CEO, John Borghetti, added:  “If market conditions continue to be volatile, and the early signs of recovery seen at the end of fiscal year 2010 do not result in a consistent and sustainable upward trend, we do have flexibility to adjust capacity through lease returns and rescheduling of aircraft deliveries."

The carrier today also announced the second phase of its network review with the introduction of A330-200 aircraft for its domestic network and an overhaul of its international long-haul network.

CEO John Borghetti said the introduction of the two A330-200s would increase the fleet to 90 aircraft and provide additional flexibility, capacity and product opportunities to better penetrate both the leisure, corporate and government markets.

The carrier added that, from Feb-2011, it would consolidate its international network to two strategic hubs in Los Angeles and Abu Dhabi providing a gateway to a “truly international network through partnerships”. This is part of the strategic partnership with Etihad also announced today, which the carrier descried as a “real game changer” which “positions us as a truly global player”. V Australia will also withdraw from its loss making B777-300 services to South Africa and Phuket.

Cebu Pacific will offer up to 214.6 million shares, including 30.7 million new common shares and up to 156 million shares, owned by CPAir Holdings. An additional 28 million shares have been put aside in case of an overallotment. The carrier has also increased to maximum offer price from the previous PHP95 per share to PHP150 per share. Total proceeds, excluding the overallotment, will be approximately USD100.8 million (PHP4.6 billion).

Proceeds from the IPO will fund the company’s expansion programme, which includes plans to increase its fleet from 29 aircraft to 47 in 2014.

Japan Airlines Corp is considering establishing an LCC to tap rapidly growing demand among international passengers, with the move to reportedly form part of its business restructuring plan, scheduled to be submitted to the Tokyo District Court next Tuesday. JAL stated it expects a foray into the LCC market to help strengthen its earning. 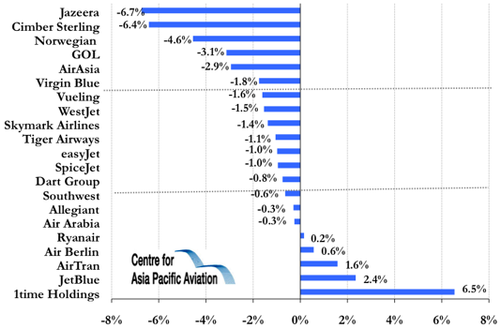