Virgin Blue Group has signed an agreement with Boeing, for up to 105 new B737 aircraft – by far the largest aircraft order in Virgin Blue’s ten year history and the Boeing’s largest order in the past 18 months. The agreement includes 50 firm B737-800 aircraft (with flexibility to convert to either B737-700 or B737-900), 25 options and 30 future purchase rights.

Deliveries are scheduled from Jun-2011 to 2017 and delivery options negotiated will “provide important flexibility to manage movements in market conditions” – and, in a overt warning to Tiger Airways, Jetstar and Qantas – “to aggressively ensure market share is not eroded and to provide additional growth options at Virgin Blue’s discretion”, according to the carrier.

Virgin Blue stated a “significant percentage” of the aircraft is intended for replacement of the existing narrow body fleet, while the remainder will be deployed to new routes and to boost frequency where demand dictates.

It is most probably the last major strategic move by outgoing CEO, Brett Godfrey, who has been negotiating with Boeing for nine months on the aircraft order. Mr Godfrey stated, “securing this agreement now places Virgin Blue in a strong position to prepare for steady future growth as domestic and short haul markets recover. It will also ensure a turnover of aircraft to maintain the youngest fleet of modern aircraft which is crucial for maintaining our commitment to on-time performance and the lowest cost base possible.”

Mr Godfrey added, “Virgin Blue was fortunate to see the opportunity and be in a position to take advantage, of the downturn in the market as we did back in 2001, to secure long term future supply of aircraft on attractive commercial terms.  Pricing cannot be disclosed but importantly net pricing is improved from 2001 levels, allowing for a lowering of the fleet’s cost base. We expect to finalise our funding arrangements for these aircraft shortly.”

The next major strategic step for Virgin Blue’s incoming CEO, John Borghetti, will be the airline’s move into the global alliances fold. See related report: Virgin Blue declares war on the domestic market; global alliance in the wind?

Another carrier seeking finance for its fleet expansion plans is the Philippines’ Cebu Pacific. The carrier, which suspended its initial Jan-2008 IPO has been forced to delay the capital raising again overnight, this time due to the timing of the national elections next month.

The IPO, following hot on the heels of Tiger Airways’ listing in Singapore, was expected to launch next week, with a listing on 03-May-2010. National elections will be held on 10-May-2010.

Cebu Air planned to offer 125.25 million new shares at a maximum price of PHP95 (which would raise around USD260 million), plus 110.3 million existing shares, with an over-allotment option of 35.3 million shares.  Deutsche Bank and JP Morgan are joint global lead managers

Cebu Pacific stated, “despite strong interest in the IPO at this time, it is in the better interests of the stakeholders to pursue the listing after the coming elections”. A new date for the IPO has not been disclosed. 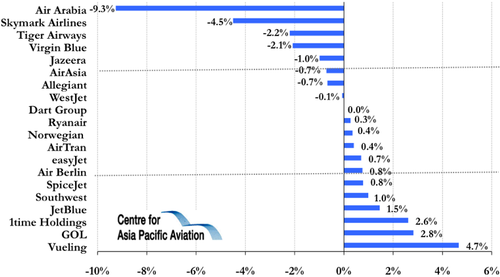