Jet Airways' shares suffered the most on Friday, down 5.3%, coinciding with news that the carrier is losing significant amounts of domestic market share, with Jet's domestic traffic falling 27.1% in May-2009.

Meanwhile, Bursa Malaysia Securities approved Malaysia Airlines' request for a suspension in the trading of its shares for one day on 12-Jun-09, coinciding with the release of the carrier's 1Q2009 financial highlights. The carrier posted its first operating quarterly loss (of USD39.3 million) since 3Q2006, due to a "triple squeeze" [of] overcapacity, extreme fuel volatility and a global slump which hit passenger and cargo demand". 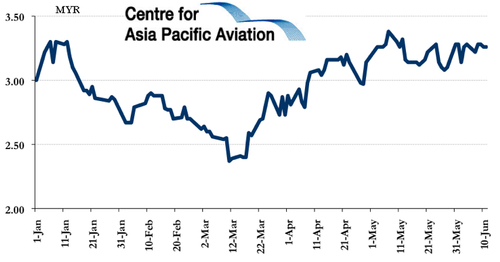 Announcing the results, in which the carrier also reported a 26.2% reduction in operating revenue and a net loss of USD198.8 million (representing a significant turnaround from the USD34.3 million profit in 1Q2008), CEO and Managing Director, Idris Jala, described 2009 as the toughest for airlines and stated the outlook remains challenging given the mounting yield pressures, with demand expected to remain soft in 2Q2009. Rival, AirAsia reported very strong profit growth in 1Q2009.

Meanwhile, Kingfisher Airlines and Singapore Airlines separately denied reports on a possible equity partnership between the two airlines. The carrier's shares were down 3.1% and 2.1%, respectively, on Friday. Singapore Airlines CEO, Chew Choon Seng, meanwhile, stated the carrier forecasts a recovery in demand at the start of 2010, adding, "my guess is we're in for an L (shaped recovery) for a while and even if a recovery comes along, it won't be a sharp V; it will be gradual upturn. I could be proven wrong - I hope to be proven wrong".

Elsewhere, Qantas shares were down 2.2%, following a 2.2% gain the previous day. 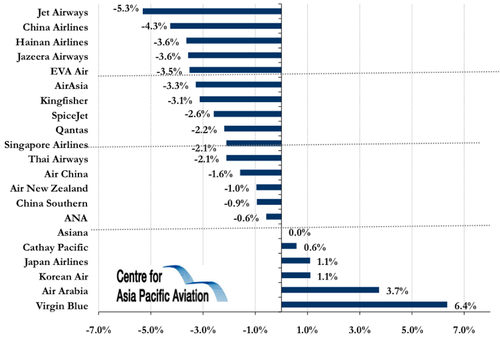