Shares in Virgin Blue gained 3.2% on Friday, the same day the carrier released its traffic results for Jun-2010 and Jul-2010.

In other Asia Pacific LCC news, AirAsia CEO Tony Fernandes stated Thai AirAsia and Indonesia AirAsia may look to convert their debt into equity when they seek listing, according to a Malaysia Business Times report on 30-Aug-2010. The collective debt of the two carriers is approximately MYR800 million. Mr Fernandes added that AirAsia’s 49% shareholdings in Thai AirAsia and Indonesia AirAsia would be diluted once they are listed.

Mr Ferndandes also said the carrier aims to increase ancillary income to USD19.14 (MYR60) per passenger in the next three years. Shares in AirAsia gained 1.9% on Friday.

Also in the region, Thai Airways President, Piyasvasti Amranand, commented that the carrier selected Tiger Airways as its partner to launch LCC JV, Thai Tiger Airways, after looking at a number of options, including Jetstar, Dragonair, Cebu Pacific and Lion Air.

Mr Amranand said Tiger was selected as it is financially the strongest and the two airlines have the “same business concept” and “same enemy”. The two are now revising a business plan, to include regional and domestic routes. Mr Amranand said the carrier would not be losing aviation slots to Tiger Airways as a result of the JV.

Cebu Pacific yet to decide on timing for IPO

Meanwhile, Cebu Pacific parent, JG Summit Holdings Inc, stated it is yet to decide the timing of plans to launch an IPO for the LCC. The company said the timing of the offer would depend on approvals from the stock exchange and securities regulator. 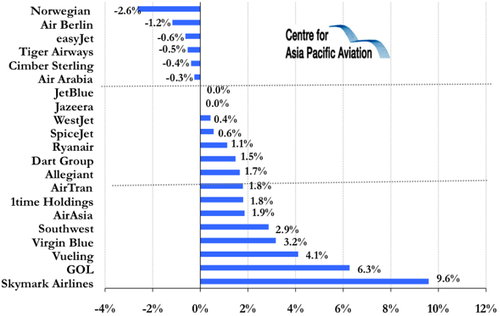