Virgin Blue freed to grow: Toll cuts loose - and not before time

Whatever the short term impact on Virgin Blue’s shareprice, Toll Holdings’ highly unusual move today to deliver an “in specie” dividend of 98.3% of its share in the airline to its shareholders is great news for Australia’s second airline. Toll has been sitting on its majority 62.7% holding since it bought it two years ago. Toll announced publicly last year that it was not a long term holder and attempted to sell its holding, but was unable to find a buyer prepared to pay the price it wanted.

In practical terms this has been a savage disadvantage for an airline which is being intensely challenged by market conditions, at the same time as it is metamorphosing into a higher yield-chasing operator. To compete for Australia’s domestic corporate market, Virgin has deviated from the LCC model to acquire a second aircraft type, Embraer regional jets, and is now on the brink of commencing B777 service to the US. Freeing up its ownership registry is almost certain to attract a flurry of interest, despite the carrier’s recent share price performance.

After failing to sell it for the past 18 months, this is a way out for Toll that appears simply designed to cut free an entity that was not helping its own perception in the market.

To be completed in August, the distribution will place Virgin Blue directly in the hands of a much wider range of shareholders. That is essentially a positive for the stock, which until now only had less than 12% of its equity fully tradeable on the market.

The last thing any company needed at such a significant time in its history was to have an unwilling parent. Another national airline, Ansett, suffered a similar and – in its case - eventually terminal fate after half-owner, News Ltd, conducted a protracted sale process over several years. While the ultimate collapse of Ansett rested with Air New Zealand’s ill-fated purchase from News, the orphaning of Ansett did little to help it compete in the 1990s against a revitalised and privatised domestic competitor.

Sir Richard Branson, the only other substantial Virgin Blue shareholder, at 25.5%, announced that Virgin Group “remains a long-term committed cornerstone shareholder,” with a “high degree of confidence in Virgin Blue’s business model and future.” Sir Richard, when asked earlier this year if his Group was a prospective buyer from Toll, replied “well, yes, if they would like to give it to us for nothing”.

Current major shareholders in Toll – and therefore recipients of proportionate direct holdings in Virgin Blue – are the Commonwealth Bank (6.8%); private investment organisation, Capital Group (6.3%, after selling 20% of their share last week); Toll’s Paul Little (5.6%) and Mark Rowsthorn (4.6%) are the only two others with over 4% of Toll’s equity. Apart from the two major owners of Virgin Blue shares, Toll and Branson, only CEO Brett Godfrey (2.7%) holds more than 2%. 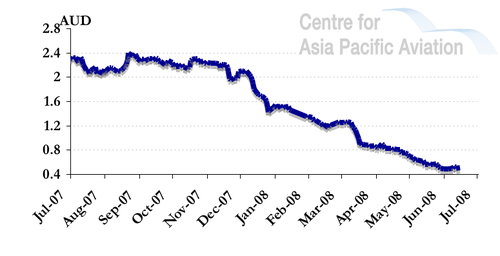 The announcement certainly puts Branson and the Virgin Group back in the box seat, as the largest holders of Virgin Blue. Whether or not this is what Branson would have preferred at this time is not yet clear, but the move certainly puts in play an airline that is potentially attractive to outside purchasers looking to gain quick entry to the still-lucrative Australian market.

Airlines like Singapore Airlines, Emirates and even possibly Virgin ally, AirAsia, will undoubtedly be huddling today to examine the opportunities. Singapore Airlines would not be keen to re-enter a partnership with Branson, while it is still trying to sell its 49% equity in Virgin Atlantic, but Toll’s unexpected move will open up a range of possibilities while the shares remain at bargain basement levels.

Toll acquired Virgin Blue as one of a bundle of entities when it bought Patrick in 2006. After a brief flirtation with the idea of integrating the airline into its wider freight operation (and establishing some joint venture arrangements, Toll has spent most of the past two years trying to sell. It has watched as Virgin Blue’s share price slumped from its near-AUD3 level to its recent low of 42 cents – and, in doing so, hurt Toll’s share price.

Toll Directors, Paul Little, John Ludeke, Bernard McInerney and Terry Mallon will resign from the Virgin Blue board following the distribution. Meanwhile, Mr Bob Watson resigned as a director, effective immediately. Toll’s Neil Chatfield will continue as Chairman until Virgin Blue’s AGM in October. The board will now form a committee to nominate additional independent non-executive directors and Chairman appointments, by the AGM.