Shares in Virgin Blue declined 3.2% yesterday, as the carrier estimated a pre-tax profit affect of AUD15 million-20 million (USD15-20 million) from an initial assessment of the reservations and check-in system outage, with the carrier adding it would actively pursue all avenues to recover the cost. The carrier, which uses a Navitaire/Accenture system, added that "prior to the outage, the group had seen an improvement in general trading conditions when compared to the corresponding period last year".

Shares in Tiger Airways slipped 2.0% yesterday. On the same day, the carrier reported a 17% increase in passenger numbers in Sep-2010 to 464,000, with an average load factor of 87% (a 1 ppt year-on-year reduction). The carrier added that forward bookings “remain strong”, especially over the Dec-2010 to Feb-2011 peak period.

On the other end of the spectrum, shares in Australia’s Skywest gained strongly up 6.7%. 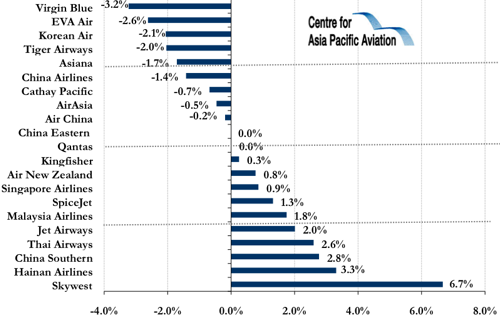