The Australian Competition and Consumer Commission granted conditional authorisation for three years for an alliance between Virgin Blue and Air New Zealand while separately approving its commercial partnership with Etihad.

Singapore Airlines’ shares slipped 1.3% to SGD15.26 yesterday. The carrier underperformed the broader market as it reported weakened load factors in Nov-2010. Load factors declined from 72.3% to 70.1%.

This prompted UOB-Kay Hian Holdings Ltd to lower its rating on the stock from “buy” to “hold”  and reduced its share-price forecast from SG18 to SGD15.90. RBS, meanwhile, commented: "The growing challenge for SIA is increasingly coming from the Middle Eastern carriers on the long-haul transit routes and also regionally from the lower-cost carriers. These competitive pressures (in terms of both pricing and service) are structural factors. They are challenges that are in place for the long term.”

ANA shares gained 1.7% yesterday. The carrier reported a 6.9% increase in domestic passengers to 3.6 million in Nov-2010 and a 10.2% jump in international passengers to 439,082, coupled with freight growth and load factor improvements.

Qantas shares declined 2.6% yesterday. The Australian BITRE Domestic Airfare Index pointed to another soft month in Dec-2010, with the average airfare across all cabin classes broadly flat year-on-year. While an improvement on yields in October (-2%) and November (-1%), it nonetheless highlights the continued impact that significant capacity additions, coupled with soft demand conditions, are having on yields, according to RBS.

AirAsia shares also declined by 2.6% yesterday. AirAsia confirmed that, through its fully owned subsidiary AA International Ltd it has entered into a partnership agreement with Antonio Cojuangco Jr, Michael Romero and Marianne Hontiveros to establish an LCC in the Philippines, AirAsia Philippines. 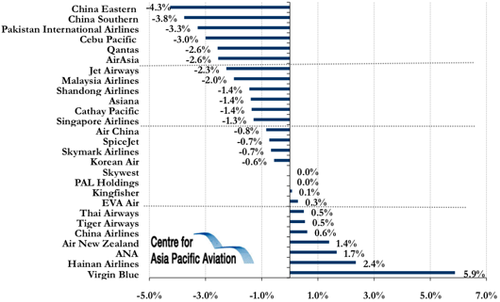