Shares in Virgin Blue slumped 7.0% yesterday to AUD0.40 cents, after the nation’s competition regulator (ACCC) issued a draft determination proposing to block a planned alliance with Air New Zealand. The ruling was Brisbane-based Virgin Blue’s second rejected collaboration in as many days after the US Department of Transportation blocked a proposed tie-up across the Pacific with Delta Air Lines.

Virgin Blue founder and President, Sir Richard Branson, criticised the determination stating the move blocked Virgin from competing on a level playing field and that the expansion of Virgin Blue depends on the regulator's co-operation, warning that without alliances, the carrier may be forced to change its strategy and suspend some unprofitable routes. However, he admitted the “couple of setbacks” the carrier has had over the past week are “nothing that we won't be able to overcome”. Virgin Blue CEO, John Borghetti, also stated the airline plans to fight the draft ruling.

Another heavy decliner on Friday was Skymark. Skymark’s largest budget carrier dropped the most in seven months in Tokyo trading on Friday, slumping 5.9%, as ANA announced plans to launch a LCC. Shares in ANA remained unchanged. See related article: ANA and First Eastern to form “the first Japanese low-cost airline”

Cathay Pacific shares gained 1.7% on Friday, coinciding with the carrier’s Aug-2010 traffic releases. The carrier commented that economy traffic “remained strong” in the month, with “very robust demand” out of Hong Kong, particularly on long-haul routes and to holiday destinations in Southeast and Northeast Asia.

Cathay added that the China market again “was solid”, both on trunk routes to Beijing and Shanghai as well as to secondary cities, with a “good performance” in the premium cabins. However, Cathay conceded that premium revenues and volumes “remained below pre-downturn levels”. Meanwhile, cargo traffic in Aug-2010 “was not quite as strong” as in Jul-2010, with tonnage growth “some way behind” capacity growth. However, the carrier expects to see a pick-up in the last quarter of the year.

Also in North Asia, Air China on Friday announced the purchase of four B777-300ER aircraft from Boeing, for delivery in stages from mid-2013 to mid-2014. The carrier stated the base price of the aircraft is approximately USD1,150 million, although Air China added: "Boeing Company has granted to the company significant price concessions with regard to the Boeing aircraft."  Shares in Air China slipped 0.9% on Friday. 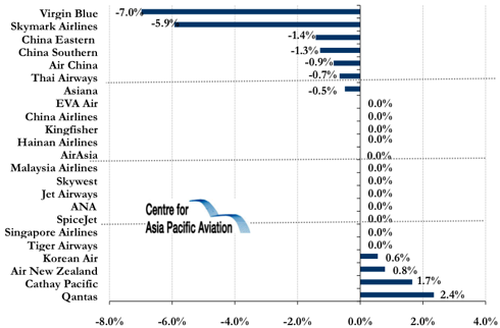